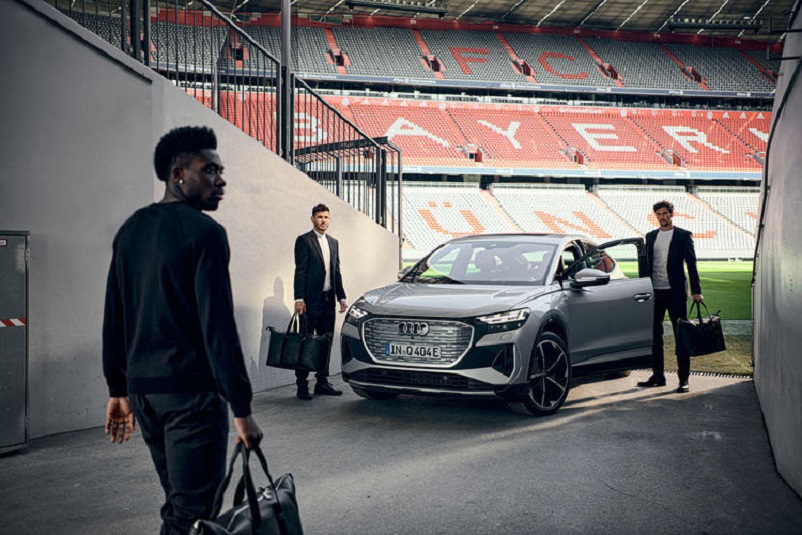 From July 23 to 31, the Audi Summer Tour will again connect fans from all over the world with FC Bayern in 2021

The coronavirus pandemic is unfortunately still preventing exciting soccer events from being held in front of large crowds in Germany. Thanks to the Audi Summer Tour, however, FC Bayern fans will still be able to experience their favorite stars this year. Fans from all over the world are invited to take part in the preparations for the season digitally and enjoy rare glimpses behind the scenes.

The first highlight of the Audi Summer Tour is a test match on July 24, when FC Bayern will take on top Dutch club Ajax Amsterdam at the Allianz Arena as part of the “Audi Football Summit.” The match will be broadcast live by RTL. Currently, up to 500 spectators are allowed to attend the match. Anyone who wants a ticket can submit a request through the FC Bayern online store. The ticket prices range from twelve to 50 euros.

“We would all like to see fans return to the stadiums soon. Nevertheless, the Audi Summer Tour in 2020 already impressively demonstrated the opportunities offered by digitalization and brought fans from the most distant corners of the world closer to their idols. We’re looking forward to a fantastic tour and a successful new season alongside our partner FC Bayern,” said Hildegard Wortmann, member of the Board of Management for Sales and Marketing at AUDI AG.

Despite the restrictions in place to stop to the spread of the coronavirus, FC Bayern already gave fans access to the team and offered them an interactive experience last year via the Audi Summer Tour – primarily through digital media, but also live and in person at the stadium. As the pandemic situation continues to prevent normal preparations and gatherings with crowds of fans, FC Bayern is continuing the Audi Summer Tour along similar lines as last year, while also offering numerous additional attractions.

From July 23 to 31, fans will be able to follow new coach Julian Nagelsmann getting their favorite team ready for the season in real time from around the globe.

“During this pandemic, we as a club have once again experienced how strong the cohesion is in our FC Bayern family – we’re close, despite the distance that the coronavirus forces us to maintain. Through our Audi Summer Tour, we’re giving fans around the globe access to the team and offering them an interactive experience, even in this era of the coronavirus. We all hope that by next summer, we’ll be able to take our players on the road again,” said Oliver Kahn, member of the Executive Board of FC Bayern.

“The Audi Summer Tour is an important part of our internationalization efforts. In addition to the match against Ajax Amsterdam, the focus is on directly interacting with the fans. Together with our partner Audi, we want to use the many activities to give people around the world the chance to engage with our club, our players, and our brand as closely as is possible during the pandemic. Our supporters already know from the last Audi Summer Tour that they can look forward to plenty of exciting content again this summer,” said Jörg Wacker, member of the Executive Board of FC Bayern responsible for internationalization and strategy.

As part of the Audi Summer Tour, numerous FC Bayern stars will also be facing off in special competitions. Defensive specialists Manuel Neuer, Joshua Kimmich, Alphonso Davies, and Lucas Hernández will duke it out with goal scoring machines Robert Lewandowski, Kingsley Coman, Serge Gnabry, and Jamal Musiala in a penalty kick challenge, in teqball – the latest sports craze which is a cross between soccer and table tennis – and in other exciting and unusual athletic events.

In addition, FC Bayern will be providing numerous glimpses behind the scenes, such as in-depth answers to questions about professional players’ diet and mental training, with current players and legends from Germany’s most successful soccer club also making appearances. The Audi Summer Tour will offer fans numerous opportunities to join in the action, such as the global “FC Bayern World Run” initiated together with adidas for the “World’s Biggest Sports Family.”

A fan club tournament and other fan activities will also be taking place in China. With all these highlights in store, the summer of 2021 is certain to be the summer of Audi and FC Bayern.