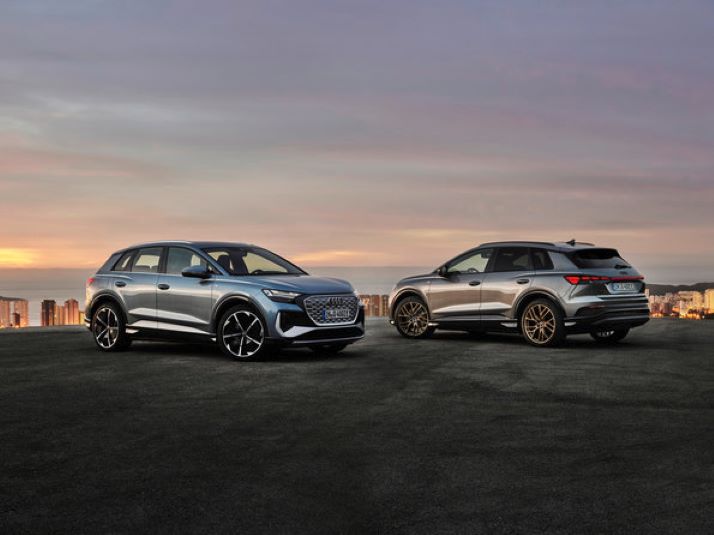 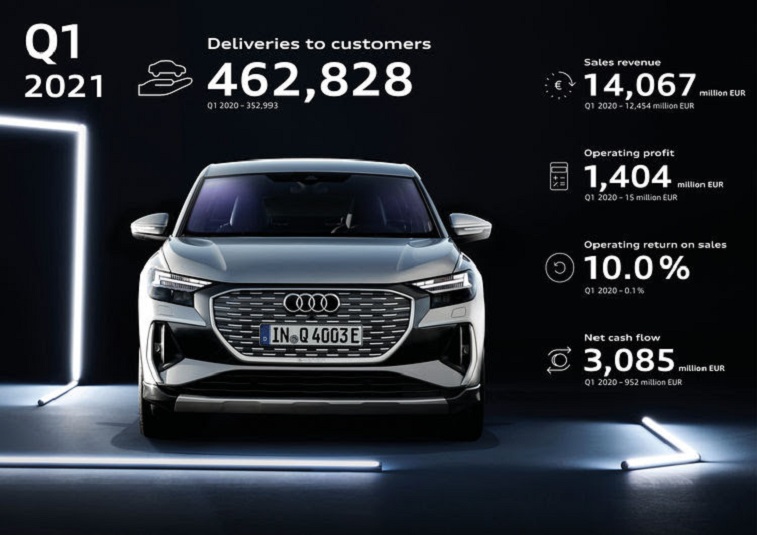 CFO Rittersberger: “Investments for the future are an important driver of the transformation”

The Audi Group has carried the impetus of the year-end surge over to the first months of 2021: in the opening quarter, deliveries, sales revenue, and operating profit increased significantly compared to the previous year’s figures, which were marked by the pandemic. The operating return on sales was 10.0 percent.

Following solid year-end figures, Audi started the new year successfully, with strong business in China and the USA. Thanks to consistent discipline in investments and costs, as well as effects deriving from the previous quarter, net cash flow reached a high level at €3.1 billion and confirmed once again the financial strength of the Four Rings.

With the world premieres of the fully electric Audi e-tron GT and Audi Q4 e-tron families of models in February and April, Audi is also significantly raising the pace on its way to becoming a premium provider of electric mobility.

Between January and March the company delivered 462,828 vehicles (2020: 352,993) of the Audi brand to customers,over 31 percent more than in the pandemic-influenced previous year. The Four Rings therefore progressed better than the total worldwide market for cars, which rose by around 20 percent.

Continuing strong customer demand shows that the company is well positioned with its present product portfolio. In the first three months, the premium manufacturer Audi achieved a clear increase in comparison to the previous year, especially with its Q models and in the upper-range vehicle categories. Deliveries of the Audi e-tron models were one quarter higher than in the year before (+27 %).

Differences between the sales regions are apparent: in the Chinese market, the brand with the Four Rings achieved the best quarter in its company history (207,386 vehicles). In the USA, too, Audi had the best start to a year in the history of the company: with almost 55,000 deliveries, the brand handed over more cars to customers than ever before in the first quarter.

In Europe, as a result of the effects of the continuing corona pandemic and associated restrictions, and also due to shortages of semi-conductors, the Four Rings concluded the first quarter of 2021 slightly below the previous year (-6.1%).

The models Audi Q7, Audi Q8, Audi e-tron and Audi A6 were extremely successful in the USA and China. In Europe, sales of the Audi Q3 had an especially favorable effect on revenue. Sales revenues of Lamborghini also exceeded the already high level of the previous year at €509 million (2020: €483 million).

Operating profit significantly higher than in the previous year

For the first three months of the year, the Audi Group produced an operating profit of €1,404 million (2020: €15 million). The operating return on sales revenue increased to 10.0 percent (2020: 0.1 percent). The high level of profits and profit margin reflects both the strong operating performance and positive valuation effects in ensuring raw materials supplies, amounting to €0.7 billion compared to the previous year’s quarter. Favorable influences on profitability in the opening quarter also derived from advantageous price and mix effects, for example a significant fall in sales support measures.

“A driver of the transformation”

“The past months have clearly shown how well the Audi Group is positioned. We have taken the strong momentum from the fourth quarter into the year 2021, continued to reduce costs in a measured way, and given priority to future projects. As part of the Volkswagen Group, we at Audi take advantage of synergies that other premium manufacturers can hardly match. A good example of this is the new, fully electric Audi Q4 e-tron based on the group-wide MEB platform,” says Jürgen Rittersberger, who became the new CFO at Audi on 1 April 2021. “We are focusing, as before, on securing and strengthening our financial basis for the future. Only in this way can we push ahead with our aims to innovate and our transformation into a supplier of networked, sustainable premium mobility. Our investments are therefore an important driver of the transformation.”

A main theme of the first quarter was the e-roadmap: with the world premieres of the Audi e-tron GT series in February and the Audi Q4 e-tron series in mid-April, Audi has increased the number of fully electric models in its product range.

The electric portfolio has therefore been expanded through the addition of four more models: the e-tron GT quattro1, RS e-tron GT2, Q4 e-tron, and Q4 Sportback e-tron. With the Audi Q4 e-tron series, the company presented its first all-electric car in the compact segment. In addition to being produced in the multi-brand Volkswagen plant in Zwickau, the Q4 e-tron is also based on the “modular electrification toolkit” (MEB) of the Volkswagen Group, which provides a highly versatile and variable platform for many fully electric models. With the Q4 e-tron, Audi is using the high level of synergies in the Volkswagen Group.

For the first quarter, the Audi Group posted pre-tax profits amounting to €1,689 million (2020: €545 million). The financial result declined to €285 million (2020: €530 million). In comparison to the previous year, the reason for this fall is the sale within the Volkswagen Group of Audi Electronics Venture GmbH, which had made a positive contribution to the financial result in the first quarter of 2020.

This former Audi subsidiary is the basis of the software unit of the Volkswagen Group, which now operates under the new brand name CARIAD. In contrast to this, strong business in China had a positive impact on the financial result.

In the first quarter, net cash flow reached €3,085 million (2020: €952 million), underlining the high self-financing capability of the Audi Group. Alongside solid profitability and continued discipline in investment, the Four Rings also benefited from the delayed effects of the high-volume fourth quarter. In December especially, deliveries were at a very high level, meaning that some incoming payments were shifted into the first quarter of 2021.

The company continues to be cautiously optimistic about the coming months. In addition to the effects of the corona pandemic, the situation with regard to semi-conductor supplies is still tight. Thus the forecast remains unchanged: for the year 2021 as a whole, the Audi Group expects deliveries and sales revenue to be significantly above the previous year’s figures. The company’s planning foresees an operating return on sales of between 7 and 9 percent. For net cash flow, the Audi Group expects a figure between €3.5 and 4.5 billion.