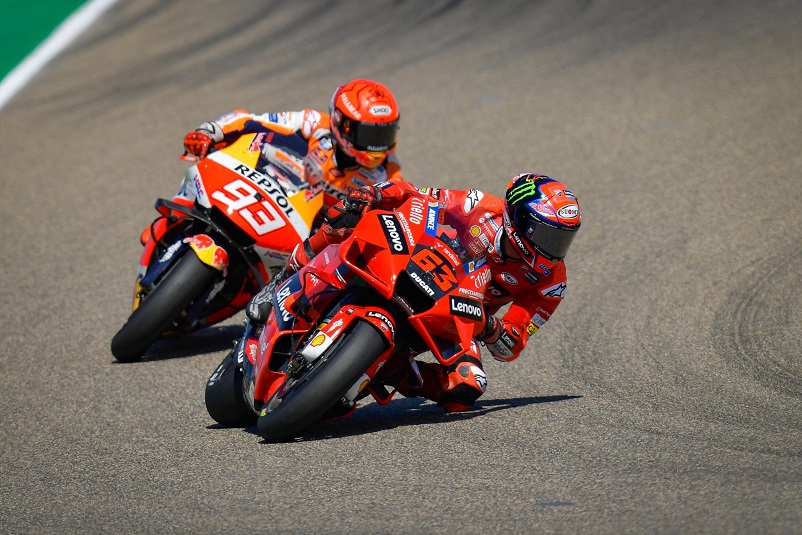 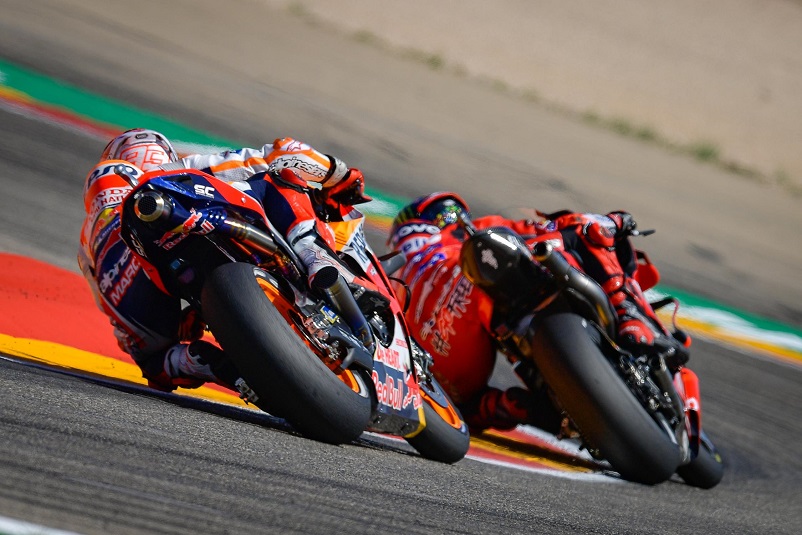 Ducati vs Honda, Italy vs Spain: Pecco claims maiden victory in a spectacular battle vs the eight-time World Champion at MotorLand

After a trio of second place finishes in 2021, Francesco Bagnaia (Ducati Lenovo Team) is finally a MotoGP™ winner after emerging victorious from an enthralling Gran Premio TISSOT de Aragon battle with Marc Marquez (Repsol Honda Team). The duo were in a league of their own on Sunday afternoon as the 25-point haul fight goes down to the wire; reigning World Champion Joan Mir (Team Suzuki Ecstar) claims the final podium spot in P3.

Pecco vs Marc Marquez – a battle for the ages

As the lights went out for the main event in Aragon, polesitter Bagnaia got away well and held P1 into Turn 1, with Jack Miller (Ducati Lenovo Team) going in a bit deep up the inside. This allowed Marc Marquez to grab P2 from fourth on the grid, Aleix Espargaro (Aprilia Racing Team Gresini) was up to P4 with Fabio Quartararo (Monster Energy Yamaha MotoGP) 5th. Alex Marquez (LCR Honda Castrol) was down at Turn 5 on the opening lap, the 2020 podium finisher gingerly walked away, as the rest of the riders completed Lap 1.

In the early stages, Quartararo was struggling. Mir and Jorge Martin (Pramac Racing) passed the Frenchman as Quartararo slipped into the clutches of eighth place Brad Binder (Red Bull KTM Factory Racing). Up front, Bagnaia and Marc Marquez had opened up a 0.5s advantage over Miller at the beginning of Lap 4.

Every rider was running the soft Michelin rear tyre, and tyre management was key. Nobody in the early stages was showing their cards, with 2.2s covering the top six. Quartararo was seventh and had the rapid starting Iker Lecuona (Tech3 KTM Factory Racing) climbing all over him, and at the end of Lap 6, Lecuona was through. A couple of laps later, another KTM was ahead – Binder following Lecuona through, Quartararo was down to P9. 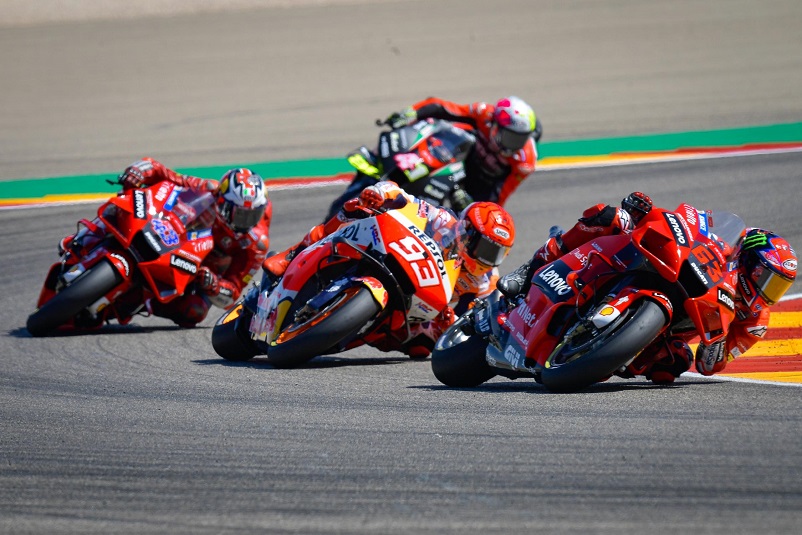 With eight laps gone, Bagnaia and Marc Marquez were now 1.2s clear of Miller. That advantage was soon up to 1.9s with 13 laps to go, as Miller then took the car park route around Turn 16. The Aussie was wide which allowed Aleix Espargaro and Mir to cut through, the reigning World Champion then soon got the better of Espargaro for P3. The gap to Pecco and Marquez was now 3.3s, the top two showing superior pace as the race approached half distance.

Bagnaia and Marquez were exchanging 1:48s lap after lap, with the rest languishing in the 1:49s and below. The duo had a 4.3s lead over Mir and Aleix Espargaro with nine laps to go, but this was now the territory of the race where tyre life was crucial. Who had conserved their soft rear tyre best? With six to go, no change. Still both riders were in the 1:48s, and they were again with five to go.

With four laps left, Marquez was closer than he was on previous laps. Then, with three laps to go, the first move was made by Marquez. The HRC star lunged into Turn 5, but he was in a little hot and slightly wide. Pecco was back into the lead. Marquez then shoved his RC213V up the inside at Turn 15, but again, Pecco got the cutback and held P1.

Two laps left in Aragon. It was an exact copy and paste at Turn 5, Marquez again lunging late, but there was no way through. The exact same thing happened on the same lap at Turn 15, but again, Bagnaia carved back past. Then it was time for an epic final lap. Marquez tried his luck at Turn 1 this time, but it didn’t stick. Turn 5 then reared its head and for the third lap in a row, Marquez was up the inside, before Pecco fought back.

That was six overtakes that hadn’t stuck for the eight-time Champion, a seventh attempt then came at Turn 12. Marquez got a great run out of the Marc Marquez Corner and was up the inside at the downhill left-hander. Struggling to get it hooked up to the apex, Marquez was wide and onto the green turf, which allowed Pecco to hold P1. With Marquez as wide as he was, it was battle won for Pecco. Ducati’s star made no mistake and crossed the line to complete a perfect weekend: pole position to maiden MotoGP™ victory, the eighth winner of 2021.

0.6s split the top two in the end, Marquez threw everything in his locker to try and win for the seventh time in Aragon, but the number 93 was happy with P2. Mir returns to the rostrum for the first time since the Styrian GP, that’s his fifth rostrum of 2021. 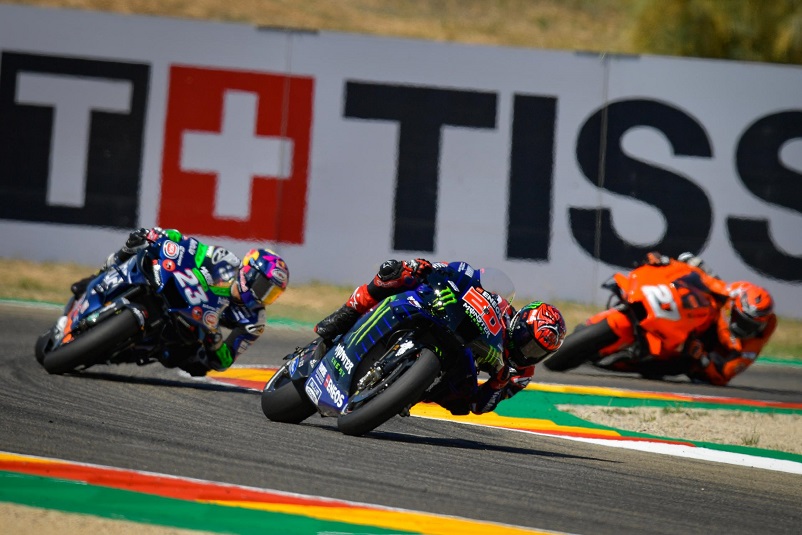 Aleix Espargaro couldn’t hold onto the reigns of Mir in the closing stages, but a P4 is another excellent ride from the Spaniard. Miller couldn’t recover from his mistake and finished a lonely fifth, as reigning Moto2™ World Champion Enea Bastianini (Avintia Esponsorama) claims sixth for his best premier class result. The impressive rookie beat Binder by 0.3s, and 2.5s behind the South African was Quartararo. A tricky day at the office for the World Championship leader, his second worst result of the season, but his lead is still a healthy 53 points with five races to go.

Martin took P9 less than a tenth behind Quartararo, with Takaaki Nakagami (LCR Honda Idemitsu) taking 10th in the same pack. Lecuona made a mistake with a handful of laps to go saw the Spaniard slip outside the top 10, it was nevertheless a great ride from the 21-year-old, as Alex Rins (Team Suzuki Ecstar) pocketed P12 from P20 on the grid.

A magnificent MotorLand battle sees Bagnaia finally claim that illustrious first MotoGP™ win. Next up: his home race at Misano.