Home International The battle of Aarhus -a perfect start 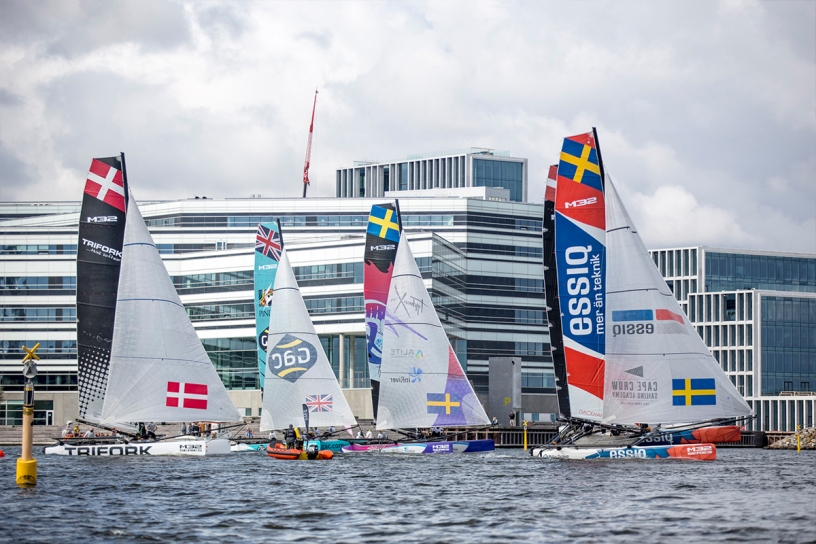 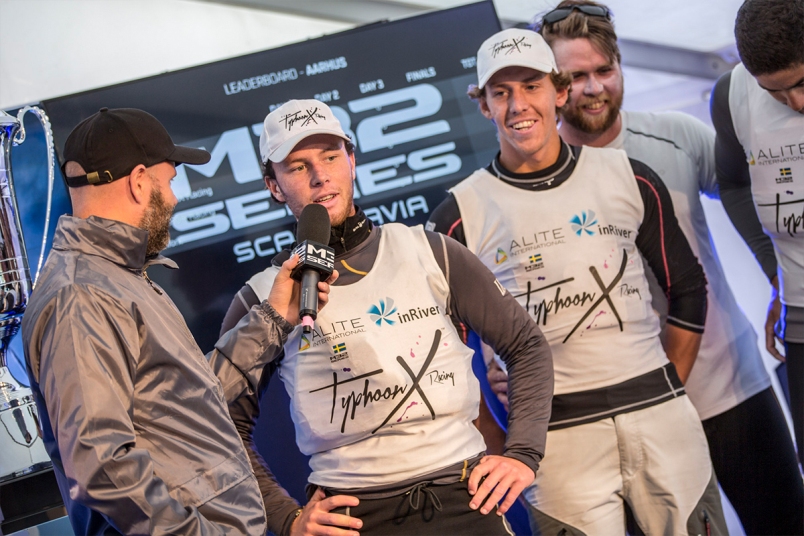 The third event of the Scandinavian Series got off to a near perfect start today, graced with consistent northeasterly winds in the inner city of Aarhus.

Right next to the city center the five teams delivered action packed sailing from the onset, getting through seven races in total. The city couldn’t have asked for a better premier of its inner harbor basin.

The crowds got a bang for the buck today in the second-largest city of Denmark, when the M32s were let loose on the inner waters of Aarhus as the first boats in history. With three days of fleet racing ahead the competition was fierce throughout all seven races with British Ian Williams (GAC Pindar) and Swedish Nicklas Dackhammar (Essiq Racing Team) showing impressive strength ahead of the rest.

The two teams ended the day in a tie with 16 points each but Williams topped the podium as a result of his three wins as oppose to Dachhammar’s two.

“It was a good day of racing. Nicklas (Dackhammer) and I went a bit head-to-head and created a decent lead on the rest of the fleet,” says Williams and adds, “but it’s a long regatta with plenty of races to go, so we will keep our heads down and just continue at it.” The six-time World Match Racing Champion who has sailed most stages of the Series with the same crew (Brad Farrand, Mark Bulkeley and Garth Ellingham) will make a crew-swab tomorrow to practice a new constellation with fellow Brit, Richard Sydenham onboard. The two countrymen have sailed together for many years, winning multiple titles and now Sydenham could be joining Williams once again for next year’s Match Racing Tour in the M32s.

Over on Dackhammar’s boat there was also new crew onboard the team today. That however didn’t seem to affect the young Swede’s performance – in fact his ambition is quite clear: “We have looked forward to the Series this year and are aiming at winning it,” says the young sailor, who currently holds the overall third-place in the Series with Williams and Taylor Canfield ahead. But with Canfield not sailing in Aarhus the game is open.

The two local teams, Team TRIFORK and TREFOR Racing, ended at the bottom of the chart today despite audiences doing their best to cheer the local heroes on. With 26 points, Nicolai Sehested is just one point in front of Jes Gram-Hansen, who had a series of bad starts on the water today.

“Nothing is settled yet. We’ve seen how quickly things can change in the M32s. So for us – tomorrow’s a new day,” says the experienced skipper at today’s After Sail. In front of the two Danes is Swedish Måns Holmberg on TyphoonX Racing with 24 points, landing him the overall third place.

Battle of Aarhus runs from Thursday  the 18th of August until Saturday 20th of August, with racing from 2PM – 5PM daily. For news and live commentary go tom32series.com