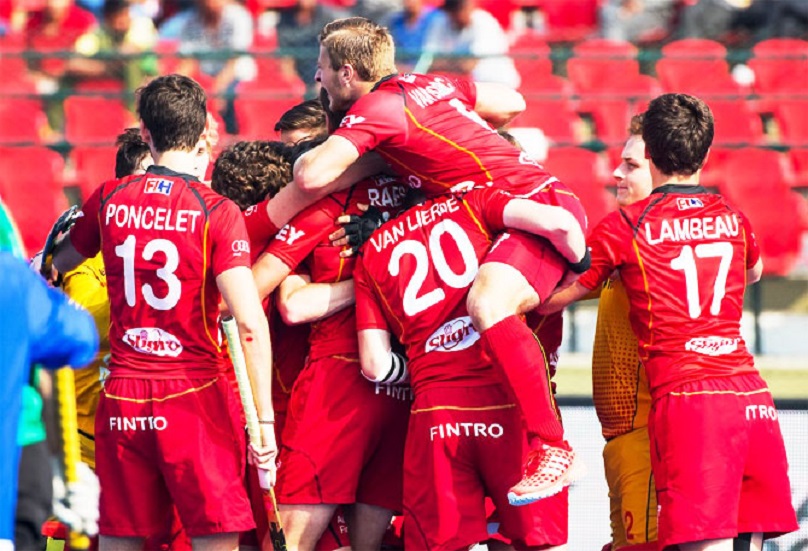 Final will be played on Sunday 18th December 2016

Belgium and India will meet in the Final of the Uttar Pradesh Hockey Junior World Cup Men Lucknow 2016 after winning their respective Semi-Final matches on Friday (16th December).

Goalkeeper Loic van Doren was the hero in the shoot-out as Belgium ended Germany’s hopes of winning a third successive title, following their triumphs in 2009 and 2013. Belgium’s opponents will be the host nation, who conquered Australia in front of a noisy and colourful capacity crowd at the Lucknow’s Major Dhyan Chand Hockey Stadium.

Germany and Australia will compete in the bronze medal match, which takes place ahead of the mouthwatering title match between first time finalists Belgium and 2001 winners India on Sunday 18th December.

In the first Semi-Final, Belgium’s Red Cougars were marginally the better team in opening period, with Germany goalkeeper Lennart Küppers being forced into making two smart saves from the lively Thomas Verheijen. Germany looked a different side in the second half, with the exceptional Timm Herzbruch causing the Belgian defence no end of problems and keeping shot-stopper Loic van Doren extremely active.

Germany’s Jan Schiffer came closest to breaking the deadlock with a far post deflection, but failed to hit the target.
Belgium took an early lead in the shoot-out when Loic van Doren forced an error from Philip Schmid, but a fine save from Germany’s Niklas Garst, who replaced Küppers for the shoot-out, left things level after four rounds.
The decisive moment arrived when Van Doren denied Timm Herzbruch, before Robbert Rubens slammed the ball home to send an elated Belgium into their first men’s Junior World Cup Final.
Referring to his form in shoot-outs, Belgian shot-stopper Loic van Doren said: “I’ve been training a lot, analyzing all the stats and all the movements, and I think all of that training helped us win today. We are really going for gold now. We’re in the final it is going to be an amazing game.”
Nearly 7000 fans were in the stadium to watch host nation India in Semi-Final action against Australia, and they were treated to an absolutely thrilling contest. Tom Craig put Australia ahead in the first half, but Gurjant Singh pulling India level with a stunning run and backhand finish in the 48th minute before Mandeep Singh’s superb steal and shot put the hosts into a 2-1 lead.
Lachlan Sharp made it 2-2 in the 57th minute, which proved to be the final goal of the game. Much to the delight of the home fans, India scored all four of their efforts in the shoot-out with Matthew Bird and Lachlan Sharp proving unsuccessful as India reached their first Junior World Cup final since winning the competition in 2001.
Earlier in the day, a last-gasp strike from Koji Yamasaki gave Japan a 2-1 victory over Asian rivals Korea and seal a 13th place finish in the competition. Kota Watanabe scored in the 55th minute to give Japan the lead, but Korea restored parity thanks to Oh Seyong, who showed quick reflexes to volley home a shot that hit the frame of the Japanese goal.
Yamasaki’s goal arrived from an overtime penalty corner, deflecting in from five metres out to condemn the Koreans to a 14th place finish.
Egypt were winners of the 15/16 Place play-off, defeating Canada 2-1 in what was the opening match of the day. Rohan Chopra gave Canada the lead at the end of the first half when he forced home a saved penalty corner from close range before Mohamed Gadelkarim’s penalty corner drag-flick levelled the scores with 12 minutes remaining.
Ahmed Elganaini hit the winner three minutes from the end of the match, cracking a fierce backhand effort into the top right corner to seal a 15th place finish for the African champions.
Tickets for the event, which is taking place from 8-18 December, are on sale and can be purchased by clicking here.
Fans can find scores, standings, fixtures, photos, videos and more via the official event website on FIH.ch as well as through FIH Twitter, Facebook and Instagram using the hashtags #HJWC2016 and #RockTheJuniors.