Home 2021 Bennett from green to yellow and white 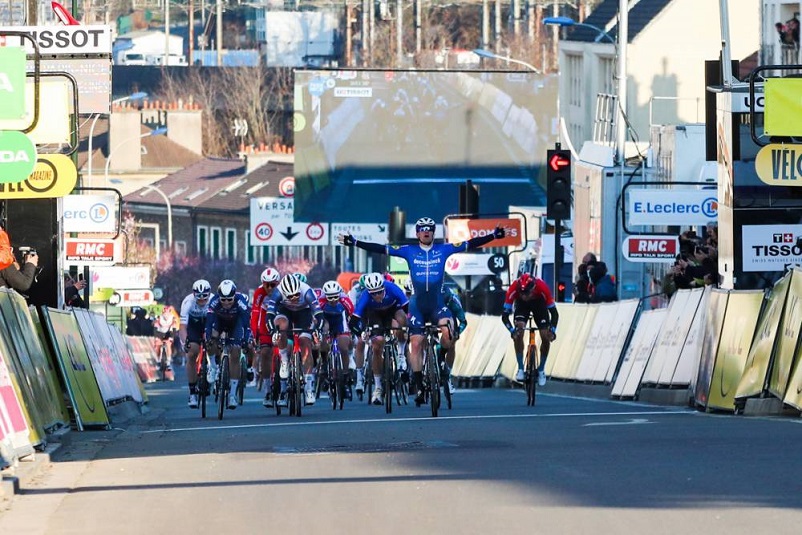 Ireland’s Sam Bennett returned to French roads in Paris-Nice on Sunday to seize the yellow and white leader’s outfit of the Race to the Sun for the first time. The Tour de France green jersey holder was perfectly led out by his Deceuninck Quick Step team-mate Michael Morkov to snatch his third win of the season after two stages of the UAE Tour.

The Irishman overpowered France’s Arnaud Demare and former wofld champion Mads Pedersen in a 166-km first stage around St Cyr L’Ecole, fatal to 2013 and 2015 winner Richie Porte, who crashed with 33 km to go and was forced out on the first day.

Doubey’s solo The real start was given at 13:07 to all 161 riders. It took 16.5 km for Fabien Doubey (Total Direct Energie) to finally break on his own. The Frenchman, going for KOM points, led the peloton by 5:20 at best (Km 33) and bagged three points at the top of Cote de Senlisse (km 49.2) ahead of the peloton led by Tim De Clercq (Deceuninck-Quick Step) and Julien Bernard (Trek Segafredo). Doubey collected three more points on Cote de Meridon (km 55.8) and went on to win the bonus sprint in Chateaufort (km 66) ahead of Michael Matthews (Team Bike Exchange) and Ben Swift (Ineos Grenadiers).

Four in the lead At the end of the first loop (km 81), the gap was down to 3:25. Doubey’s lead gradually melted until kilometre 115, when four riders finally reined the Frenchman in – Philippe Gilbert, Stefano Oldani (Lotto Soudal), Antony Perez (Cofidis) and Chris Lawless (Total Direct Energie). As Lawless let them go, the four remaining escapees led the pack by some 20 seconds with 50 km to go. The pack remained within 30 seconds of the four breakaways as a few crashes took place in the bunch involving Dylan Teuns, Oliver Naesen, Ben O’Connor and later Matthias Brandle and Sander Armee.

Porte out of the race 33 km from the line, Richie Porte crashed in turn and the 2013 and 2015 Paris-Nice winner halted, suffering from lower back pains, before deciding to try and complete the stage the best he could. But he was forced to call it quits with 15 km to go, having given it his all. Doubey clinched more points in the second ascent of Cote de Senlisse, securing the polka-dot jersey, and then relaxed, leaving Gilbert, Oldani and Perez to keep fighting. But the trio were also reined in at kilometre 139. Another Lotto-Soudal rider, Kobe Goosens, also tried his luck with 25 km to go as Maxime Bouet (Arkea-Samsic) and Kaden Groves (Bike Exchange) also hit the tarmac.

Last attempts The Belgian was caught with 17 km left, shortly before the second bonus sprint up the Chateaufort wall, won by Michael Matthews ahead of Tiesj Benoot (DSM) and Jasper Stuyven (Trek Segafredo). After the sprint, seven riders went in turn. France’s Pierre Latour surged, taking six other riders with him: Soren Kragh Andersen (DSM), Dylan Teuns (Bahrain), Mattia Cattaneo (Deceuninck Quick Step), David De la Cruz (UAE), Cyril Gautier (B&B) and Kristian Sbaragli (Apecin). But they were caught in the finale as the sprinters teams started to position themselves. Deceuninck-Quick Step first seemed a little blocked at the back but they delivered perfectly for Sam Bennett to surge behind Arnaud Demare and Mads Pedersen to easily upstage the Frenchman and the Dane and raise his arms for his fourth stage win in the Race to the Sun and his first leader’s jersey.