Australian Jack Bobridge led a defiant breakaway group of four cyclists to take the first stage of the UCI season-opening Tour Down Under in South Australia on Tuesday.

Bobridge, riding for the local UniSa team, made his move with 200 metres to go to outsprint his rivals and win the 136.2-kilometre stage in two hours 59 minutes, 44 seconds.

Fellow breakaway riders Lieuwe Westra (Astana), Luke Durbridge (Orica GreenEdge) and Maxim Belkov (Katusha) finished just behind Bobridge, only metres ahead of the peloton, which left their run too late and failed to reel in the four leaders.

The Tour Down Under began in the Barossa Valley wine growing town of Tanunda Tuesday morning in overcast and muggy conditions.

The break began after just five kilometres and although the four riders never built a massive lead, the peloton wasn’t interested in chasing them down.

The lead was still over a minute when they reached the bottom of the climb up Checkers Hill, but soon after the summit it was down to 16 seconds and it looked as though the front group would be swallowed up with 10 kilometres to go.

But the peloton eased up and the leaders were again able to get away and when they were 40 seconds out with three kilometres to go it became clear that they would hold on for a rare successful break.

The leaders began to play cat and mouse as the finish line neared, with Belkov trying to force the issue with a kilometre to go.

However, Bobridge kept his nerve and attacked on an uphill stretch 200 metres from the finish to claim the first ochre leader’s jersey of the 2015 race.

Bobridge admitted he was surprised the group was able hold on until the end.

“To be honest coming through Williamstown at halfway, the lead was down to 30 seconds and all the guys had given up,” he conceded.

“We played the big game at the end and stayed away.”

Bobridge grew up in Adelaide and said that had been a huge help.

“The biggest advantage was knowing the roads. I don’t know how many times I’ve been up that road  — it was a massive advantage,” he said.

He also said he had to resist the urge to attack too early towards the finish when the peloton was closing so quickly.

“When you see a bunch charging at you that hard it’s pretty nerve-racking and it’s pretty easy to go early,” he said.

“But I kept my nerve and it worked out perfectly.” 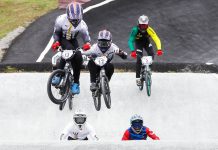 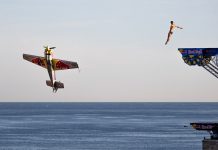 The Volare Duet – first ever synchro flight of airplane and...