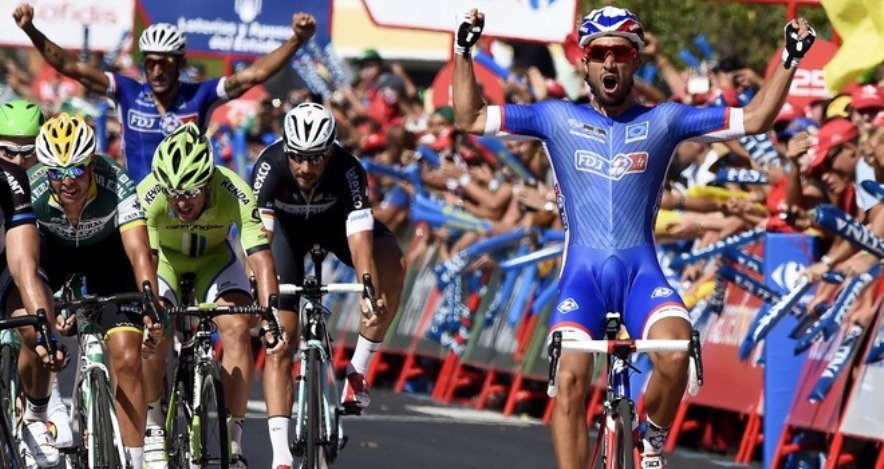 France’s Nacer Bouhanni won his second stage of the Vuelta a Espana in controversial circumstances as he edged out Australia’s Michael Matthews at the finish line of Saturday’s 207km eighth stage from Baeza to Albacete.

Bouhanni appeared to cut across Matthews as he surged for the line in a time of 4hr 29 mins with Slovakian Peter Sagan in third.

There was no change in the general classification as all the leaders finished with the same time, so Spaniard Alejandro Valverde maintains his 15-second lead over Movistar teammate Nairo Quintana.

The longest stage of the tour saw the race finally leave Andalusia after a week in the southern region and without any categorised climbs the downhill finish into Albacete favoured the sprinters.

However, there was nearly a significant move in the overall standings as the fast pace saw the peloton split with 25km remaining.

Whilst the rest of the race favourites Valverde, Froome and Contador were at the head of the lead group, Quintana found himself 30 seconds behind in the chasing pack and had to put in a strong effort in the final 10km to ensure he didn’t lose any time.

“It was a crazy end. The wind was causing problems, but in the end we managed to save the day,” said Valverde.

“I was aware of it. I didn’t know exactly if Quintana was closing or not, but I couldn’t look back I just had to keep going at the front.”

The race returns to the mountains on Sunday with a second summit finish of the tour on the 185km stage from Carboneras de Guadazon to Aramon Valdelinares. – Agence France-Presse