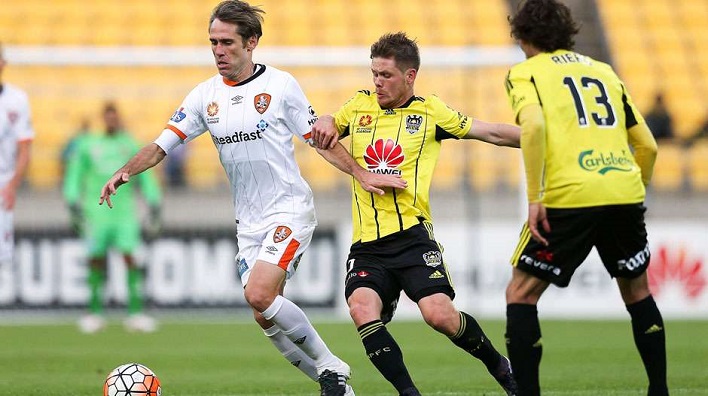 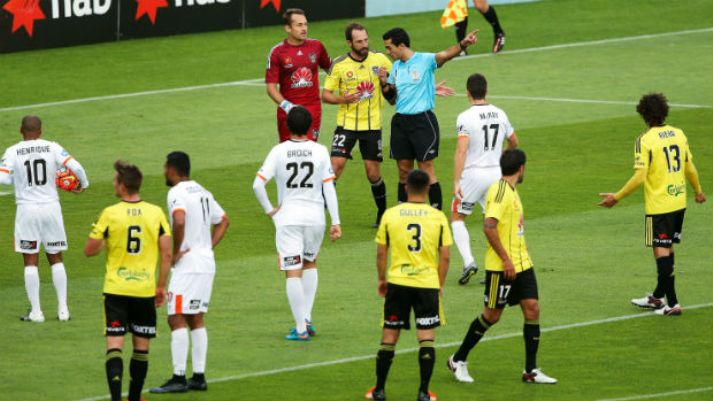 Brisbane Roar have regained the outright lead on the Hyundai A-League table after playing out a tense 0-0 stalemate with the Phoenix yesterday.

A combination of international duty, injury and suspension saw both sides field vastly different starting line-ups at Westpac Stadium in a fixture that has traditionally rained goals.

With Jamie Maclaren and Brandon Borrello both in Olyroos camp, Jean Carlos Solorzano was handed the chance to lead the line for the Roar and he had the best of his side’s chances in the first-half.

A curling effort from the Costa Rican on the edge of the box was cleared by the head of Andrew Durante, while the 28-year-old also fired a point blank shot from a cross into Glenn Moss.

The Phoenix had their own absences to manage, with seven first-team players missing as they tried to arrest a four game winless run.

With striker Roy Krishna set to be sidelined for three months Michael McGlinchey took on more responsibly up front and drew a fine save from Jamie Young shortly before the break.

Phoenix substitute Kwabena Appiah looked the most likely to break the deadlock in the second-half with a lively contribution off the bench.

The 23-year-old nearly nicked all three points in stoppage time when his shot was deflected over the crossbar in a frenetic finish but in the end neither side could find a winner.

Brisbane Roar thought they had a penalty just after the half-hour mark when referee Stephen Lucas pointed to the spot for a Phoenix handball in the box. Thomas Broich thundered a header into the crossbar in the buildup with the ball rebounding to Andrew Durante who appeared to use arm to divert the ball away under heavy attention from Henrique. Following protests from the Phoenix players the referee sensationally changed his mind after conferring with his lineman drawing the ire of Roar players.

– Brisbane had failed to score in just two of their previous 26 A-League games against the Phoenix leading into this Round 14 clash.

A perfectly weighted ball from Dimitri Petratos in behind the Phoenix defence seemed destined to break the deadlock on the hour mark. Petratos picked out the run of Henrique but Phoenix’s 21-year-old debutant Dylan Fox made a last ditch tackle to clear the danger.

Jeffrey Sarpong showed a glimpse of his potential when he got clear of his marker at the start of the second half. The Dutchman whipped in a perfectly weighted cross to an unmarked Matthew Ridenton at the back post but he headed hopelessly wide of the goal.

Roar skipper Matt McKay appeared to pick up a leg injury in the first-half but he was able to play out the contest.

The Phoenix were missing Roy Krishna, Ben Sigmund, Louis Fenton and Alex Rufer for the clash and will hope at least a couple of them can get back on the park next weekend.

A decimated Wellington outfit will be thrilled to pick up a point against the league leaders and had Brisbane’s measure on their home patch.

Having dropped out of the top six the Phoenix will fancy breaking their five game winless run in Newcastle next weekend.

Brisbane were forced to settle for a point, bringing an end to their four game winning streak but sending them one point clear at the table’s summit.

However coach John Aloisi will feel it’s a case of two points dropped in a match they were expected to win comfortably, with the Roar clearly missing the presence of Jamie Maclaren up front.

The decision by referee Stephen Lucas to overturn the penalty he awarded Brisbane in the first-half will no doubt attract plenty of commentary post match.