Home International By Any Means Necessary 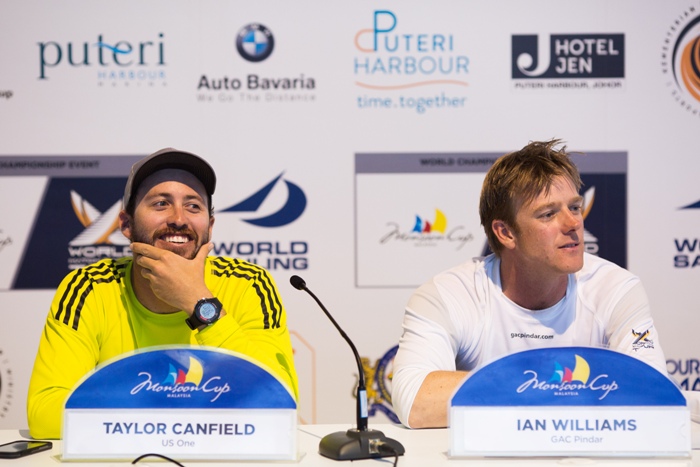 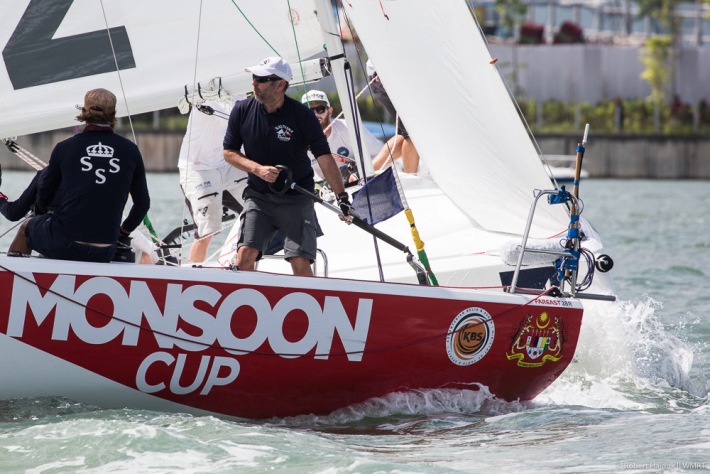 The penultimate day of the Monsoon Cup showed just how far the world’s best professional match racing teams are prepared to go in their quest to win the World Match Racing Tour, both on and off the water. There’s money on the line, and there’s professional pride at stake.

A dramatic day, staged in thunderous, monsoon rain conditions, concluded with the three World Championship contenders – Taylor Canfield (ISV), Ian Williams (GBR) and Bjorn Hansen (SWE) – all making their way through to the final four, where they are joined by Eric Monnin (SUI).

The 2013 World Champion Canfield won Qualifying with an impressive 9-2 scoreline, giving him first pick of his opponent for the Quarter Finals. The US Virgin Islander chose the lowest ranked skipper from Qualifying, Johnie Berntsson.

At the start of their first match, Canfield held a good lead over the Swede but Berntsson found some more breeze by the left-hand shore as US One parked up in a wind hole further towards the middle of the fickle Straits of Johor. Berntsson was making the most of his lucky break until principal race officer Dave Tallis decided the conditions had become too random and abandoned the race.

The evening was closing in fast and Tallis was given no choice but to call off racing with the Quarter Finals not completed. With just a day remaining to conclude the already tight schedule, race director Craig Mitchell then made the even tougher call to terminate the Quarter Finals. Hansen was the only one to have earned his way through to the Semi Finals based on his Quarter Finals result, beating Nicolai Sehested 2-0.

The other three matches were either tied 1-1 or yet to complete a match, in the case of Canfield v Berntsson. So it was their superior finishing positions in Qualifying that gave Canfield, Williams and Monnin the right to progress to the final four. That left four other hopeful teams out on their ear, disappointed, but resigned to the fact that sometimes in match racing, hard decisions have to be made.

So Canfield has chosen Monnin, yet to win a World Championship Tour event, as his opponent, leaving Williams to do battle with Hansen. Usually the audience waits to hear with bated breath who will pick whom for their next match, but Canfield’s choice barely registered a murmur compared with the bomb that he had dropped five minutes earlier.

The US One skipper took the opportunity to announce that next season he will be racing the M32 catamaran with Kiwi professional Chris Main, the same Chris Main who happens to be calling tactics for Williams this week.

You could cut the tension with a knife when Canfield made the announcement. Asked whether the timing of the announcement had been timed to destabilise team morale on board GAC Pindar, he replied: “There couldn’t be a better time, to be honest, rolling into the Semi Finals, that being in Ian’s head all day is hopefully going to be a little bit harder for him.”

Williams tried to put on his best poker face, but clearly the timing of Canfield’s bombshell hurt. Maybe it will just sharpen the five-time World Champion’s resolve even more though. “We’re just focused on our game. Chris is a professional, he’ll do the best he can.” As to Main’s decision to race with Canfield next season in the new era of M32 catamarans, Williams commented: “I’m sure Chris will do a great job. It feels a bit like the end of an era. A lot of us older guys have been racing monohulls on the Tour for a long time now. It’s quite emotional that it’s coming to an end, but it’s been a good run for GAC Pindar, five World Championships, three Monsoon Cups, 13 Tour events, but everything moves on.”

While Williams and Canfield have won the World Championships before, for the other title contender, this would be Hansen’s first world title. So which of these three will win the Monsoon Cup tomorrow? Not that we should discount Monnin either, who has reached the Semi Finals for the second year running. It would be a surprise to see the Swiss go all the way tomorrow, but it’s very possible, especially in the fickle conditions on the Straits of Johor. Hansen didn’t even make it past Qualifying last year, and he has a reputation for preferring the larger boats on the Tour.

But the 47-year-old has quashed that theory with an impressive mastery of the new FarEast 28R keelboats. As the only one of the three title contenders yet to win the World Championships, it would be a very special day for Hansen if he was to win tomorrow. But for sheer dramatic tension, a Williams v Canfield match would be the perfect resolution to a grudge match that has defined the Tour for the past three years. Game on for one of the most dramatic finales in the history of the World Match Racing Tour.

For the latest standings and scores on the Monsoon Cup –http://wmrt.com/component/wmrt/event_results/105.html