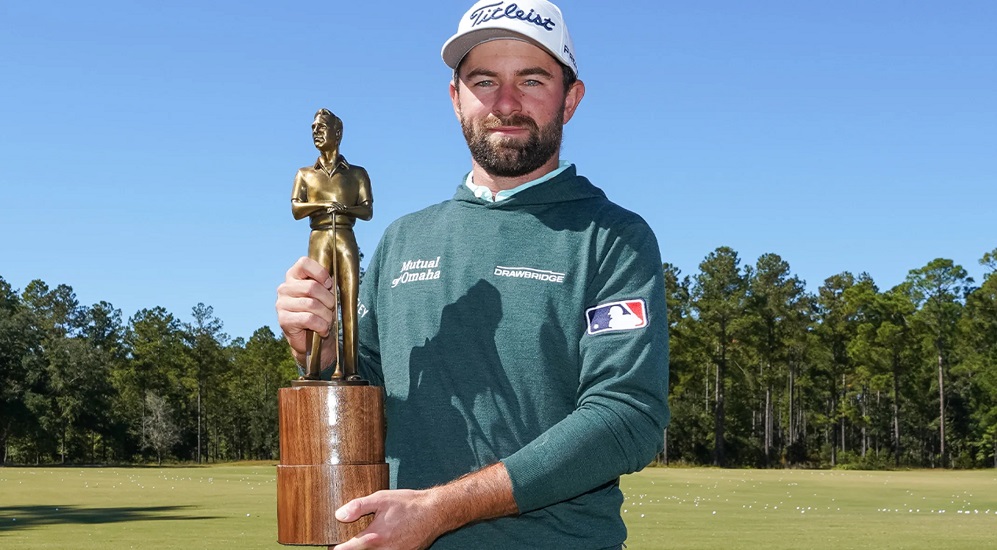 The PGA TOUR announced today that Cameron Young has been named the 2022 PGA TOUR Rookie of the Year as voted by the TOUR’s membership for the 2021-22 season. Young, who made his Presidents Cup debut for the victorious U.S. Team in September, earned five runner-up finishes and ended his rookie season No. 19 in the FedExCup standings.

Young, a 25-year-old native of Scarborough, New York, and a 2021 Korn Ferry Tour graduate, will receive the Arnold Palmer Award for winning Rookie of the Year. He was selected for the honor over Tom Kim and Sahith Theegala, receiving 94 percent of the membership vote.

“Congratulations to Cameron Young on being voted PGA TOUR Rookie of the Year by his peers,” said PGA TOUR Commissioner Jay Monahan.

“Cameron’s career has seen a remarkable rise over the last several years, and he quickly became a favorite among fans last season with the style in which he attacks the golf course. And of course, given Cameron’s Wake Forest ties, receiving the Arnold Palmer Award as PGA TOUR Rookie of the Year will certainly hold a special significance for him.”

Young’s runner-up finishes on the season came at the Sanderson Farms Championship, The Genesis Invitational, Wells Fargo Championship, The Open Championship and Rocket Mortgage Classic. With five second-place results, Young tied the most by any player in a single season over the last 40 years, with Vijay Singh in 2003 the last to accomplish the feat.

Young also recorded a pair of T3s at the RBC Heritage and PGA Championship, falling one stroke out of a playoff in each. The nine players that finished ahead of Young in his seven top-three results are all currently ranked in the top 25 of the Official World Golf Ranking.

Young, a 2019 graduate of Wake Forest University, and 2021 Arnold Palmer Award winner Will Zalatoris are the first pair from the same college to win Rookie of the Year honors in back-to-back seasons (est. 1990).

The two played together for the Demon Deacons for two seasons and both earned All-Atlantic Coast Conference honors in those years (2016-17 and 2017-18). Arnold Palmer, the namesake of the award, won two individual NCAA Championship titles while at Wake Forest (1949, 1950).

At No. 17 in the Official World Golf Ranking as of September 15, Young entered the 2022-23 PGA TOUR Season as the highest-ranked player without a victory in his PGA TOUR career. Scottie Scheffler was in that position at the start of last season and went on to win four times, including the Masters Tournament, and moved to World No. 1 on March 27, holding the top spot through the end of the season.

Each of the last six players named PGA TOUR Rookie of the Year qualified for the 2022 TOUR Championship, with Xander Schauffele, Aaron Wise, Sungjae Im, Scheffler, Zalatoris and Young winning the award in their respective rookie seasons. With the exception of Zalatoris, who was No. 7 in the standings for the U.S. Team but withdrew his name from consideration for a captain’s pick due to a back injury, each of the last four competed in last month’s Presidents Cup.

PGA TOUR members who played at least 15 official FedExCup events during the 2021-22 season were eligible to vote.