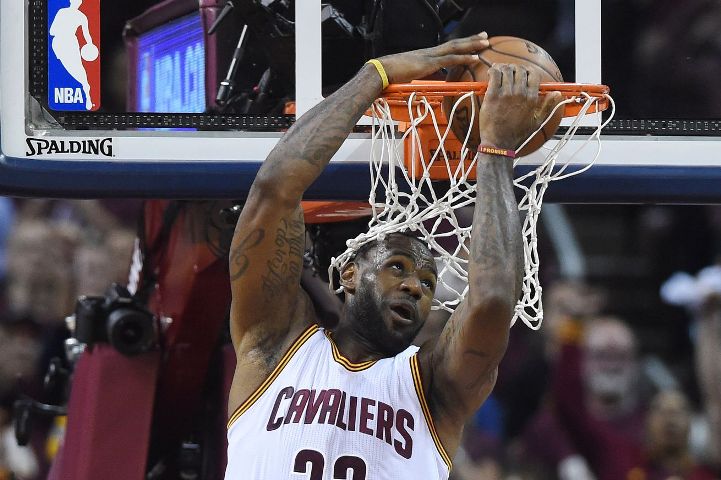 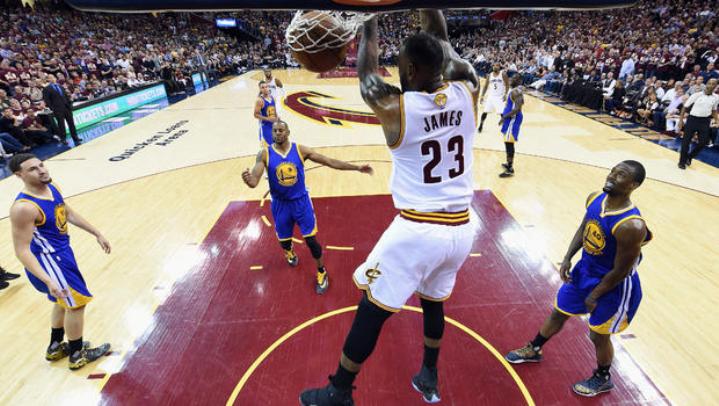 Smothering defensive work and an aggressive scoring attack inspired by LeBron James lifted the Cleveland Cavaliers back into the NBA Finals on Wednesday with a 120-90 rout of defending champion Golden State.

James scored 32 points, grabbed 11 rebounds and added six assists while Kyrie Irving netted 30 points, 16 in the first quarter, and had eight assists after producing only 10 points in a 110-77 loss in game two.

“My teammates got me going. They told me to be aggressive and that’s what I was,” James said. “It was just a collective team win.”

But Irving noted how an emotional James told his teammates in a pre-game huddle to “Follow my lead,” and that motivated the Cavaliers, who scored the first nine points, jumped ahead 19-4 and 33-14 and never trailed in the romp.

“Our leader is looking us all eye to eye and telling us, ‘Let’s go to war,'” Irving said. “Just realizing the magnitude of what’s about to happen, going out there and battling, understanding that we’re being led by a great player.”

Despite the humbling defeat, the Warriors remain ahead 2-1 in the best-of-seven series with game four Friday at Cleveland and game five back in Oakland on Monday.

Only three teams in 69 prior NBA Finals have rallied from 2-0 down to win the title, but no team trailing 3-0 has ever won an NBA playoff series.

“We weren’t ready to play,” Warriors coach Steve Kerr said. “They just punched us right in the mouth right in the beginning. We were turning the ball over like crazy. Soft. We were extremely soft to start the game. Just a horrible way to start.”

“We were very physical defensively and we were aggressive offensively, attacking the basket, getting out in transition, running the floor,” said Cavaliers coach Tyronn Lue. “That’s how we have to play.”

Never before in NBA Finals history had a team won by 30 or more only to lose the next game by 30 or more, but that’s what the Warriors did.

“If you let your guard down and the other team is angry, then you can see this kind of turnaround,” Kerr said.

“This was about one team being emotionally fired up and angry about being down 0-2 and another team being comfortable. It was just the level on intensity they brought. Their aggressiveness was important.”

James was so aggressive that he swatted away a Steph Curry shot after a whistle.

“When you have the greatest shooter in the world trying to get an easy one or trying to get in rhythm, it’s our job to try to keep him out, after the whistle or not,” James said. “That was just my mindset. I didn’t want him to see the ball go in.”

J.R. Smith added 20 points while Tristan Thompson contributed 14 points and 13 rebounds for the Cavaliers, who improved to 8-0 at home in the playoffs and snapped a seven-game losing streak to the Warriors.

NBA Most Valuable Player and scoring champion Curry managed only two points in the first half and finished with 19 while Harrison Barnes added 18 points and Klay Thompson contributed 10. Curry and Thompson shot a combined 10-for-26.

“They played aggressive defense and they came out with a big punch,” Curry said. “For me to do what I need to do to help my team, I have to play 100 times better than that, especially in the first quarter.

“I’ve just got to be aggressive and play better and be more assertive. There’s a sense of urgency knowing how big game four is and I need to be ready.”

Golden State, which won a record 73 games this season, lost the third game of a playoff series for the fifth consecutive time, falling to 3-5 on the road in this year’s playoffs.

The Cavaliers led 51-43 entering the second half despite shooting only 6-of-27 from the floor in the second quarter as the Warriors went only 2-of-14 from 3-point range.

The Cavaliers began the third quarter with a 19-5 run, James scoring eight points to power Cleveland to a 70-48 advantage, and the Cavs pulled away for good. – Agence France-Presse