Home News Cavs down Wizards on another milestone night for James 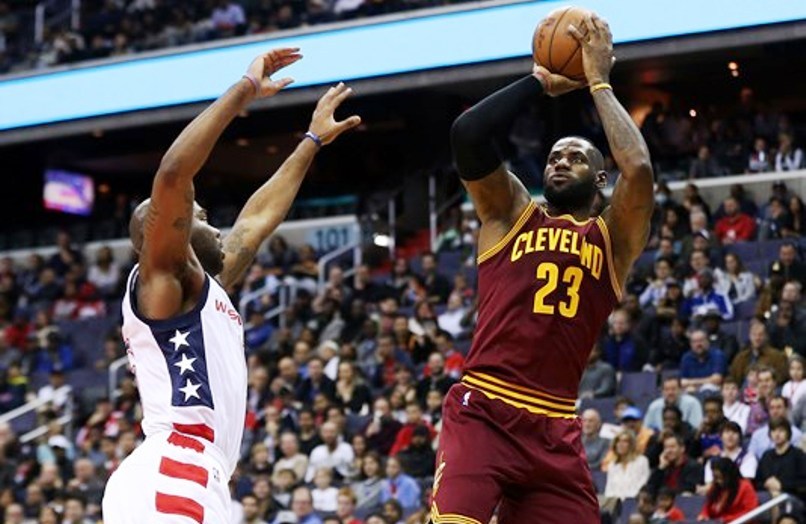 The NBA Champion Cleveland Cavaliers thumped the Washington Wizards 105-94 on Friday on another milestone night for superstar LeBron James.

“It’s an unbelievable feat,” teammate Kyrie Irving said, adding that he was pleased to have a ringside seat.

“It’s truly an honor to be part of the journey like that where you see someone put in so much work every single day and accomplishment after accomplishment and he’s really just humble about it,” said Irving, who led the Cavs with 29 points.

John Wall scored 28 points, but only five in the second half as the Cavaliers built on their 58-56 halftime lead.

The Cavaliers bounced back from their first defeat of the season to improve to 7-1.

That put them alone atop the Eastern Conference after the Toronto Raptors defeated the Charlotte Hornets 113-111 thanks to guard DeMar DeRozan’s late-game heroics.

DeRozan scored 10 of his 34 points in a decisive fourth quarter as the Raptors snapped the Hornets’ four-game winning streak.

Toronto led by as many as 16 points before the Hornets unleashed a 16-0 second-half scoring run.

Point guard Kemba Walker scored a season-high 40 points — with 10 rebounds and six assists — for the Hornets, who led by as many as 10 in the second half before the Raptors roared back.

“We’re an experienced team at this point,” DeRozan said. “We understand how to win, what it takes to win whether you’re down or whether you’re up. We thrive in moments like this.” 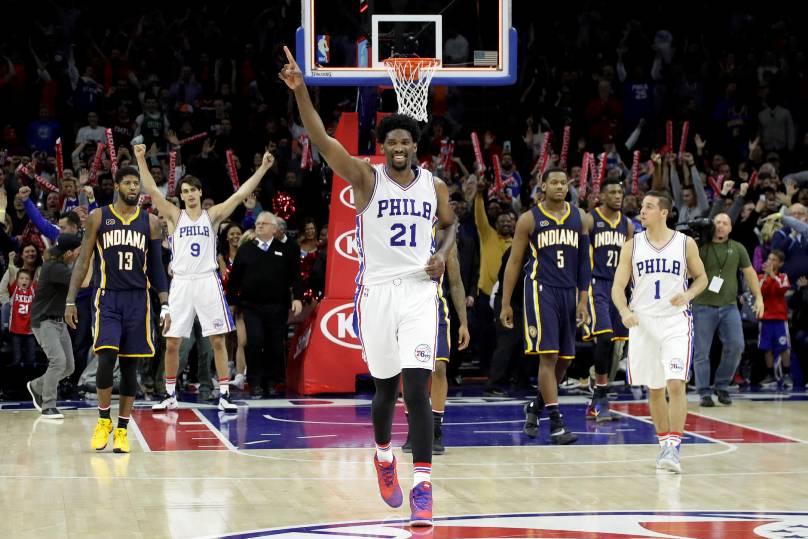 Elsewhere in the East, rookie center Joel Embiid scored a season-high 25 points to help the Philadelphia 76ers notch their first victory of the season, 109-105 in overtime over the Indiana Pacers.

Embiid converted the go-ahead three-point play with 55.1 seconds left in the extra period.

“We all understand there’s a long way to go, but we got our first win and the (locker) room feels great about themselves,” 76ers coach Brett Brown said. “And I’m very happy for them.”

The Portland Trail Blazers also worked overtime for a victory. Damian Lillard scored 36 points and CJ McCollum added 31 for the Blazers, who edged the Sacramento Kings 122-120.

In Oklahoma City, Blake Griffin scored 25 points to help the Los Angeles clippers to a 110-108 victory over the Thunder.

The Clippers, off to the best start in club history, improved to a league-leading 8-1, avenging their only defeat of the season, an 85-83 setback against the Thunder on November 2.

“It was a big-time trust game for us,” point guard Chris Paul said after the Clippers weathered the Thunder’s blazing start. “We just stuck to the game plan.”

The score was knotted at 50-50 at halftime. An 8-1 scoring run early in the third quarter put the Clippers ahead and they took an 82-74 lead into the final period.

But the Thunder wouldn’t go away and Russell Westbrook tied the game at 102-102 with a three-pointer with just over two minutes to play.

The Clippers answered with a dunk by DeAndre Jordan and a three-pointer by Jamal Crawford.

The Thunder battled back, but Westbrook’s three-point attempt in the waning seconds was off target.

“Yeah, yeah,” said Westbrook, who finished with 29 points. “I should’ve probably drove (to the basket), but it’s all right.” – Agence France-Presse