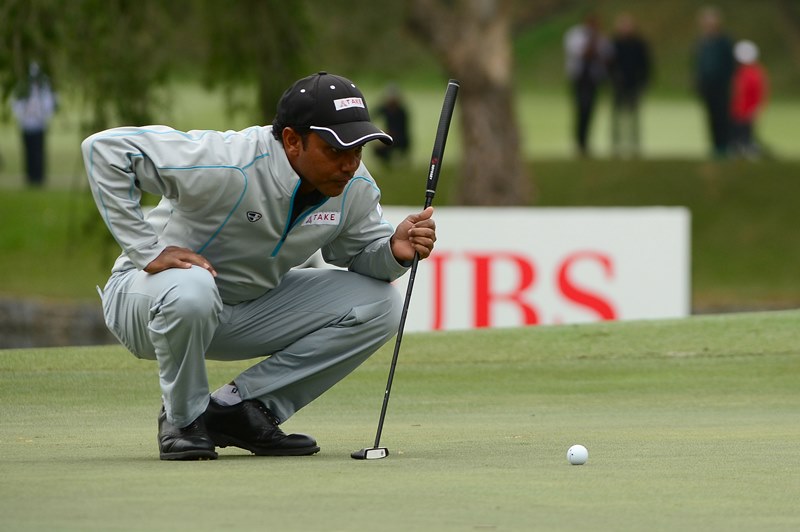 India’s S.S.P Chawrasia will head into the final round of the UBS Hong Kong Open with a slender one-shot advantage after carding a third round one-under-par 69 at the Hong Kong Golf Club on Saturday.

Chawrasia, a six-time Asian Tour winner, is seeking his second win outside India and will be drawing confidence from his recent good form and positive mental approach to his game

The Indian has led from day one of the US$2 million event but is keeping close tabs on his nearest rivals as he goes in search of a wire-to-wire victory at the UBS Hong Kong Open, which is among one of the five events left on the 2017 Asian Tour season.

Spain’s Rafa Cabrera Bello produced the day’s lowest score by mixing his card with six birdies, one eagle and two bogeys for a three-day total of nine-under-par 201 to sit in second place alongside Asian Tour member Wade Ormsby of Australia.

Thailand’s Poom Saksansin, who started the day tied for third, posted a 70 to slip to a share of 13th place that also featured Justin Rose of England while Masters Tournament winner Sergio Garcia was a further shot back in equal 19th place after he signed for a 66.

I missed a couple putts but still managed to finish one-under. So, I’m happy. There’s still one more round to go and I’m looking forward to it. To be honest, I thought someone would be able to catch me from behind simply because of my putting. There’s a little bit of pressure, but I can manage that. This course really suit for me, but somehow I’ve not been playing well here.  But finally this year, I’m leading.  So, quite happy. I think if I’m feeling nervous, the other players will also be nervous.  But I’m okay.  I’ve played under these kind of pressure before so I’m all right.

First day, I also played good. I just didn’t really get it going on the greens and I did get it going on the greens today.  I managed to hole some good putts. Hopefully this will give me a chance for tomorrow. I think I’m going to be within reach, so I do believe that I can win it for sure. The wind has made it much tougher.  Especially the first two days, it was very breezy.  Today I think the wind has dropped down a little bit, stayed a bit more consistent.  But the first and second round, they were very tough, very gusty and all over the place.

It’s nice to have a strong day out there.  Made a few putts early to keep it going and played pretty solid through the middle there.  Didn’t quite hit it close enough at the end but all in all a good day. Sometimes after four weeks, you can be a bit rusty.  Had a bit of practise yesterday afternoon and got the ball striking more where I wanted it.  Hit some better shots today.  Yeah, I guess it resulted in a good score. I’ll just try and go and play my own game.  This place is always more or less the same, same kind of score wins.  Just got to keep yourself in the game and give yourself a chance.  I won’t be changing what I’m doing.

I just make a lot of mistakes with my iron shot.  I’ve been hitting it good but sometimes I made bad decisions and sometimes it’s bad luck. If I want to play aggressive, it means I have to hole the putt and hit irons a lot better.  I’m five shots back and I think it’s a little bit too far off, but if I play welltomorrow, who knows?

It should have been probably an easy 63.  But you know, it’s what it is.  I just haven’t felt comfortable all week for some reason, and still kind of dragging a little bit.  But you know, we’re trying, I guess. I made some nice putts.  Unfortunately I just missed a whole bunch coming in, good birdie opportunities.  Hopefully I can do a little bit more of that tomorrow, play, hit some good shots and hopefully feel a little better with the putter and see if we can post a really good round.

Leading scores after round 3 of the UBS Hong Kong Open Championship 2017 being played at the par 70, 6710 Yards Hong Kong GC course (am – denotes amateur):