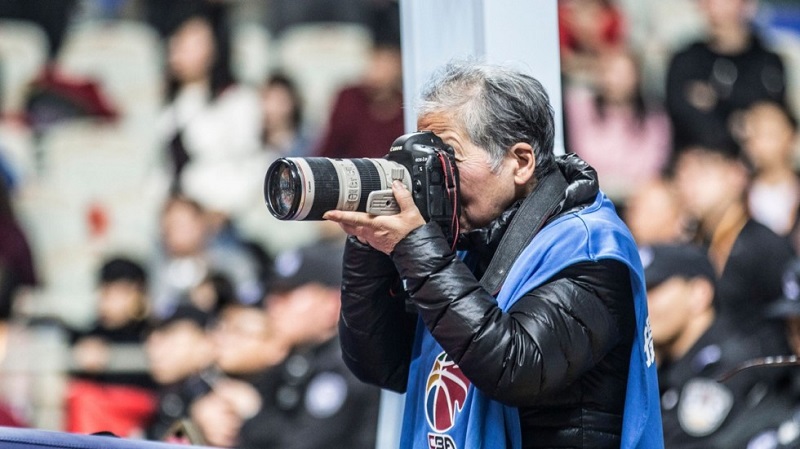 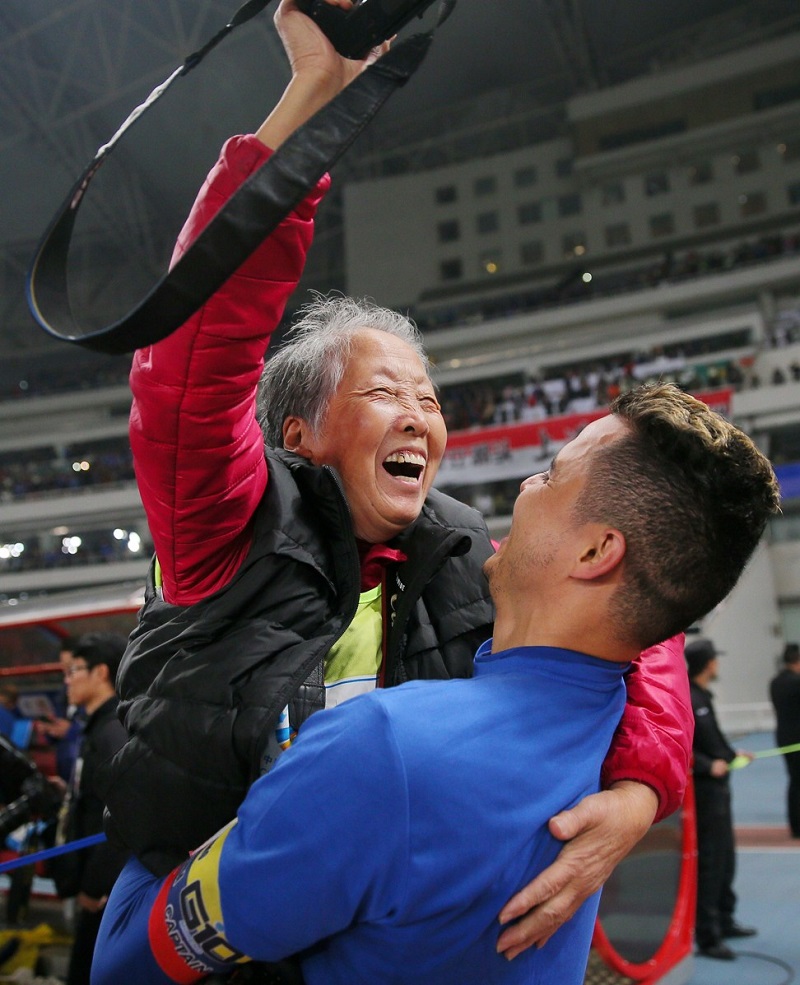 Hong Nanli stands just 153 centimetres (five feet) tall and at 79 years-old this indefatigable grandmother is almost certainly the oldest working sports photographer in China, if not beyond.

It makes her a minor celebrity in a profession that is overwhelmingly male and macho and in which many of her peers are less than half her age.

But it is not just her fellow journalists who snap selfies with her at sports matches and press conferences: players and coaches also often seek her out because she cuts such an incongruous figure.

When Shanghai Shenhua beat rivals Shanghai SIPG over two legs to win the Chinese FA Cup in November, captain and Colombian international Giovanni Moreno plucked Hong from the sidelines and lifted her high into the air in celebration.

And when NBA legend Shaquille O’Neal was in the city he took a selfie with Hong and posted it on Weibo, China’s equivalent of Twitter, writing: “This lady is a legend in Shanghai.”

Hong, who outside work leads an exercise class three times a week, is still working as a freelance photographer more or less full-time — extremely rare in a country where women usually retire before 55.

“I once made a promise that I will work until I am 80,” said Hong, with that milestone creeping up in July.

“I’m still wondering what my next plan is. I think, for me, it is impossible to completely give up working.

“But I sure don’t have the energy now to take photos like I did before,” added Hong, fondly referred to by fellow photographers as “Teacher Hong” — “teacher” being a common term of endearment and respect in China.

Sports photography can be a physically demanding job, lugging around heavy equipment and jostling with fellow snappers — often male and always younger and stronger — for a prime spot.

Hong was knocked to the ground after the FA Cup final second leg in the rush to snap pictures of the jubilant Shenhua coach Wu Jingui.

But she was quickly hauled back to her feet and her fellow photographers tend to look after her, occasionally ushering her into a better position in the press pack because she is smaller than the rest.

Her camera, which threatens to almost overwhelm her at times, is empowering.

“Once you are at a sports event, you forget who you are, I feel I am like these youngsters and I am young,” she said.

Hong’s diminutive but sturdy frame is a nod to her early career as a gymnast and in 1959 she became a coach of a Shanghai’s women’s gymnastics team. She would later become an international gymnastics judge.

In 1979 she turned to photography and was employed by the publicity department of the Shanghai sports authorities, later going freelance for media in the city.

She describes how she saw a young basketball player by the name of Yao Ming coming through the ranks as a gangly teenager in the 1990s and immediately knew that he had the talent, intelligence and heart to be a global star.

Hong, who has two adult grandchildren, was there again when Yao announced his retirement in July 2011.

Describing it as one of her favourite moments of a long career, she took to the stage to present Yao a photograph she took of him before he became an NBA standout with the Houston Rockets.

Hong, whose freelance work now mostly features in an airline in-flight magazine, treasures her role in documenting the history of sport in her home city.

“I think I am doing something valuable,” said Hong, easily switching from her smartphone to a laptop as she scrolls through a selection of the thousands of pictures she has taken down the decades.

“2018 is the 40th year of my taking photos and also the 40th anniversary of China’s reforming and opening up,” she added, saying that she plans in the coming months to put on a photo exhibition showcasing her work and later publish a book.

“A photographer like me: (nearly) 80, female, still working in the front line, there should be only me,” she said, asked if she knew of any others in China still doing what she does.

“Some friends joked that I could even apply for the Guinness World Records.”  Agence France-Presse