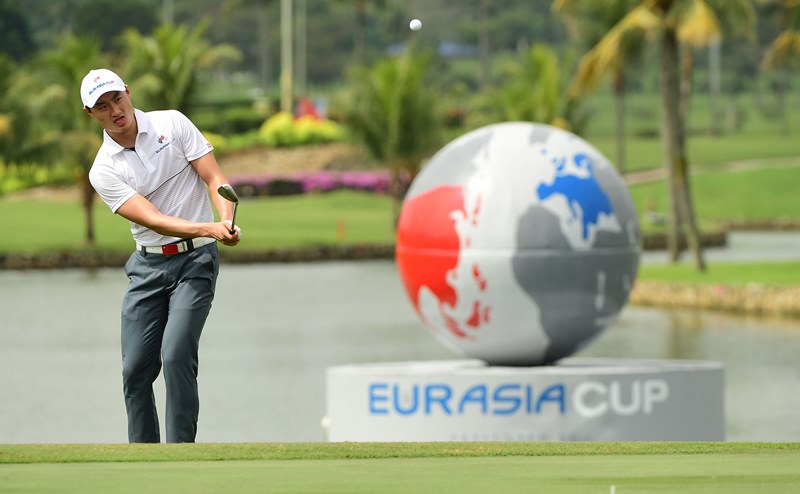 China’s rising star Li Haotong believes the stage is set for him to take on Team Europe when the EurAsia Cup presented by DRB-HICOM gets underway on Friday.

The world number 59 announced his arrival on the world stage with a scintillating final round 63 which saw him finish third at The Open last year.

The Chinese, who endeared himself to the local fans by winning his National Open in 2016, is eager to further prove his worth when he tees up for his first team match play event at the Glenmarie Golf and Country Club.

Zhang, a six-time Asian Tour winner and legend in his own right, has been impressed by the young Chinese and believes he can continue to make his mark.

China’s elder statesman also believes that despite the diverse culture and background Team Asia has, they are united in their common goal of bringing glory to the continent when the event starts.

We have a big chance. If we all play to our strengths, we can beat them. Why not? The greens are firm here and you have to play smart golf. We need to keep the ball on the fairway and the team definitely has the right players to do that. We have a good chance of keeping the scores low. I’m definitely very excited to be playing in my first EurAsia Cup and I’m already beginning to enjoy my time here especially with the camaraderie in the team room.

I’m here as vice-captain for Team Asia, and I’m very impressed with the line-up.  We have some good firepower, which is obviously strengthened by some of our more experienced players like Kiradech (Aphibarnrat) and Anirban (Lahiri), who have certainly impressed on the world stage. There’s also a very good mix of players with the younger ones like Haotong who is definitely shown he can win on the world stage.  I’m very confident of Team Asia doing well this week. Asia is so diverse, obviously coming from different backgrounds and cultures. But we have one common goal which is to gel together as a team and put the points on the board for Team Asia.