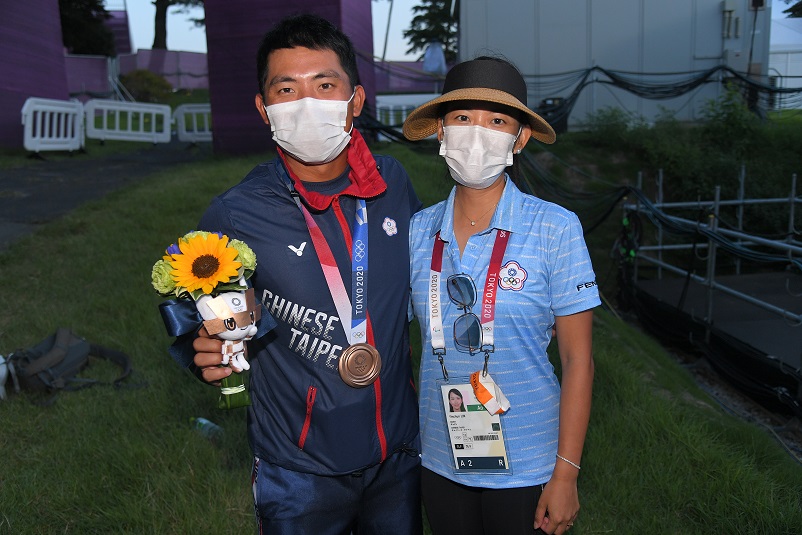 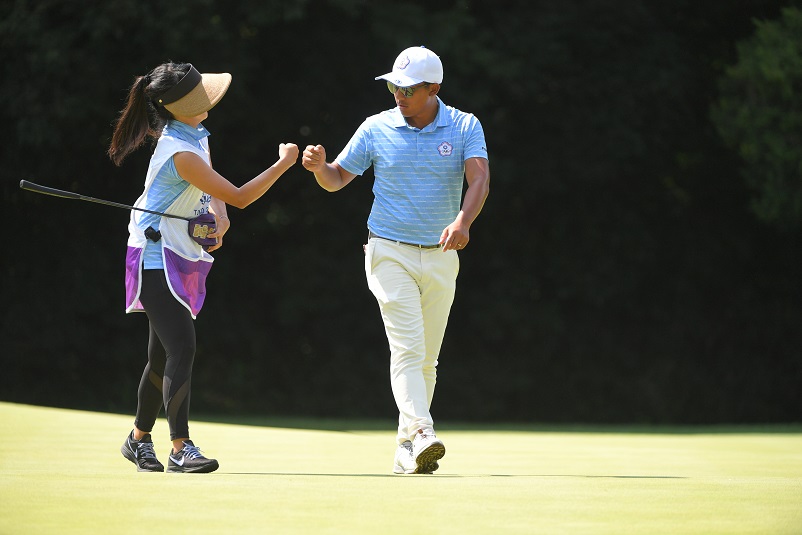 C.T. Pan enjoyed a slice of Olympic history by winning Chinese Taipei’s first ever bronze medal in the Olympic Games Tokyo 2020 men’s golf competition on Sunday and it was extra special with wife, Michelle by his side.

After four extra holes, Pan, who had Michelle on caddying duties this week, prevailed over two-time major champion Morikawa with a par on the 18th hole. American Xander Schauffele won the gold medal and Slovakia’s Rory Sabbatini claimed the silver after shooting an Olympic record of 10-under 61 in the final round.

“It came as a surprise. After day one, plus 3, 74, I remember I texted one of my good friends and I was like, the struggle is real. So it’s quite a turnaround for this week winning the bronze medal that I couldn’t even think about it, didn’t even think about it after Thursday’s round. So overall that was a very happy ending.”

In what is his second Olympics appearance – Pan finished T30 in Rio 2016 – he followed up his dismal 74 on Thursday with a pair of 66s and credited his wife for keeping him on an even keel when the chips were down. Playing the final round alongside Sabbatini who was in flying form on Sunday, Pan was equally brilliant by firing six birdies and one eagle for a 63 to charge into medal contention.

From seven players, the playoff was subsequently reduced to a two-horse race after both Pan and Morikawa made birdies on the third extra hole on the 11th hole, and the Chinese Taipei star secured the podium finish with a par as Morikawa made bogey after finding trouble by the greenside bunker at the next hole.

“I mean I’ve never been in a playoff with that many people, seven people for one spot, which is pretty crazy. And if you look at the field in the playoff, we got Rory McIlroy, Collin, we got I don’t know two, three top-10 guys in the world. And we got me, 200th ranked, shooting plus 3 on day one, didn’t know what to do on Thursday,” said Pan.

“I just told myself, just keep my head down, hit it one shot at a time and then I just reminded myself to keep joking with my wife, she’s great, she’s great caddie, but she definitely keeps the mood very light for me and it helps me to focus more. So I want to thank her for that. And the playoff, it’s crazy.”

Michelle was equally ecstatic and she stood proudly by the greenside to watch the medal presentation ceremony and the Chinese Taipei flag being hoisted alongside the U.S. and Slovakian flags. “This feeling is so unreal to me,” she said with tears of joy in her eyes. “After the first round, we were tied 57th and it was crazy. This morning when I woke up, I saw CT packing his uniform quietly and I just said okay, we still have a chance and let’s shoot 8 or 9 under to win a medal and we did it.

She was grateful Pan pushed for her to be his caddie, which meant spend time with the Chinese Taipei contingent in the Games Village. It also made up for her not being able to witness his Asian Games exploits in 2014 and also his first PGA TOUR triumph in 2019.

“He won the gold medal at the Asian Games but I wasn’t there. When he won RBC Heritage, I wasn’t there too. So I’m glad I’m here and I’m all the way with him from the first tee shot till the last putt. I really appreciate C.T. working so hard to give me this chance to participate in this Olympics. It’s an honour. We’re happy to contribute one medal,” said Michelle.