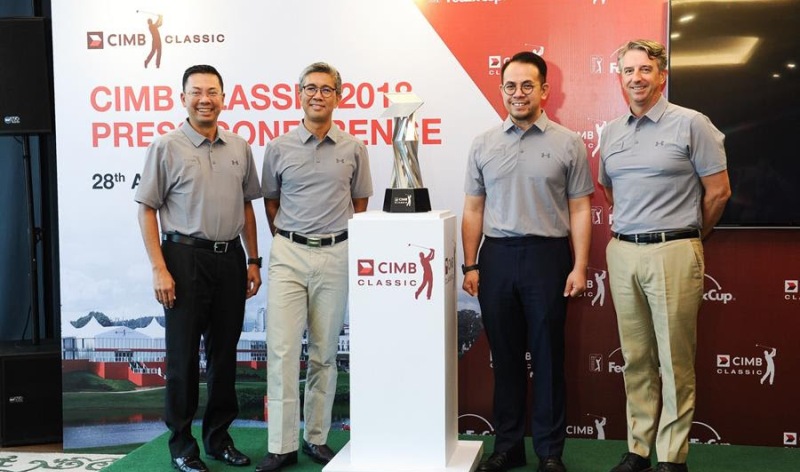 The CIMB Classic will celebrate its ninth edition from 11 to 14 October 2018, with the sole PGA TOUR-sanctioned tournament in Southeast Asia primed to serve another exciting week of world-class golf in Kuala Lumpur, Malaysia.

Title holder Pat Perez of the United States has confirmed his return to Malaysia to defend the CIMB Classic after a dominant four-shot victory over compatriot Keegan Bradley in 2017.

With a US$7 million prize fund, which is not only amongst the top-three richest tournaments in Asia Pacific, but also Malaysia’s biggest annual sporting showpiece, CIMB Classic will feature 78 players including the top-10 available money leaders from the Asian Tour’s Habitat for Humanity Standings and eight sponsor exemptions which include two Malaysians.

At the launch, Tengku Dato’ Sri Zafrul Aziz, Group CEO, CIMB Group said, “Since the launch of the CIMB Classic eight years ago, we are proud and feel privileged that our flagship sporting showcase has helped profile Malaysia to a truly global audience of over one billion homes and 226 countries via live broadcast annually. The tournament has placed the country as a prime stage for world-class sports given Malaysia’s central location for golf fans in ASEAN and beyond to visit and experience world-class golf action at their doorstep. The CIMB Classic has also grown the game in Malaysia by inspiring and providing opportunities for Malaysian professional golfers to achieve their best.”

Two Malaysian golfers will once again have the opportunity to compete against global stars from the PGA TOUR during the CIMB Classic. One slot has been allocated to the winner of the CIMB National Championship which is scheduled for 25 to 28 September at TPC Kuala Lumpur. Subsequently, the highest ranked Malaysian on the Official World Golf Ranking as of 1 October 2018 will also earn the right to play in the CIMB Classic which was inaugurated in 2010.

It has also proven to be a successful launchpad for many of the game’s newest stars. Justin Thomas won his first PGA TOUR tournament at the 2015 CIMB Classic before returning to successfully defend his title in 2016. He has since gone on to win a total of nine PGA TOUR tournaments, including a major victory, and reached the world number one ranking in May. Other young stars who have used the CIMB Classic to launch their careers on the PGA TOUR include Japan’s number one Hideki Matsuyama and India’s Anirban Lahiri.

Todd Rhinehart, Vice President and Executive Director, PGA TOUR, said: “As a leading ASEAN universal bank, CIMB has proven to be a terrific partner for the PGA TOUR. Our players always enjoy coming to Malaysia and we look forward to another memorable CIMB Classic.

“We are pleased to announce Pat Perez will return to defend his title and we will unveil other leading names over the coming weeks. Our tournament here has been headlined by proven champions and rising stars over the years and I’m convinced golf fans in Malaysia will have another wonderful experience when they visit TPC Kuala Lumpur in October. Apart from world-class golf, we will offer engaging activities for everyone in the family to enjoy themselves beyond the golf action.”

Tickets for the CIMB Classic will go on sale beginning 3 September, 2018.  For more details on ticketing prices, please visit www.cimbclassic.com