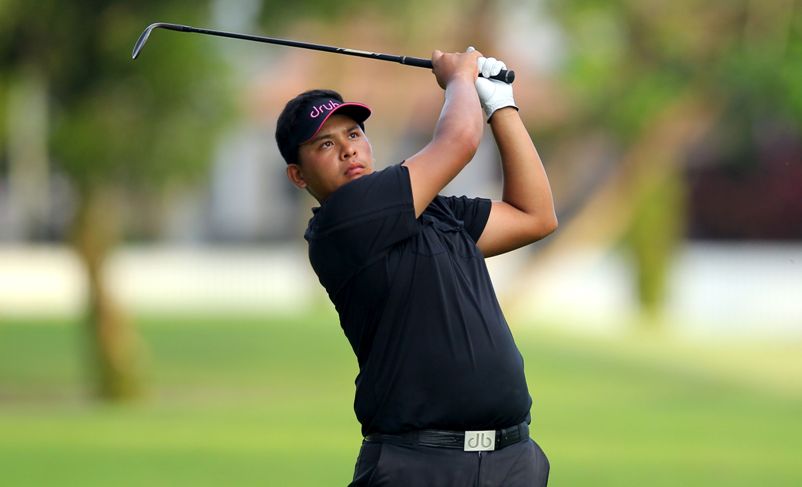 Talented Thai Chanachok Dejpiratanamongkol continued his charge towards his maiden Asian Development Tour (ADT) win after signing for a third round nine-under-par 61, highlighted by eight consecutive birdies, at the inaugural Singha Phuket Open on Saturday.

The 23-year-old Thai, who held a share of the opening round lead, returned early in the morning to complete 12 holes from his second round, where he signed for a flawless 63 to gain a three-shot advantage heading into the penultimate round at the Laguna Golf Phuket.

He came to life on the par-four sixth hole, locking in a blitz of eight straight birdies before settling with a bogey-birdie-birdie finish to extend his lead to four shots on 24-under-par 186 total in the two million baht (approximately US$58,140) ADT event.

Newly-crowned Asian Tour champion Rattanon Wannasrichan, who started the round with a five-shot deficit, moved into second place after nailing 10 birdies en route to a stunning 60, marking the lowest round so far this week.

Australian Martin Dive, placed second on the current Order of Merit, returned with a 64 to trail by nine shots in third place alongside Thai trio Gunn Charoenkul (62), Chirat Jirasuwan (65) and Pattaraphol Khanthacha (67) on 195 in what is the ADT’s first stop in Thailand this season.

Asian Tour Qualifying School graduate Chanachok, who defeated 2014 ADT Merit champion Pavit Tangkamolprasert for his first professional title on the local circuit two months ago, took advantage of his impeccable short game to put himself in prime position for a maiden title on the ADT.

“I played 30 holes today! I had a superb round. It’s been a great run so far. After sinking eight birdies in a row, I was thinking about shooting 59 or even 58 today. I had shot a 58 once in a social round but never in a tournament.

“The conditions were really good out there, thanks to the rain earlier. I think this course suits my game a lot. I was able to make a lot of birdies out there and I had three chip-ins already this week. I think I was a bit lucky too. I will stick to the same game plan tomorrow.

Chanachok dropped his second shot of the week after a misread on the 16th green. He recovered brilliantly with two closing birdies, including a chip-in from 20 yards off the green on the last.

“I hit an errant drive on the 18. I thought the ball landed on the cart path but it actually hit the tree and bounced back onto the fairway. I hit a two-iron to about 20 yards from there, missing the green on the right but I managed to chip it in for birdie. It was a superb finish,” Chanachok added.

His eight birdies in a row and 54-hole score would have set new records on the ADT if not for the preferred lies ruling in place.

Rattanon, who claimed his Asian Tour breakthrough on home soil last week, was delighted to put himself in position for back-to-back wins.

“I found magic in my putter again today, just like it was when I won the Thailand Open last week. I managed to hit 12 fairways today as well. I hit the ball solid. I am feeling confident with my game right now.

“I hope to ride on that confidence to clinch a back-to-back victory on home soil tomorrow. I will stick to the same game plan and keep fighting for the win. I had a chip-in birdie on 17 from 30 yards which is the highlight for me,” said the 21-year-old Rattanon, a one-time ADT winner.

The winner of the inaugural Singha Phuket Open will take home a prize purse of US$8,697 and receive six Official World Golf Ranking (OWGR) points. The top six and ties will also receive OWGR points based on a sliding scale.