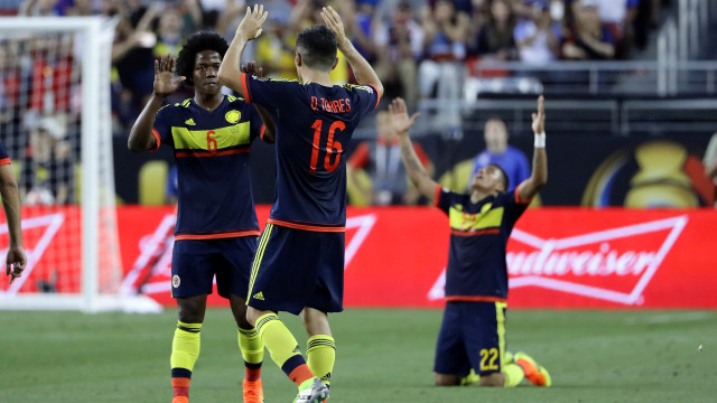 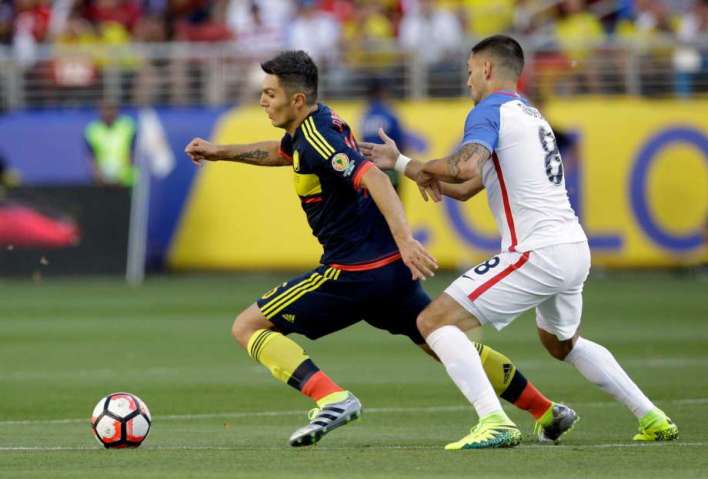 Colombia wrecked the United States’ hopes of a winning start to the Copa America Centenario as goals from James Rodriguez and Cristian Zapata gave the South Americans a comfortable 2-0 victory here Friday.

AC Milan’s Zapata and Real Madrid star Rodriguez struck in the first half before a sell-out 67,439 crowd at the Levi’s Stadium in northern California to puncture American hopes of emerging from a difficult Group A.

US coach Jurgen Klinsmann’s side had hoped to score an upset victory to emulate the Americans’ famous defeat of Colombia at the 1994 World Cup in the United States.

Klinsmann sought to put a positive spin on the game, insisting his team had competed as equals.

“For our players it’s really important that they can see we can beat them,” Klinsmann said.

“The end result is 2-0. But the players will take a lot out of this game.”

Klinsmann admitted the defeat left his team with little margin for error in their remaining group games against Costa Rica and Paraguay.

“Obviously we have even more hunger in our second game now,” Klinsmann said.

“We have our backs against the wall and we need three points against Costa Rica. But there’s a lot of positives.”

A disastrous first half for the host nation saw Colombia take a vice-like grip on the contest.

The Colombians took the lead after only eight minutes, when poor marking at a set-piece gifted a chance to the Italy-based Zapata.

Stoke City defender Geoff Cameron was caught ball-watching as Edwin Cardona’s corner was curled in, and Zapata stole in front of his man to thunder home the finish.

The USA struggled to build any sort of momentum after that, with Colombia flooding midfield and pressing the Americans relentlessly.

Colombia dominated territory and possession and carved out the better chances with Sebastian Perez forcing a diving save from Aston Villa’s Brad Guzan in the 16th minute with a rasping drive.

Monterrey’s Cardona proved to be a menace to the USA back four throughout, tormenting Cameron and DeAndre Yedlin in quick succession midway through the half before shooting on goal.

The only USA chance of note was a 36th-minute run and shot from Clint Dempsey, whose curling effort whistled just past Arsenal goalkeeper David Ospina’s upright.

But within minutes of that fleeting US opportunity, the hosts were dealt a killer blow when Yedlin was adjudged to have flicked a hand out to block Farid Diaz’s cross.

America’s players protested but Mexican referee Roberto Garcia was in no doubt and pointed to the spot. Rodriguez duly stepped up to stroke home the spot-kick and Colombia were in total control.

Colombia threatened again early in the first half, with Cardona testing Guzan once more with a fierce shot on 50 minutes.

It started to look ominous for the hosts soon after, with Colombia passing the ball between themselves to draw cheers of “Ole” from their large contingent of noisy fans.

But home hopes were raised when Dempsey saw his header from a Michael Bradley corner cleared off the line by Perez.

Yet the American fightback was shortlived and it was Colombia who came closest to scoring next when AC Milan’s Carlos Bacca broke clear and crashed a shot against the underside of the crossbar with Guzan beaten.

The introduction of rising teenage star Christian Pulisic and Darlington Nagbe was unable to turn the tide for Klinsmann’s men as Colombia coasted home to victory.

The United States must now regroup in time for their second match against World Cup quarter-finalists Costa Rica on Tuesday. Colombia will play Paraguay in their next match. – Agence France-Presse