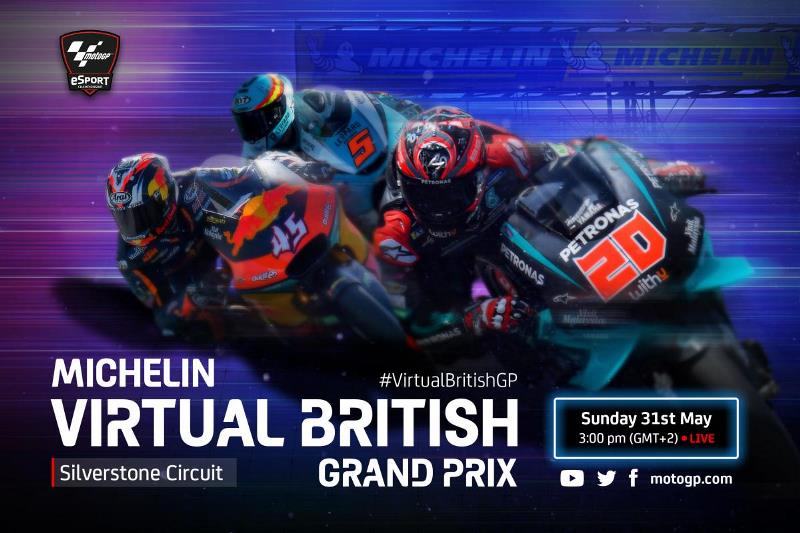 The second Virtual Grand Prix is on its way as MotoGP™, Moto2™ and Moto3™ head to Silverstone

Once again, an incredible amount of content was produced around the event, creating tens of millions of impressions and interactions – with fans consuming nearly four million minutes of video related to Virtual Race 4. Now it’s time for another Virtual GP as the MotoGP™, Moto2™ and Moto3™ classes gear up to take on the mighty Silverstone Circuit in the Michelin® Virtual British Grand Prix, with the event set for Sunday the 31st of May at 15:00 (GMT +2).

The riders will again be playing on the new official MotoGP™20 Videogame from videogame developer, publisher and longstanding partner Milestone – which is available to buy now – as they race around one of the most challenging tracks of the season. Eight MotoGP™ riders form the premier class grid, including the likes of super-fast Fabio Quartararo (Petronas Yamaha SRT) and former virtual winner Francesco Bagnaia (Pramac Racing), but they’ll have a big new name to contend with this time around: Jorge Lorenzo! The five-time World Champion ‘wildcards’ with Monster Energy Yamaha MotoGP, and it’s a venue he’s reigned more than a few times in his career…

The MotoGP™ race is up first, followed by Moto2™, before the show finishes up with Moto3™. The premier class will be competing over 10 laps (50% of race distance), with the intermediate and lightweight classes taking on six laps each – 35% of their respective race distances. As ever, highlights from qualifying will be shown before the races, with those sessions set to decide the grid before the broadcast.