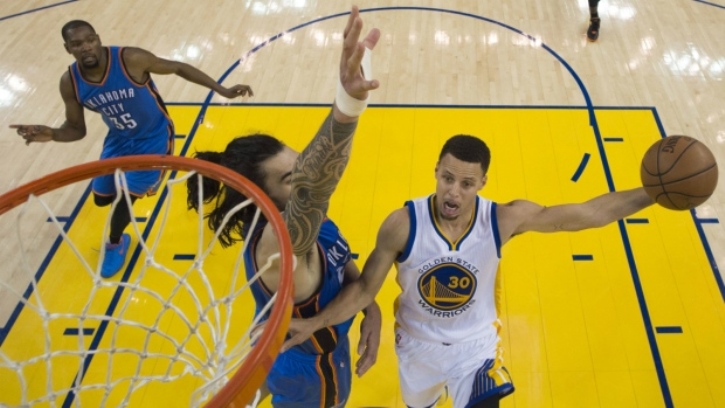 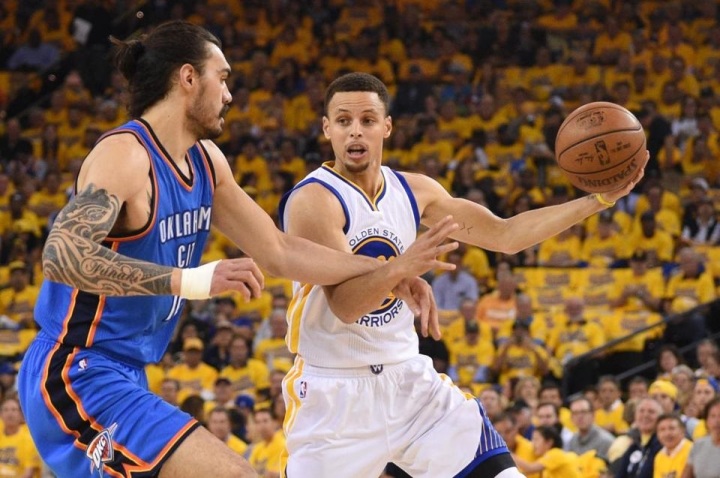 Steph Curry scored 28 points as the Golden State Warriors roared back to life in their Western Conference finals series against the Oklahoma City Thunder with an emphatic 118-91 victory on Wednesday.

Curry seized control of the contest with a spellbinding third-quarter points blitz as the Warriors squared the series at 1-1 heading into Sunday’s game three in Oklahoma City.

“Our ball movement was a lot better tonight. We got it going side to side and set screens and found easier shots and thankfully they went down,” a relieved Curry said. “That’s the way we’ve got to play going forward.”

Curry meanwhile played down what looked like a swelling on his right elbow which appeared after he tumbled into the stands.

“We’ll get freshened up and get ready for another dogfight on Sunday,” Curry said.

“That’s what this series is going to be about — who wants to be more physical.”

“He’s the MVP for a reason and he knows he didn’t have his best night in Game One. He came out and played exceptionally well,” Kerr said. “Business as usual. This is what he does.”

“They were playing well and they had some momentum; I just know we made some stops and Steph got loose,” Kerr said.

“That’s what Steph does, when he can find some space and make a few threes in front of the home crowd it’s a huge boost.”

Kerr meanwhile said he would have no difficulty motivating his team for the challenge of facing Oklahoma City on the road.

“We knew we needed to win tonight badly and we responded well,” Kerr said. “Now we’ve got to go there and play well and it’s a tough place to play. I don’t think we’ll have any problem getting ‘appropriate fear’ from our guys.”

“I thought we were in good shape and then they hit us with that flurry,” Donovan said.

“Obviously we let Curry get loose a few times and we need to do a better job in that area. They played very well.”

Oklahoma City had stunned the reigning NBA champions and their fans at the Oracle Arena in game one on Monday, overturning a 60-47 halftime deficit to run out deserved winners.

A similarly nail-biting encounter looked likely in the early exchanges in game two, with the Thunder always managing to stay in touch despite an error-strewn first half characterized by several turnovers.

Yet the Warriors took control in the third quarter with Curry’s devastating scoring burst propelling them to a double-digit lead.

That was swiftly followed by two swaggering three-pointers and an outside jumper from Curry and suddenly Golden State were up 79-59.

Curry eventually was responsible for all 15 points of a 15-2 Golden State run in the third quarter and this time there was to be no fightback from the Thunder.

The Warriors had soon stretched their lead to 20 points, a margin they held as they headed into the fourth quarter, ahead 88-68.

An Andre Iguodala three-pointer early in the fourth followed by an emphatic dunk put Golden State 25 points clear at 93-68, as the Thunder reeled in the face of relentless pressure.

For Oklahoma City, Durant scored a game-high 29 points with one assist and six rebounds while the talismanic Russell Westbrook finished with 16 points and 12 points.

Yet in contrast to Monday’s all-around Thunder performance, Westbrook and Durant were the only two Oklahoma City players to score in double figures, highlighting the problems the visitors had penetrating a determined Warriors defensive display. – Agence France-Presse