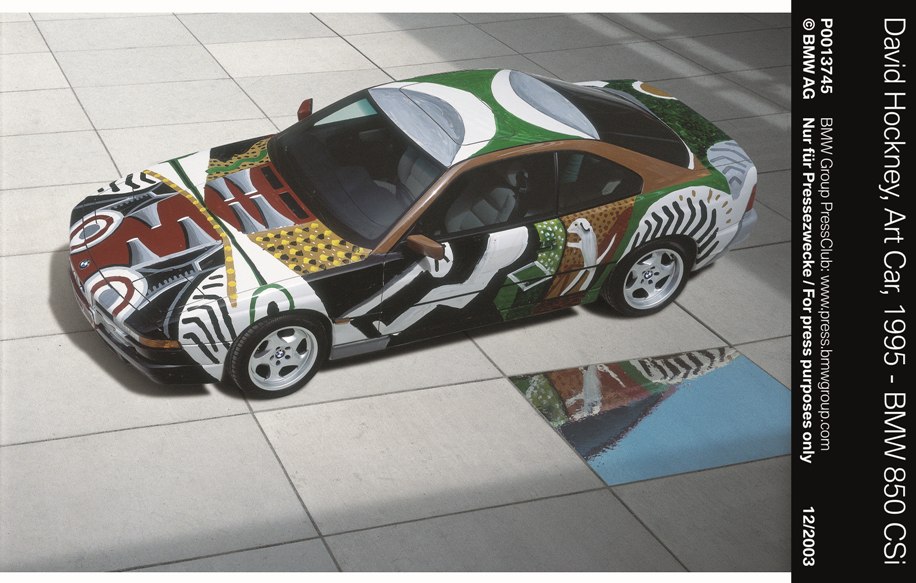 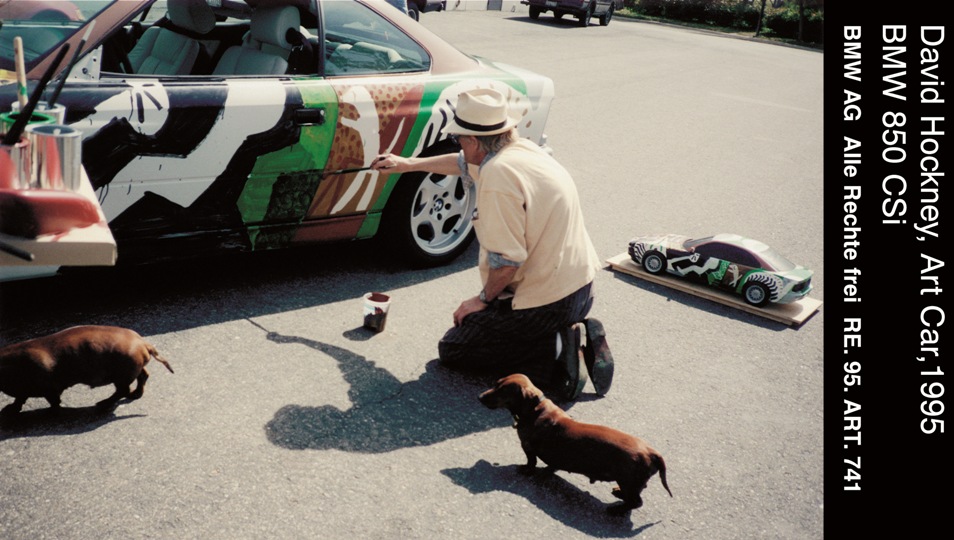 For Paris Photo’s second edition at the Paramount Pictures Studios in Los Angeles, BMW is proud to present the 850CSi Art Car by David Hockney. Almost 20 years after its creation in 1995 the Art Car returns to its roots in LA, the city that has been Hockney’s home town for more than 40 years.

“It would be good to perhaps show the car so you could be looking inside it”, Hockney described his approach to the project. He put the idea into practice in his very own style of pop art that became as popular as Andy Warhol’s.

BMW Group is the official partner of Paris Photo Los Angeles and the night before the start of the fair will celebrate the US-launch of its BMW Art Car book. The first publication regarding the BMW Art Car Collection will be presented on April 24. The book published by Hatje Cantz is a richly illustrated catalogue of the legendary BMW Art Cars’ history.

Since 1975, reowned artists from throughout the world have designed BMW automobiles of their times, all making different artistic statements. The seventeen exhibits created for the Art Car Collection until now include works by exceptional artists such as Frank Stella, Roy Lichtenstein, Robert Rauschenberg, Jenny Holzer, Olafur Eliasson and Jeff Koons, who has also illustrated the cover of the book. The Art Cars reflect the cultural and historical development of art, design, and technology and have been presented by major museums around the world, including the Guggenheim and the Louvre. On 200 pages with 148 pictures portraits and interviews show the motives and the approaches of the artists as well as the historical development of the collection in a descriptive way.

In its 11th year of partnership with Paris Photo, BMW once again provides the VIP shuttle service. Besides the David Hockney Art Car, BMW will display its i8, introducing a new era of sustainable performance. With its futuristic design and groundbreaking technology, the i8 is the world’s most forward looking sports car made out of carbon fiber and BMW’s first high-performance plug-in hybrid.

For over a decade now, BMW has been an active partner of the most established international art fairs including Frieze NY and London, as well as Art Basel in Hong Kong, Miami and Basel, the Berlin Gallery Weekend and TEFAF Maastricht.

Paris Photo Los Angeles, the second US edition of the world’s most celebrated art fair for works created in the photographic medium, will take place at Paramount Pictures Studios offering the ideal setting to explore how artists have been and are using photography and moving image in their work in the 20th and 21st centuries.
The fair will be held April 25-26, 2014 from 12:00 to 7:00 pm and April 27 from 12:00 to 6:00 pm. For more information, please visit http://losangeles.parisphoto.com

For more than 40 years now, the BMW Group has initiated and engaged in over 100 cultural cooperations worldwide. The company places the main focus of its long-term commitment on modern and contemporary art, jazz and classical music as well as architecture and design. In 1972, three large-scale paintings were created by the artist Gerhard Richter specifically for the foyer of the BMW Group’s Munich headquarters. Since then, artists such as Andy Warhol, Roy Lichtenstein, Olafur Eliasson, Jeff Koons, Zubin Metha, Daniel Barenboim and Anna Netrebko have co-operated with BMW. The company has also commissioned famous architects such as Karl Schwanzer, Zaha Hadid and Coop Himmelb(l)au to design important corporate buildings and plants. In 2011, the BMW Guggenheim Lab, a global initiative of the Solomon R. Guggenheim Foundation, the Guggenheim Museum and the BMW Group celebrated its world premiere in New York. The BMW Group takes absolute creative freedom in all the cultural activities it is involved in for granted – as this is just as essential for groundbreaking artistic work as it is for major innovations in a successful business.