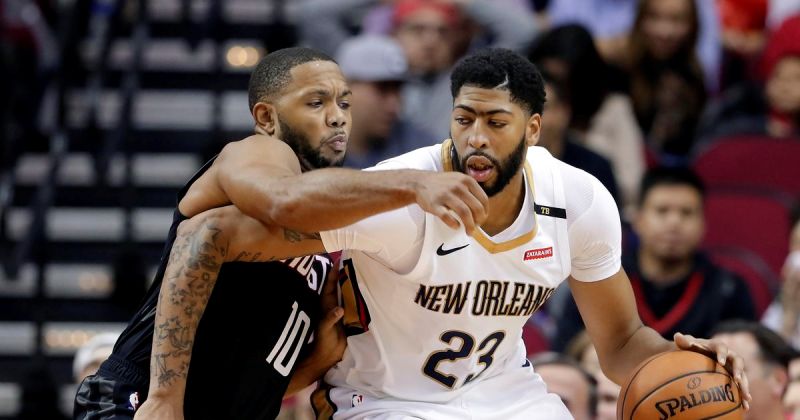 Anthony Davis scored 32 points and Elfrid Payton finished with a triple double as the New Orleans Pelicans got their NBA season off to a roaring start by clobbering the Houston Rockets 131-112 on Wednesday.

Davis also had 16 rebounds and eight assists and Payton finished with 10 points, 10 rebounds and 10 assists for the Pelicans, who led wire-to-wire.

“I am just taking what the defence gives me,” said Davis. “It is only game one. It is a good win but we still got a lot of work to do.

“To come out with a win against a team like that after the season they had and coming off the season we had, we wanted to come out and set a tempo.”

The Pelicans’ dominating win in front of a crowd of 18,000 at Toyota Center arena in Texas was one of 11 games in the first full night of the 2018-19 NBA season.

League Most Valuable Player James Harden flirted with a triple double, finishing with 18 points, 10 assists and nine rebounds, but it wasn’t enough as the Rockets failed to match New Orleans’ season-opening intensity, especially on defence.

Nikola Mirotic delivered 30 points and 10 rebounds in the blowout as the Pelicans led by as many as 29 points.

Payton and Julius Randle were the two biggest additions in the offseason. And with DeMarcus Cousins and Rajon Rondo moving to other teams, the Pelicans are going to have to develop a new personality this season.

“We are not going to shoot the ball this well every night but tonight we did a great job imposing our will on defence which led to a lot of fast break opportunities,” said Davis. “We executed our game plan to the T. When we play like this we will be tough to beat.”

Many thought the Pelicans’ 2017-18 season was done when Cousins went down in mid-season with an Achilles injury. New Orleans rallied together and swept Portland in the first round of the playoffs.

Rockets coach Mike D’Antoni expected more on opening night from his experienced squad. Houston was the most prolific three-point shooting team in the NBA last season when they finished with a franchise record 65-17 win-loss record.

They took the NBA by storm and many consider them a legitimate threat this year to dethrone the Golden State Warriors.

“It is the first game of 82. We will right the ship today, tomorrow, and the next day,” said D’Antoni.

“We kind of let go of the rope at the end of the first half. We obviously have some things to work on. We’ve got to get our legs and then go after it.”

Eric Gordon scored a team-high 21 points. Chris Paul and PJ Tucker had 19 points each for the Rockets, who are trying to replace outgoing defensive specialists Trevor Ariza and Mbah a Moute with aging veteran Carmelo Anthony and journeyman James Ennis.

Reserve Anthony, who bristled in the past about the idea of having to come off the bench, finished with nine points on three of 10 shooting in 27 minutes of playing time.

Elsewhere, Kawhi Leonard had 24 points and 12 rebounds in his Toronto debut as the Raptors beat the Cleveland Cavaliers 116-104 in the season opener for both teams.

“It’s one game,” Leonard said. “I can only see what’s in front of me right now …. it’s about right now and what I need to do to be the best player for the Raptors.”

Fred VanVleet added 14 points, while Pascal Siakam finished with 13 as Nick Nurse made his head coaching debut for the Raptors.

Kevin Love scored 21 points for Cleveland who are rebuilding after losing LeBron James to the Los Angeles Lakers.

The win was a modest measure of revenge for Toronto who were eliminated from the playoffs by Cleveland the last three seasons.

San Antonio forward DeMar DeRozan scored 28 points in his Spurs debut Wednesday after he was acquired from Toronto for Leonard in the offseason.

LaMarcus Aldridge added 21 points and 19 rebounds as the Spurs defeated the Minnesota Timberwolves 112-108.

In other games, Giannis Antetokounmpo had 25 points, 18 rebounds and eight assists, and the Milwaukee Bucks beat the Charlotte Hornets’ 113-112, while Devin Booker scored 19 of his 35 points late in the fourth as the Phoenix Suns dominated the Dallas Mavericks 121-100. – Agence France-Presse