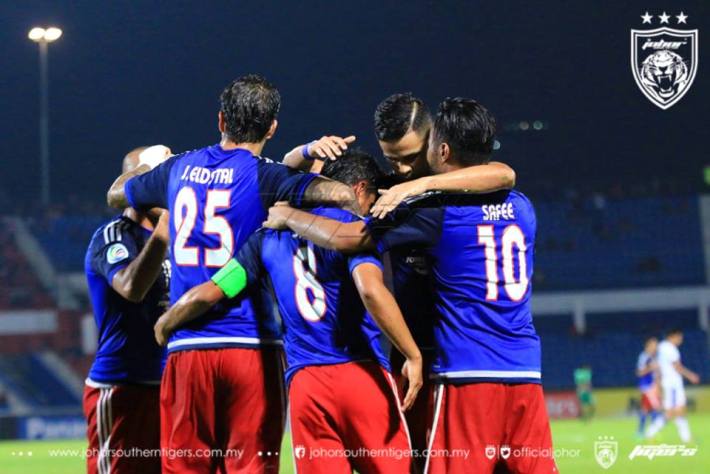 # Skipper Safiq Rahim comes off the bench to open scoring

Johor Darul Takzim (JDT) warmed for this Saturday’s FA Cup final with a crushing 3-0 win over India’s Bengaluru in their final Group H match in the AFC Cup at the Larkin Stadium in Johor Bahru on Wednesday.

After a subdued first half the homesters went on a second-half blitz to to swing the match in their favour – thanks to skipper Safiq Rahim who came off the bench to net the opener.

Ten minutes after coming on for Amri Yahyah in the 59th minute Safiq got his name name into the scoresheet although it came with a big dose of luck when his shot at goal got the boot of John Johnson and rolled past the outstretched hands of Bengaluru goalkeeper Amrinder Singh.

It was all the Southern Tigers needed to get going and it was 2-0 on 78 minutes – this time Safee Sali was rewarded for his hardwork when he sent his stiff grounder into the left corner of the net.

A minute into added time JDT were awarded a penalty when Bengaluru’s Rino Anto fouled S. Chanturu inside the box. Referee Turki Mohammed of Saudi Arabia pointed to the spot and booked Anto.

Shakir Shaari made no mistake from the spot and JDT kept their unbeaten record in Group H by winning all their six matches and a place on the top. Their reward is a home match against Kaya FC of the Philippines in the Round of 16. The match will be played on May 25.

Despite the defeat Bengaluru also advanced to the Round of 16 with nine points and will play Hong Kong’s Kitchee.