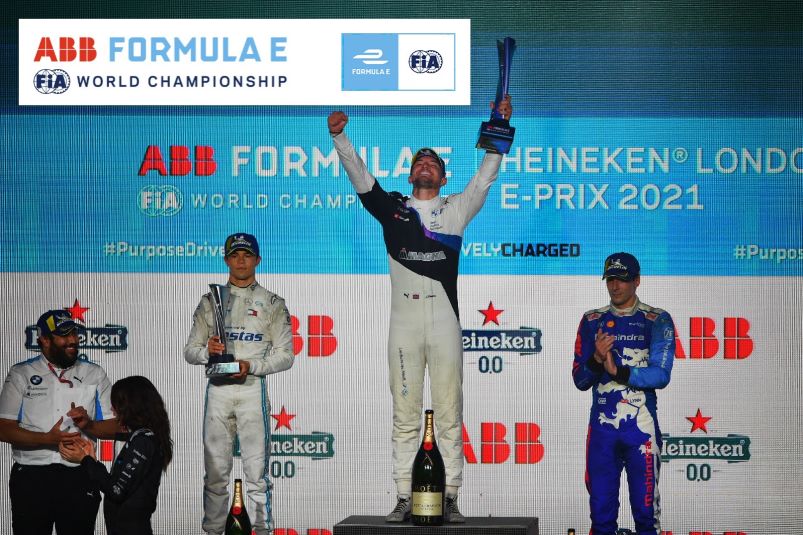 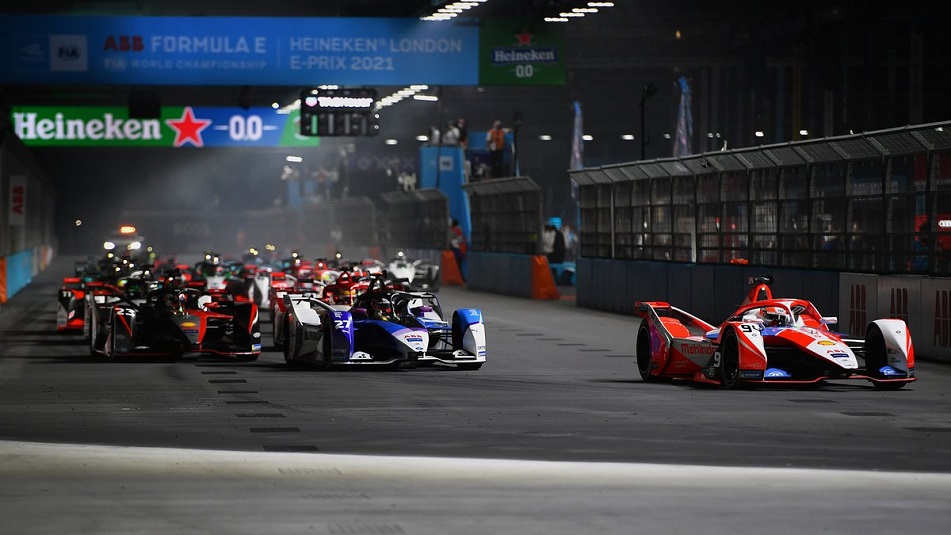 Jake Dennis catapults up to third in the Drivers’ standings of the 2020/21 ABB FIA Formula E World Championship after a dominant victory in round 12 at the Heineken® London E-Prix
Despite retiring, Jaguar Racing’s Sam Bird continues to top the Drivers’ standings with 81 points
The race – launched by music’s rising superstar Raye and marking 100 days to go until COP 26 – thrilled under the ExCeL lights before BMW i Andretti’s Dennis was presented with his trophy by English model and actress Cara Delevingne
Nyck de Vries climbed through the pack after starting ninth on the grid to finish second bringing Mercedes-EQ back into contention for the Teams’ title
Pole-sitter Alex Lynn picked up a second career podium finishing third. After challenging Dennis for the lead, a lock-up caused the Mahindra Racing driver to lose time before being overtaken by de Vries
Reigning champion António Félix da Costa of DS TECHEETAH finished eighth, closing the gap to within one point of Bird in the Drivers’ standings
Fastest Lap Group in Qualifying (1 point)
André Lotterer – 1:23.900
TAG Heuer Porsche Formula E Team
Julius Baer Pole Position (3 points)
Alex Lynn – 1:23.921
Mahindra Racing
TAG Heuer Fastest Lap (1 point)
René Rast – 1:22.340

“After such a strong qualifying, to now get the win is just sensational. I made a special helmet for this weekend, a British helmet and I’m just over the moon. It was a brilliant job by the whole team. We took a risk with the strategy, we could have played it safe but we felt like we had better pace than Mahindra and it paid off. Because it wasn’t such an energy limited race, I could do five laps fully pushing and this allowed me to create the gap to Lynn. After I saw him make a mistake at turn 10, I thought ‘“here we go for the win’”. I just needed three qualifying type laps and managed to do it and get that 2 second gap and take the win. I’m over the moon.”

“I made use of FANBOOST very well today to secure second place and Alex was very kind in that overtake moment as I think he thought we were a bit stronger at that point in the race. It’s great to come back after a pretty difficult time – partly due to own struggles, but also some things out of our control, so it’s really nice to come back here and score a podium, particularly in the way we did it. We felt strong and competitive yesterday and also from qualifying and the wet running today so very pleased to give this back to the team.”

“It’s a decent job, we got pole – finished third – with solid pace, but we didn’t have enough for Jake & Nyck. We know the race isn’t our strongest forte, so we have got to be happy with that.”