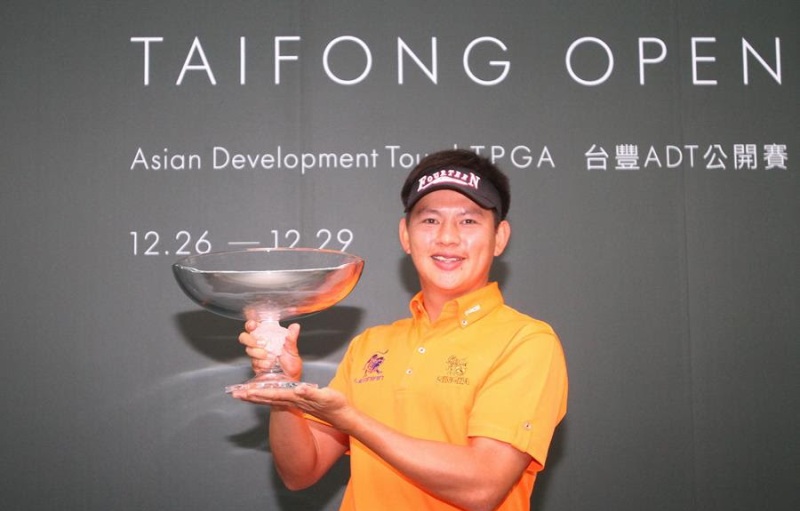 Overnight leader Donlaphatchai Niyomchon of Thailand was declared the winner of the season-ending US$160,000 Taifong Open after officials cancelled the fourth and final round due to inclement weather.

Donlaphatchai, who carded a bogey-free four-under-par 68 in the third round, completed a wire-to-wire victory to triumph by two shots with a winning total of nine-under-par 207 and claimed his maiden Asian Development Tour (ADT) title at the Taifong Golf Club.

The 29-year-old Thai would take home a winner’s prize purse of US$28,000 and propel from 94th to third place on the final 2019 ADT Order of Merit, thereby securing his Asian Tour card for the 2020 season. He also receives six Official World Golf Ranking (OWGR) points following his win.

“I am really happy. It’s a great ending to my season. I have been working very hard on my fitness for the last two years and I’m glad it has paid off. I have waited very long for this win too and I can’t wait to play on the Asian Tour next year,” said Donlaphatchai, who turned professional in 2010 and only claimed his breakthrough win on home soil last year.

Donlaphatchai is the third Thai, following Rattanon Wannasrichan (2015) and Pannakorn Uthaipas (2017), to win the Taifong Open, which was inaugurated in 2014 as the richest event on the ADT schedule.

Naoki Sekito capped a season’s haul of US$50,942 following his tied-61st place finish at the Taifong Open and became the very first Japanese to win the Order of Merit on the ADT, which was inaugurated in 2010 as a gateway to the Asian Tour.

“I can’t explain how happy I am to win the ADT Order of Merit. It’s the first time a Japanese has won the Order of Merit so I feel really honoured. I am so excited for next year,” said the 22-year-old Naoki, who has notched two wins and five top-10s on the ADT this season.

Thailand’s Pannakorn Uthaipas, Donlaphatchai and Itthipat Buranatanyarat would end the season in second (US$29,794), third (US$29,697) and fourth (US$29,672) place respectively on the final Merit rankings.

With Wang, who has already secured his Asian Tour card by finishing inside top-60 on the 2019 Asian Tour Order of Merit, finishing fifth on the money list, the remaining three Asian Tour cards will be awarded to England’s Steve Lewton, American Trevor Simsby and Seung Park of Korea, placed sixth, seventh and eighth respectively.

The leading seven players, not otherwise exempted, on the final 2019 ADT Order of Merit following the conclusion of the Taifong Open earned their Asian Tour cards for the 2020 season.

The final round, originally scheduled to start at 7.10am local time, was delayed by 30 minutes three times before officials made the decision to cancel the fourth round of the popular event, which is celebrating its sixth consecutive edition on the ADT.

“After deliberation, the organising committee has decided to cancel the final round due to continuous rain which is expected to last throughout the day and conditions were deemed unplayable due to low visibility,” said Jittisak Tamprasert, Asian Tour Director of Rules & Competitions.

“The 2019 Taifong Open has been shortened to 54 holes and overnight leader Donlaphatchai has been declared the winner of the tournament,” added Jittisak.