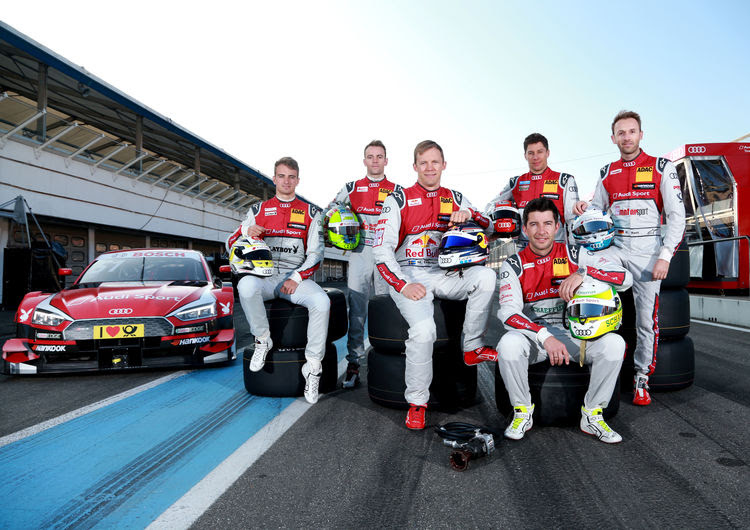 #In closer touch with fans and more spectacular cars in the 2017 DTM
#Admission to pits, opening of the pit roof and DTM Fan Village
#Head of Audi Motorsport Dieter Gass: “Exciting times for the DTM”

In the coming DTM season, fans will be able to experience the Audi RS 5 DTM and the work of the teams at a closer range than ever before: at nearly all DTM events, owners of a paddock ticket will be admitted to a dedicated spectator pit from which they can directly watch the mechanics at work in the two adjacent garages.

The “Pit View” is one of numerous new features announced at a press conference held in Hockenheim on Thursday on the occasion of the final tests before the season opener on May 6/7. The pit roof will be opened for the spectators at most of the DTM events as well. Also new will be a public pit stop practice, plus a dedicated Fan Village in the paddock featuring a program of shows, exhibitions and food trucks.

“These are exciting times for the DTM,” says Head of Audi Motorsport Dieter Gass. “With the Pit View we’re offering fans at the venues an opportunity to gain completely new insights by peeking behind the scenes. We intend to make motorsport even more spectacular and are bringing new cars with more power, a throatier sound and less downforce to the field for this purpose. The tires degrade faster, are no longer preheated and make even greater demands on the drivers than before. During the pit stops with fewer mechanics, every mistake will be immediately visible. The format is identical for all 18 races. I’m very much looking forward to the new season.”

Simulations of the new pit stop were part of the test schedule of the three Audi Sport Teams, Abt Sportsline, Phoenix and Rosberg, at Hockenheim as well. However, gathering as much data and information as possible about the new Audi RS 5 DTM with different setup variants and the new tires on the three and a half test days was even more important. The fastest lap within the Audi squad was driven by Mike Rockenfeller in the Schaeffler Audi RS 5 DTM on Thursday when the test conditions were best due to cooler track temperatures. Clocked at 1m 30.559s, he beat the existing DTM track record at the Hockenheimring by more than 1.6 seconds.
In total, the six Audi drivers reeled off 5,992 test kilometers from Monday to Thursday. The busiest drivers were René Rast (280 laps) and Nico Müller (276 laps). “I had a lot of fun with the new car,” says the Swiss. “We had an extensive test program. I’d say we completed 99 percent of it. Now we’re going to use the remaining weeks before the season opener to perfect the final details.”

The teams are now going to dismantle the cars once more, rebuild the components and reassemble them. In the last week of April a final functional check (rollout) is planned before racing in the DTM 2017 starts in earnest on the first weekend in May. Dieter Gass sees Audi in a good position in terms of its driver lineup: “Mattias (Ekström) and Jamie (Green) were consistently among the front runners in the DTM the last two years – that’s what I expect of them again this year. I expect Mike (Rockenfeller) to be making a good comeback after he suffered somewhat in 2016. Nico (Müller) showed good potential last season which he built on during the Hockenheim test. And our two DTM rookies, René (Rast) and Loïc (Duval), should not be underestimated. I’m sure that both of them will be able to set a highlight even in their first season.”