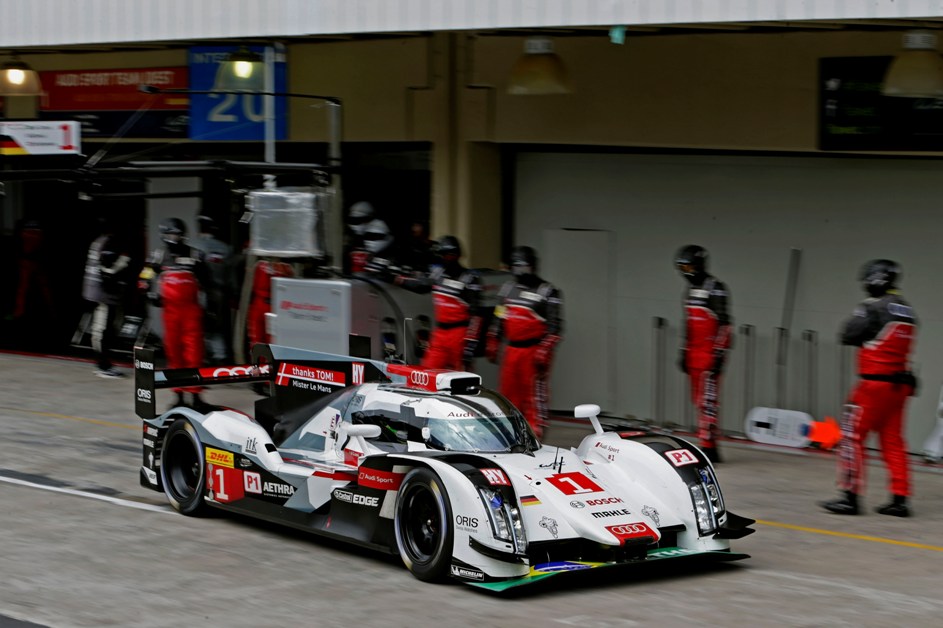 Audi was pleased to finish the finale of the FIA World Endurance Championship (WEC) on a positive note. The brand with the four rings achieved its sixth podium result of the season at São Paulo with Tom Kristensen securing another trophy in his last race as a pro. Audi closed the year in second place of the manufacturers? standings, while Marcel Fässler/André Lotterer/Benoît Tréluyer (CH/D/F) took second place in the drivers? championship. Following a remarkable recovery, the trio in the number 2 Audi R18 e-tron quattro battled its way forwards from the last to fifth place.

Top performance all the way to the end: In his last race, Tom Kristensen once more proved his prowess. Together with Lucas di Grassi (BR) and Loïc Duval (F) the nine-time Le Mans winner, in third place, clinched his last trophy for Audi in Brazil. In the thrilling final stage, he prevailed against the number 7 Toyota ? thanks to excellent lap times with low fuel consumption. The Dane, who had announced the end of his professional career before the last race of the season, experienced an overwhelmingly emotional weekend brimming with recognition. A medal presented by the Brazilian Automobile Association, a lap of honor on Saturday, the inscription ?Thanks Tom ? Mister Le Mans? emblazoned on the number 1 Audi R18 e-tron quattro and a finish with messages from all WEC teams and honors on the podium provided the Dane with an unforgettable finale after 138 Sport, GT and touring car races with Audi. For Lucas di Grassi, the result was a special one as well. After having started from position six, the Brazilian who was born in São Paulo presented himself to his home audience in top form.

The sister car, designated as number 2, had chances of clinching a podium result as well in spite of a setback. After Benoît Tréluyer, during the first race lap, had to have a system reset performed and dropped to the back of the field, he started his recovery. Only 30 minutes later, the Frenchman had battled his way back to sixth place. His team-mate André Lotterer underscored the pace of number 2 by setting the fastest race lap. Ultimately, the 2012 World Champions took fifth place following the body damage repairs. After an accident of Mark Webber, in which the Australian suffered no major injuries, a safety car period ended the race.

At the end of the third FIA WEC season, Audi looks back on a successful interim tally. In 24 races since 2012, the company has scored 13 victories (rate: 54 percent), which makes it the most successful marque in the LMP1 class. Two World Championship titles in the drivers? and manufacturers? classifications in 2012 and 2013 complete the sporting results. The highlight of the 2014 season was the success at Le Mans in June ? marking Audi?s 13th win in the iconic 24-hour race since 2000.

Dr. Wolfgang Ullrich (Head of Audi Motorsport): ?This was a very emotional weekend. It?s fantastic that Tom Kristensen on his last double stint still defended the podium place. We managed to end the FIA WEC season on a positive note in Brazil. It?s great that we managed a podium finish although our aim, obviously, is to be on the very top of the podium.?

Chris Reinke (Head of LMP): ?2014 was an emotional roller-coaster ride for us. That was true for the Le Mans 24 Hours but applies to the WEC season as well. The way we closed the season wasn?t ideal but it ended on a positive note. The highlight of the weekend, no doubt, was the farewell of Tom Kristensen, who?s been with us for such a long time. We thank him very much ? he had a part in shaping our sweetest successes.?

Ralf Jüttner (Team Director Audi Sport Team Joest): ?Congratulations to Porsche on their first victory. We made the best of our potential. The greatest part about it is Tom finishing on podium in the final race. He more than deserved this champagne shower. If there?s a driver that can do a particularly good job of saving fuel while extracting the best possible performance from the Audi, it?s Tom. We?re taking a successful season finale into the winter break and will be going for all-out attack again in 2015.?

Lucas di Grassi (Audi R18 e-tron quattro #1): ?This was one of my toughest races of the whole season. At the end, with Tom?s farewell, the situation was very emotional again. We gave everything but, unfortunately, had a few minor problems. Still, we never gave up. It?s great to be on the podium here in my hometown São Paulo. And it?s particularly sweet to be able to share this moment with Tom ? simply incredible!?

Loïc Duval (Audi R18 e-tron quattro #1): ?I?m happy about our successful close of the season, particularly for Tom. The race was anything but easy. But we were in contention and mounted the podium ? a great reward for the team. And of course I?m happy that Mark Webber didn?t suffer any serious injuries.?

Tom Kristensen (Audi R18 e-tron quattro #1): ?A big ?thank you? to everyone! I finished my first race with Audi at Sebring in 2000 on the podium and ending my career I?m on podium again ? after a difficult race. To save another pit stop we had to drive more efficiently towards the end. That was on my stint. It was another exciting stage until the safety car was deployed. Congratulations to Porsche on their first victory and to Toyota on winning the title. And I?m happy to have spent my career at Audi with the best team in the world. Emotionally, this was the best weekend in my career.?

Marcel Fässler (Audi R18 e-tron quattro #2): ?It was a great honor for me to drive in the same team together with Tom Kristensen. Obviously, saying goodbye to such a great racer is a huge step and a loss for us. As far as our car is concerned: we were unfortunate right at the beginning and had to reset the systems. Unfortunately, that cost a lot of time and afterwards we started a recovery. In the end, the joy of being the runners-up in the World Championship outweighs anything else. It was a tough, difficult season that we can still be proud of with this final result.?

André Lotterer (Audi R18 e-tron quattro #2): ?We drove another strong race at the end. I?m particularly happy for Tom Kristensen, who has crowned the end of his career with another podium place. Whenever a racing legend like Tom retires it?s a really special occasion. He?s been a role model for me and always inspired me. Actually, except for a few problems that unfortunately cost us the podium, our race went well. I enjoyed the car and the pace was right too. In addition, we managed to set the fastest race lap.?

Benoît Tréluyer (Audi R18 e-tron quattro #2): ?I?m overjoyed that Tom was able to celebrate a podium result in his last WEC race. Just like his team-mates, he showed a remarkable performance. At the same time, I?d like to congratulate Porsche on their first victory. It was a difficult race for us and we suffered a few setbacks. Still, our car was fast. We scored some points again at the end ? that was positive.?