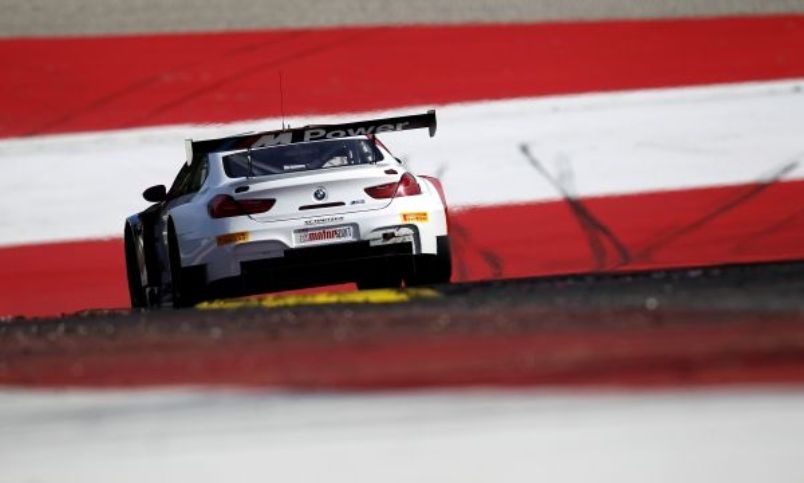 After victory at the season-opener in Oschersleben (GER), the BMW Team Schnitzer once again reached the podium at the third race weekend in the ADAC GT Masters. Local favourite Philipp Eng (AUT) and BMW Motorsport Junior Ricky Collard (GBR) celebrated a third-place finish in the first race at the Red Bull Ring (AUT). Collard had driven in qualifying and also started the fifth race of the season with the BMW M6 GT3 in Spielberg (AUT).

The BMW Motorsport Junior showed his class to improve by one position in the early phase of the race. He was one of the first from the leading group to make a pit stop. Collard handed the car over to his team-mate Eng in fourth place. The BMW Team Schnitzer briefly fell back to eighth place after all the drivers had completed their pit stops.

However, Eng battled back and moved up several positions with some impressive manoeuvres. The race was interrupted eleven minutes before the end as a car had come to a halt in the middle of the start-finish straight after an accident. Eng made his decisive overtaking move just a few minutes after the restart and claimed third place after another outstanding display of driving skill.

After an incident just before the end of the race, the Safety Car made another appearance. The race was not restarted again, confirming the second podium success of the current season for the BMW Team Schnitzer. The duo Eng/Collard claimed fifth position in the second race of the weekend to defend their second place in the overall standings. For the first time this season, a second BMW M6 GT3 competed in the ADAC GT Masters. Jakub Knoll (CZE) and Michael Fischer (AUT) finished in 17th position on Saturday. The Šenkýr Motorsport Motorsport drivers finished 22nd in Sunday’s race.

International GT Open: first win of the season for the BMW M6 GT3

The BMW Team Teo Martín celebrated the first win of the season in the International GT Open at the weekend. The third event of the year took place at the “Circuit Paul Ricard” (FRA). Victor Bouveng (SWE) and Fran Rueda (ESP) started Sunday’s race in the BMW M6 GT3 from fourth place and completed the win in the #65 car after an outstanding display of driving and team tactics. The duo Bouveng/Rueda had already celebrated the first podium finish for the BMW Team Teo Martin two weeks ago at the race in Spa-Francorchamps (BEL), finishing in second place.

Bouveng and Rueda mounted a superb chase in Saturday’s first race at Paul Ricard, crossing the line in fifth place after starting from 14th. BMW works driver Augusto Farfus (BRA) was very unlucky on his debut in the International GT Open with the DTM driver and his team-mate Lourenço Beirão (POR) retiring early in both races. Farfus had taken the lead right from the start in the first race and defended his position until the pit stop and subsequent retirement.

BTCC: win for Turkington and a milestone for West Surrey Racing

An historic triumph for the West Surrey Racing team in the British Touring Car Championship (BTCC): Colin Turkington (GBR) claimed first place in Sunday’s second race at Croft (GBR) to celebrate the 75th BTCC win for the Sunbury-on-Thames (GBR) team. It was also the 50th win for West Surrey Racing with BMW. Turkington had already reached the podium by finishing second in the first race.

He claimed sixth place in the third race. His team-mate Rob Collard (GBR) can also look back on an impressive sequence of results; his third place in the second race at Croft means that Collard is the only driver in the BTCC to have reached the podium at least once on each race weekend of the 2017 season. He finished the other races in fourth and eighth places in the BMW 125i M Sport. Andrew Jordan (GBR), who celebrated his first-ever BTCC win at Croft in 2010, finished the races in sixth, fifth and seventh.

The Northern Cup in the GT4 European Series also took place in Spielberg (AUT) this weekend, as part of the ADAC GT Masters. Ricardo van der Ende (NED) and Max Koebolt (NED) from Ekris Motorsport were unbeatable in both races at the Red Bull Ring (AUT). They topped the podium twice after winning the races on Saturday and Sunday. The two drivers now have 119 points and a commanding lead in the Silver Cup. Ekris Motorsport has the same number of points in the team championship after this weekend’s results.