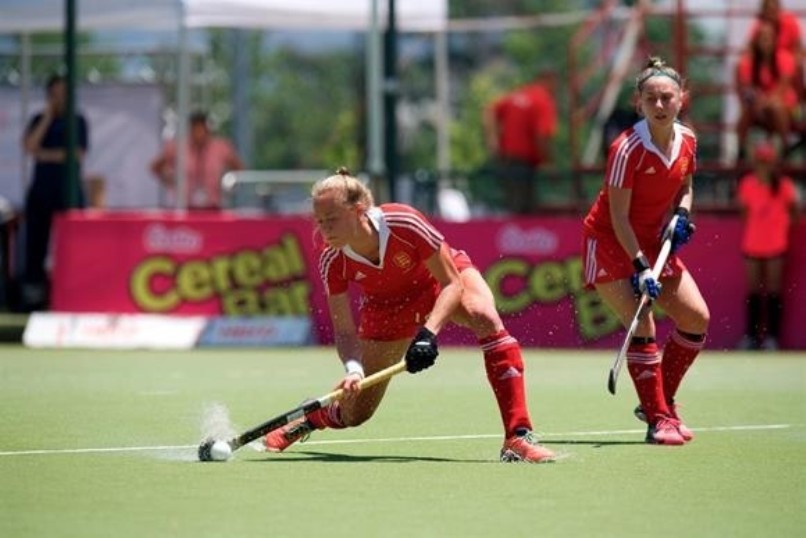 England, Germany and Australia completed the line-up for the Quarter-Finals following the final Pool B and C matches at the women’s Hockey Junior World Cup 2016 currently being played in Santiago, Chile.
The joined Netherlands, Argentina, USA, Spain and Belgium in the Quarter-Finals thanks to their respective results today.
Argentina made sure of top spot in their Pool as they defeated France following Germany’s win against Japan earlier in the day.
A draw with South Africa was enough for England to take second spot in Pool C as Australia defeated hosts Chile in the evening to finish top.
Following a rest day tomorrow, the Quarter-Final line-up for Wednesday 30 November is as follows (all times local – CLST):
13:15: Netherlands v Germany
15:30: Spain v England
17:45: Argentina v USA
20:00: Australia v Belgium
Here’s a summary of all the day’s action:
Pool B:
Germany just needed a draw against Japan to secure qualification for the Quarter-Finals, but they bettered that as they swept aside their Asian opponents thanks to a composed performance in front of goal. Victoria Huse added to her goal tally as she converted a penalty corner after 26 minutes whilst Teresa Pelegrina Martin doubled their lead in the 34th minute from open play thanks to some exquisite skill from the German star. Japan were at times the better team but Germany’s resilience paid off as they held on to win 2-0.
Afterwards German goal-scorer Teresa Teresa Pelegrina Martin said: “It was a very tough game against Japan.
They played very well, we had to defend very hard.” Her team mate and fellow goal-scorer Victoria Huse added: “In the last five minutes we were down by two players so it was a tough fight – it was so hard, but we fought hard and beat them.” For the full interview, click here.
Argentina meanwhile finished top of the Pool as they defeated France. The European team’s defence was solid in the first half, denying Argentina’s attack on several occasions to keep the score 0-0 going in to the half-time break. Argentina however persevered and eventually broke the deadlock two minutes into the second half through Eugenia Trinchinetti.
Then the floodgates opened. The Pan American champions went on to score eight goals in total, including a hat-trick for Julieta Jankunas, with France unable to find a consolation goal as they finished bottom of the Pool.
Pool C:
South Africa and England opened the day in some style in a six goal thriller. England dominated early proceedings, with Holly Hunt and Holly Munro giving England a 2-0 lead. South Africa captain Natalie Esteves then scored at a crucial time, seconds before the end of the half, from a penalty corner. England restored their two goal advantage as Megan Crowson converted a penalty stroke after 41 minutes but South Africa fought back again.
Two goals from open play from Donna Small brought the African champions back level and gave England a nervous few moments in the closing stages. England held on for the draw however, giving them a crucial point to secure qualification for the Quarter-Finals as Pool C runners up. Speaking after their comeback, South African goal hero Donna Small said: “We started well. Our goal was to play the full 70 minutes at 100% and I think we did that. At half-time we were down but came back firing. But in the end it’s a little bit disappointing we didn’t finish third in our Pool.” For the full interview, click here.
Later in the evening, Australia needed a point to secure qualification, whilst their opponents Chile needed a win to remain in the medal hunt. A local crowd turned out in force once again but the hosts suffered the worst possible start as Australia’s Renee Taylor scored her second goal of the tournament from a penalty corner after only six minutes.
This didn’t dampen the spirits of the locals though and Chile continued to attack and their efforts paid off when captain Denise Krimerman equalised in the 22nd minute from a penalty corner. Australia always looked to more dangerous in attack and after 55 minutes their captain, Mariah Williams, scored the decisive goal after a scramble in the D. Whilst the local crowd buoyed their team on they could not find another goal as Australia won 2-1 to finish top of the Pool.
Speaking afterwards, Australia’s Mariah Williams said: “That was a really intense game tonight – the Chilean fans are brilliant! But going into the Quarter-Finals we have to start well from the beginning (of matches), that’s how we will improve on our performances so far.”
Tickets for the event, which is taking place from 24 November until 4 December, are on sale and can be purchased by clicking here. Those who cannot attend can watch the livestream of all games provided by the hosts by clicking here.
Fans can find scores, standings, photos, videos and more via the official event website on FIH.ch as well as through FIH Twitter, Facebook and Instagram using the hashtags #HJWC2016 and #RockTheJuniors.
RESULTS