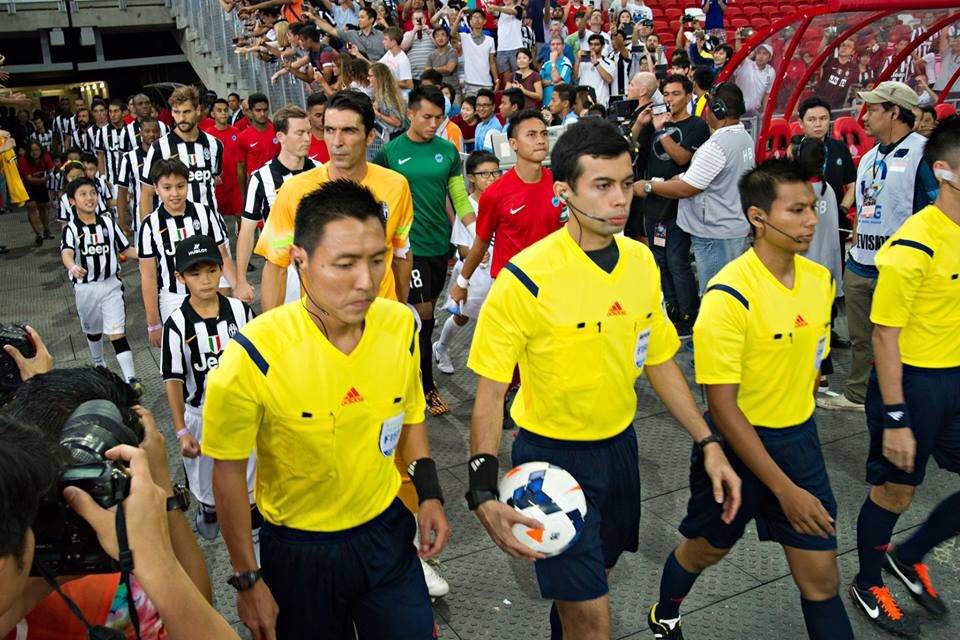 THE question of the credibility of fair referee grading at Football Association of Singapore (FAS) has come under severe examination. In the latest incident, a senior ref assessor claims that he was told to “change the marks of a refereeing team of four match-officials” after a RHB Singapore Cup match at Hougang Stadium on Tuesday, between Hougang United and Philippines’ Ceres-Negros FC. Hougang won 1-0.

An exchange of words over email pursued with the FAS Referees Department (FASRD), ending with the ref assessor, who is a former FIFA assistant referee and an AFC Ref Instructor, throwing in his towel if his examination credentials were questioned.

He cannot be named but it is understood that he refused to back down and bitingly told the FASRD that he might as well change the marks to the maximum 10, if they so wished.

Referees in the S-League, Prime League and National Football League (NFL) are graded from four to 10 marks. The expected cut-off for a good grade is eight marks.

“I’m not surprised to hear this because they (FASRD) have been doing this rather recklessly for some time,” says a senior assessor, who declined to be named. “It just reflects on the honesty and credibility of those running the show and I must say it’s very depressing.”

Others have pointed out to prolonged referee favouritism, inconsistent checks and balances in referee-grading and lack of overall professionalism in FASRD and FASRC (FAS Referees Committee) for the continuing low morale among the men-in-black.

A retired FIFA referee said it was “close to impossible” to change a referee assessor’s grades unless there’s “overwhelming evidence of wrong-doings with accurate video evidence”.

NEUTRAL JUDGMENT
“How can they simply ignore the grades and over-rule the appointed assessor, whose job is to do a neutral judgment of the match officials?” he said. “This is tantamount to cheating or fixing the grades. They must respect the marks from the assessor.”

For the men-in-black, assessments are like regular tests to ensure they remain consistent in match-performance and interpretations of the Laws of the Game. As a rule of law, assessment becomes as much a part of their job as making sure they have their whistle, cards and little black book, getting them acclimatised to the business of being constantly appraised and challenged.

There can never be any compromise in the degree of fair play and scrutiny referees are under, says a retired Asian Football Confederation (AFC) match-commissioner.

“You know we are judged by the clubs, by spectators, by ourselves on how well we have done on the pitch. So from the first time you pick up a whistle you are being judged. It’s about putting the right mechanisms in place – this is how we evaluate performances, this is how we judge you, this is how we help you deal with judgment from the outside world.”

FAS referee assessors comprise former referees who have performed at the highest levels. Their marks are handed out according to an evaluation scale which ranges in small increments from five “Very Poor Performance (unacceptable)” to 9.0 – 10.0 “Excellent performance (outstanding)”.

A critical element is how referees rate in what is known as KMI – a key match incident. The number of KMI errors is a significant part of the calculation – each one is worth roughly half a mark.

LACK OF PROFESSIONALISM
A senior referee, with 20 years experience, said there’s an “absolute lack of professionalism at FAS in handling the referees at every level”. He explains: “There are too many clique systems and manipulations have been going on, which has demoralised a vast majority of the referees.”

He questioned the audacity of the FASRD Head of Department (HOD) to change the assessment marks without consulting the FASRC, which usually makes the rules for the men-in-black.

He asked: “Who is having the bigger say in match-assessment? No one is above the law and the grades given by the referee assessor must be respected if law and order really prevails.”

Another veteran retired FIFA referee called on newly-elected FAS President Lim Kia Tong to set up an independent committee to review the protocols of FASRD and FASRC for genuine credibility to be maintained.

“The way the assessment of referees, which determines future promotion, is done is like a ‘pasar malam’. If you’re in the right camp, you can get your marks changed! Bottom line, it’s going to the dogs, believe me, because of poor overall management.”

“There must be an element of serious competitiveness in refereeing that is necessary. There are about 20 referees at this top level who all want the opportunity to referee in the S-League and Prime League, so they are competing against each other all the time,” said a senior referee. “Everyone in the refereeing game must be law-abiding and lay it on the line with genuine officiating and assessment.”

The Football Association of Singapore (FAS) management did not respond to queries by press time. – BY SURESH NAIR

• Suresh Nair is a Singapore-based journalist who is also an AFC-Licenced coach and a referee instructor.