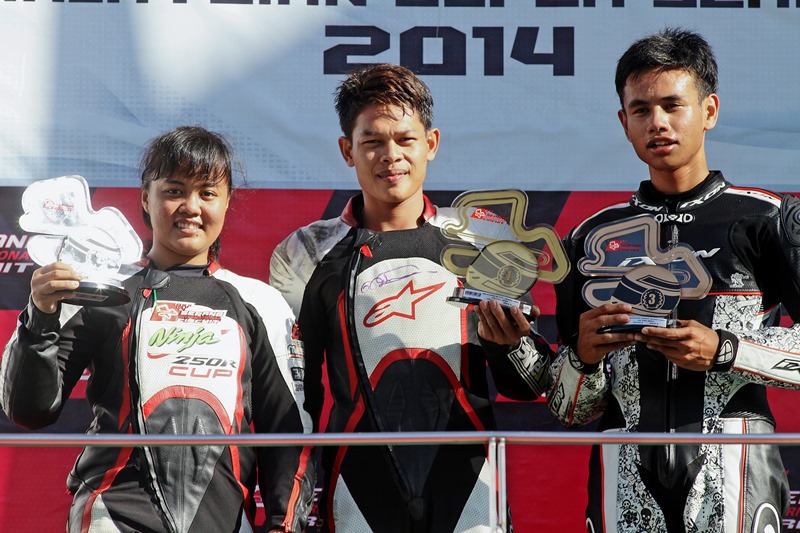 Well-liked and fondly known as Fifi in the paddock, the Bike Art Racing rider secured the overall title after clinching second place in Race 2 today to collect 20 championship points to put her two points ahead of Muhammad Jazli Juraimi of Chia PJ Racing Team after five rounds.

Second in yesterday’s opening race for the round, Fifi attributed her success to the support of the team especially her Bike Art Racing team-mate Fazli, who won both races for the round.

“I would say this is a team effort. And, I must really thank Bulat (Fazli) for his support. We approach the last two races as a team and secured a 1-2 to allow me to win the overall title. I would also like to thank my trainers at Bike Art Racing Team especially our team Principal Abang Ahmad Zamani (Baharuddin).

“I am very happy to win. It is unexpected in a way. When we first started the championship, I had never targeted the overall title. But, after three rounds, I find myself among the top contenders and we then put extra effort to challenge the crown. I am grateful to win it,” said the Johor-born lass, who was also the first lady racer to win an MSS race.

Two years ago, competing in the SIC Ninja 250 Cup as a sprightly aged 17-year-old, Fifi scored a sensational win on 15 September 2012 to join Super GT, Cyndie Allerman of Switzerland, who was the first lady driver to win at the MSS when she partnered Hong Kong’s Samson Chan to win the Super GT race in a Ginetta G50Z in May 2012.

With the MSS overall title, Fifi said she would be offered a seat by the Bike Art Racing team to compete in the 250cc class at the Asia Road Racing Championship next year along with an opportunity to defend her title.

Commenting on his race, Fazli, who was 2012 SIC Ninja 250 Open champion, said that he was very happy to help Fifi to win the overall crown today.

“We develop a strategy with the team. We know that we need to finish ahead of Jazil. So, we pushed hard for the two 1-2 finish. I am so happy for Fifi,” said Fazli, who took 21 minutes 42.812 seconds to complete the race.

Finishing 0.182 seconds behind her team-mate, Fifi had to fend off the challenge of Jazil throughout the eight-lap contest; edging out her rival in a photo finish with a mere 0.074 seconds to the cheers of her supporters.

Competition in all the other MSS categories – Superbike, Superstock, Supersport, SIC Ninja 250 Cup and MGP-3 class – continues with their final races tomorrow.

Also included in this weekend’s MSS programme is the final round of the KTM Duke Battle, which features finalists from preliminary rounds held in eight states including Melaka, Perak, Selangor, Johor, Pahang and Kedah.

Supported by KTM, Pirelli, Total, Gracshaw Helmets, MC Sport and Red Bull, the event is aimed at giving the not financial strong youngsters an opportunity to experience competitive racing under professional guidance as well as to expose the “ready to race” genes in the KTM 390 Duke machines.

Featuring 15 riders for each state round, the Top 2 finishers qualified for the Finals, which features two races over the weekend.