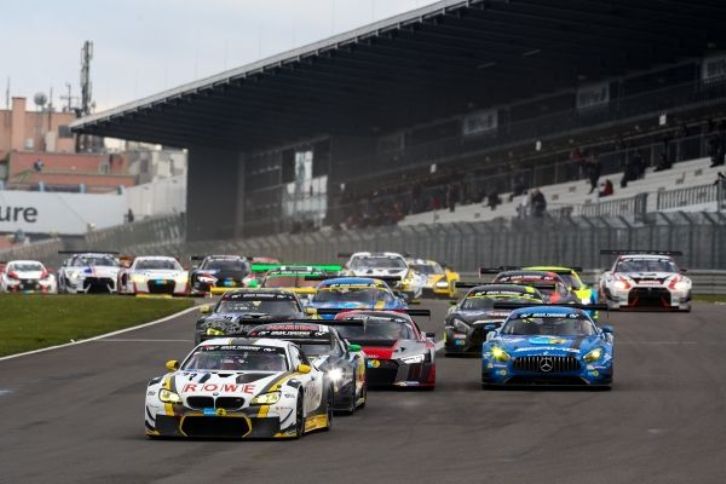 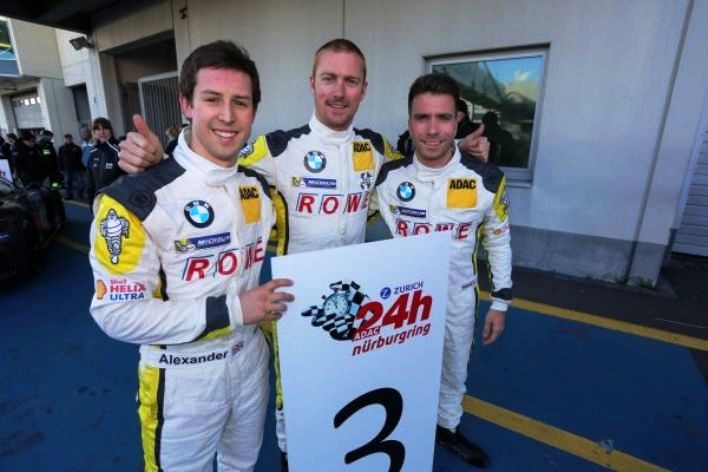 On only its second outing on the Nürburgring-Nordschleife (DE), the BMW M6 GT3 celebrated its first ever podium finish in the “Green Hell”. Maxime Martin (BE), Philipp Eng (AT) and Alexander Sims (GB) took third place at the 24h qualifying race with the number 23 BMW M6 GT3 of ROWE Racing.

On 28th and 29th May, the new BMW M6 GT3 will debut at the legendary 24-hour race. The qualifying race mainly served as an intensive test in the preparation for the endurance classic in the Eifel mountains.

The weekend in the Eifel region was characterised by typically unpredictable weather conditions. Temperatures were low, with a mixture of sunshine, rain and even hail. The changeable nature of the weather affected the early phases of the six-hour race, before the sun gradually gained the upper hand.

Martin drove the fastest time in the second qualifying session on Sunday morning, securing the first pole position on the Nürburgring-Nordschleife for the new BMW M6 GT3. The Belgian also started the race, taking a commanding early lead. After 20 minutes, heavy rain and hail set in over a section of the circuit and the team decided to make an unscheduled pit stop to change tyres.

The #23 BMW M6 GT3 dropped out of the top 20, but Martin, Sims and Eng quickly worked their way back to the front. An exciting finish saw the final driver, Sims, take the third podium spot.

Jörg Müller (DE), Marco Wittmann (DE) and Jens Klingmann (DE) drove the sister car, with start number 22. They suffered some bad luck: Müller was hit by another car right after the start, damaging the front of the vehicle.

After it took one hour and 20 minutes to repair the car, the trio were able to rejoin the race. Müller, Wittmann and Klingmann finished in 50th position. All three were competing as “guest drivers” for ROWE Racing and in the 24-hour race they will be in the BMW M6 GT3s from Schubert Motorsport. 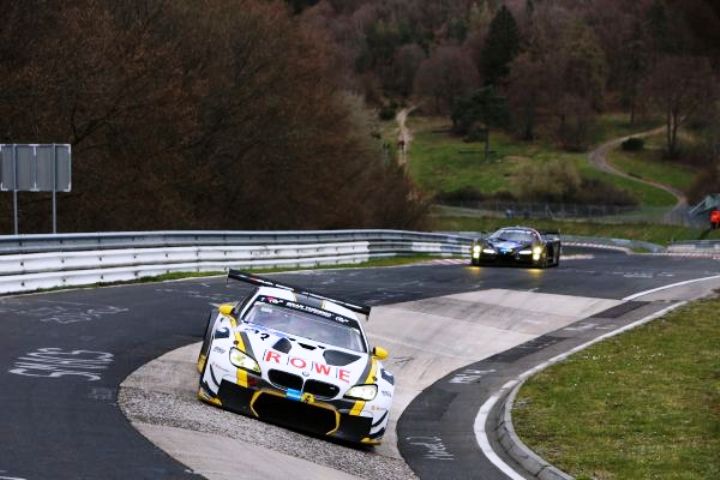 BMW DTM driver Tom Blomqvist (GB) once again competed in the BMW M235i Racing from Walkenhorst Motorsport. He used the qualifying race to familiarise himself further with the Nordschleife before taking on the 24-hour race in the BMW M6 GT3 from Walkenhorst Motorsport. After a tumultuous six hours, Blomqvist and his team-mates Alex Lambertz (DE) and Marc Ehret (DE) finished in 51st position. Victory in the BMW M235i Racing Cup Klasse went to Norbert Fischer (DE), Christian Konnerth (DE) and Gabriele Piana (DE) from Pixum Team Adrenalin Motorsport.

“We improve the car every time we get on track, and that was proven by the fact that we got pole position. We have to keep an eye on everything we are doing and learn as much as possible. But it is a good sign that we were fast here. I had a good start, and a nice first lap, I was able to pull out a gap. Conditions were difficult, because some parts of the track were totally dry and some were wet. The BMW M6 GT3 is a strong package, and it is getting better and better every time we are on track.”

“I think it was a very, very good day, we made some good improvements on the car. It’s really easy to drive, gives a lot of confidence to the driver. We did some basic set up work again, and that seems to have worked out really well. We did a solid job today. We’ve had so many different weather conditions this weekend, so we were able to try all sorts of tyres, and test the BMW M6 GT3 in practically every way. Every kilometre we drive helps, and we are making great progress.”

“I am very happy. In the end, I think we did a very good job overall. We maybe played a little bit safe with strategy at some points in the race, but we are still on the podium. By the end of the race I was able to get a few really nice, clear laps, which is very rare here. It was a really nice day driving the BMW M6 GT3, and I think we are starting to be in a pretty good position for the 24-hour race.”

“It is certainly a pity to be involved in an accident in the very first chicane, especially in a race like this, when every completed kilometre is valuable for our test work. The ROWE Racing team did a great job in bringing the car back into the race and after the repair, our BMW M6 GT3 really ran like a clockwork. As we have a brand new race car, every lap is important for us as we need to gather as much information as possible. This 6-hour race at the Nordschleife was the perfect opportunity to do so, as only 70 cars participated and we were able to complete numerous laps without traffic. Overall I am satisfied with the progress we have made, but we still have some work to do.”

“Despite the misfortune on the opening lap, we can still look back positively on the race. The BMW M6 GT3 is already very good, and we once again discovered and learned a lot more this weekend. That was our goal, in order to be well prepared for the 24-hour race. We have taken another big step forward with the car.”

“After the crash we used the race as a test. As such, we were able to work through a lot of different points. That was important for the team and BMW Motorsport in preparing for the 24-hour race. Furthermore, we drivers were able to get a lot of kilometres under our belt, which is always a big positive. I think we gained a lot of experience, which will help us in preparation for the 24-hour race.”

“I think we definitely had the full spectrum of Nordschleife conditions today. It was a challenge. It started dry, with some damper areas on track, then on my second lap it was beginning to hail. Three laps in it absolutely bucketed down, like hardcore hail. To race here with the BMW M235i Racing was an important experience as you are learning with every lap. That will help me when I am in the BMW M6 GT3. I quite like endurance racing. It is a different way to go racing, you have to consider different things. Sharing the car with other drivers, the little compromises you have to make, is something I am not used to. I love the Nordschleife. It takes a while to get the hang of it, but I am feeling comfortable here now, looking forward to every lap. I can’t wait to drive the BMW M6 GT3 here.”