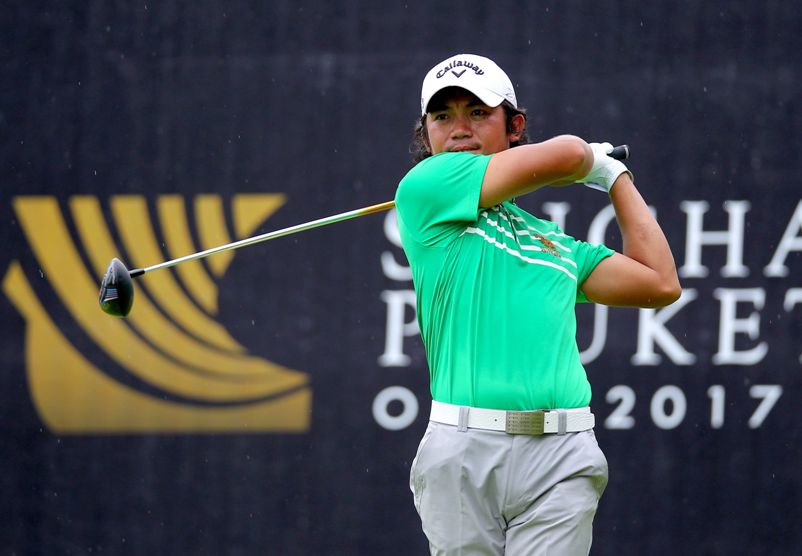 Local hope Pattaraphol Khanthacha brilliantly stayed bogey-free for the second straight day at the weather-disrupted Singha Phuket Open, signing for an identical six-under-par 64 to grab the clubhouse lead by one shot on Friday.

The 26-year-old Thai nailed six birdies to move atop the leaderboard with a two-day total of 12-under-par 128 at the two million baht (approximately US$58,140) Asian Development Tour (ADT)event, co-sanctioned with the All Thailand Golf Tour.

Thai duo Atthaphon Sriboonkaew and Voramate Aussarassakorn returned with solid rounds of 63 and 62 respectively to share second place while Singapore’s Mitchell Slorach was amongst those bunched in fourth on 130 following a 66.

The second round of the Singha Phuket Open was first suspended at 11.10am local time due to heavy rain. It resumed an hour later but was suspended again at 11.25am. Play resumed at 2.00pmbefore official decided to call it a day at 5.00pm due to inclement weather.

A total of 60 players, all playing in the afternoon session, have yet to complete their rounds. They will return to the Laguna Golf Phuket to resume their rounds at 7.00am on Saturday, with the third and penultimate round scheduled to start not earlier than 10.45am.

Pattaraphol, a one-time winner on the local circuit, was pleased to keep the bogeys away from his card. “My plan was to make as few bogeys as possible this week. I have made none in two days so I am really pleased with my performance so far. I wasn’t worried about not making birdies. I just try to avoid making mistakes and dropping any shots out there,” he said.

“The conditions got tough towards the end of the round with the rain delays but I managed to hang in there. I was lucky because I still managed to hit the fairways after the rain, making it easier for myself to hit approach shots. I sank a few putts today which was key for me too.

“The aim is to finish inside top-three on the leaderboard on Sunday now. I can’t control the results of other players so I will try to do my best. If I can continue to avoid the mistakes and keep making birdies, I should have a good chance to win,” added Pattaraphol.

Atthaphon, who returned with a bogey-free round highlighted by seven birdies, rode on a hot putter to launch his bid for a career breakthrough on the region’s secondary circuit.

“I putted really well today. I finished the round by rolling in from 10 yards for birdie on the par-four 10. I was able to hit a lot of greens in regulation too. I was quite lucky because I was left with only a few holes before the suspension came so that didn’t really affect me.

“I played with Mitchell (Slorach) and Nattawat (Suvajanakorn) and all of us played well. I guess we were able to rub off some good vibes from one another out there. Both of them hit some great shots today and we all had fun,” said the 38-year-old Thai.

Starting from the 11th, Slorach got off to a superb start with three birdies in a row from 12. He dropped a shot on sixth but recovered brilliantly with an eagle on par-five seventh.

“I got off to a good start but didn’t manage to hole anything for a while after that. I left a few birdies out there today unfortunately but overall, it was still quite solid. I had a good drive on the seventh and hit it to two-feet for eagle,” said the 29-year-old Singaporean.

Slorach, who started the tournament without any practice rounds, recorded a career-best finish on the Asian Tour last week and claimed his first professional title on his local circuit on Wednesday.

“I am feeling comfortable with my game right now. I have been working hard on my game and I have seen some good results over the past few months so I will just continue to do what I have been doing,” added Slorach.