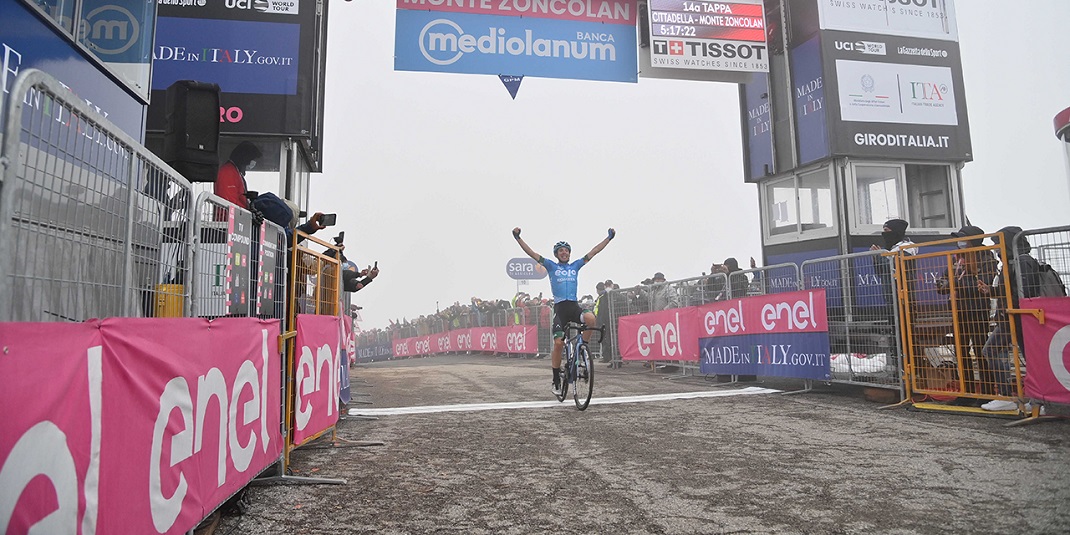 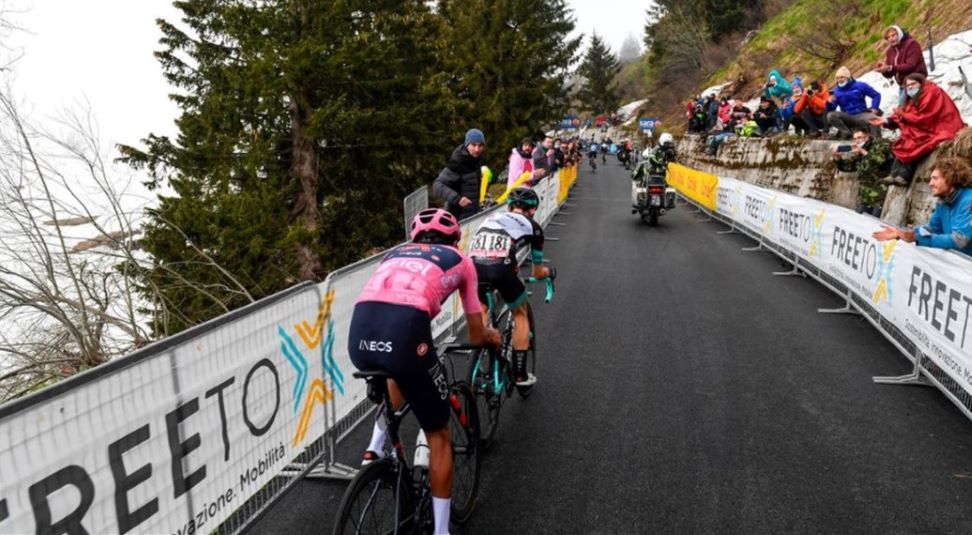 Lorenzo Fortunato, whose names means “lucky”, claimed an emotional solo victory, the first of his career at the age of 25, atop Monte Zoncolan after he rode away from an 11-man front group. On his way to victory, Fortunato caught Jan Tratnik, who accelerated with 10km to go, then continued alone in the last 3 kilometres – the steepest and most spectacular part of the iconic climb in the Friuli region.

Tratnik and Alessandro Covi rounded out the podium on Stage 14. Astana pulled the peloton along at the front for most of the race but Aleksandr Vlasov was unable to follow Simon Yates in its finale, who took advantage of the difficult final 3km with an effective attack. Race leader Egan Bernal stayed quietly on the wheel of the Englishman before in turn attacking him in the last few hundred meters to extend his lead over all of his rivals.

Quotes from the Stage winner and the Maglia Rosa

It was the 7th stage finish atop Monte Zoncolan. Italians now have the majority of the stage wins here (Gilberto Simoni in 2003 and 2007, Ivan Basso in 2010 and Lorenzo Fortunato in 2021). Other stage winners on the climb have been Spain’s Igor Anton (2011), Australia’s Michael Rogers (2014) and the United Kingdom’s Chris Froome (2018).

Speaking at the press conference, the stage winner Lorenzo Fortunato said: “Today, [former skiing star] Alberto Tomba who lives in the same town as me, Castel dei Britti, was watching the stage at my family’s house with my dad. They’re extremely happy. I’d also like to thank the whole staff of Eolo-Kometa. That includes Ivan Basso and Alberto Contador who have won everything – Ivan won here atop the Zoncolan. This morning, he told me: you make you the break, you attack on the Zoncolan and you win. So I did. But he believed in me more than I did! From today on, we’ll grow and progress, the team as much as myself. I’d never ridden the Zoncolan before but I’ve always seen it as an iconic climb. It’s wonderful to win here.”

The Maglia Rosa Egan Bernal said: “For sure, Astana wanted to win the stage. They even asked us if we wanted that too but we answered that we’d be happy if the breakaway were to stay ahead. They did a nice stage and they pulled very hard. The downhill was very technical and there were very few riders left at the front. Astana did well trying to win the stage and having faith in [Aleksandr] Vlasov. I always said I had more rivals than the guy in second place behind me. It was Remco [Evenepoel], then Vlasov and now it’s Simon Yates. I expected Yates to do so something today. It was a very good stage for him. He looked strong. I’m sure he’ll remain one of the strongest. I’m happy I managed to follow him today.”