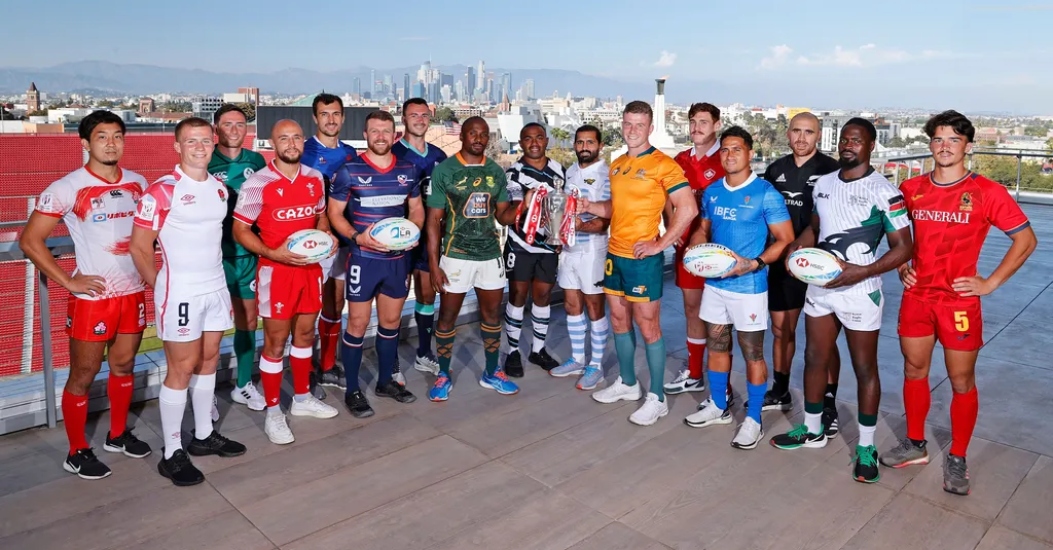 The action kicks off on Saturday at 09:20 local time (GMT-7) when hosts USA take on South Africa

The 16 team captains lined-up at the famous LA Memorial Coliseum – scene of the 1984 Olympic Games – on Wednesday ahead of the grand finale of the men’s HSBC World Rugby Sevens Series 2022 as the race to the title comes to a conclusion this weekend.

Four captains have one hand on the Series trophy as South Africa, Australia, Argentina and Fiji are all in with a chance of clinching the Series title at the HSBC LA Sevens, which takes place at Dignity Health Sports Park on 27-28 August.

That means South Africa, who won the first four tournaments of the 2022 Series, currently lead the way on 124 points and would claim the Series title should they reach the final in LA, meanwhile Australia are two points behind and Argentina a further four adrift.

Fiji are fourth on 104 points but the system in place in 2022 ensures that they retain a shot at claiming a fifth men’s Series crown despite missing the tournaments in Malaga and Seville at the start of the year.

South Africa arrived in LA in confident mood, fresh from their victory at the recent Commonwealth Games in England. The Blitzboks face New Zealand, hosts USA and Canada in a tough looking Pool B.

Their closest title challengers Australia and Argentina are paired together in Pool A alongside Spain and Japan.

Double Olympic Champions Fiji are in Pool C against Ireland, France and Wales. Pool D is made up of Samoa, England, Scotland and Kenya.

South Africa captain Siviwe Soyizwapi said: “We have to keep our own standards and not worry about our opponents. We had an up and down season, but we learned from all those mishaps and came back stronger. This is one more go and another opportunity to finish the season the way we started it way back in Dubai. We know what the level is to win tournaments, it is now up to us to make sure we reach that this weekend.”

“We want to make sure the focus remains in the right areas as we have learned from mistakes made. There is a tough weekend awaiting us, but that is how we prefer it – we are at our best when things are tough.”

“Canada have been playing good rugby all series, the USA will feed off the energy from their home crowd and will be pumped up, and New Zealand have always been a great rival, so all three pool matches will challenge us. We just need to ensure we have the consistency from the start and the rest will follow.”

Australia Sevens coach John Manenti said: “The Aussie men have never won the World Rugby Sevens Series – so this is a rare occasion for the squad.

“You never know how many chances you will get in your career to achieve something like this, so everyone is determined to really go out there and take the opportunity.

“On the back of the women’s success in winning the World Series, the men are motivated and keen to emulate their performance and make it a rare double for any sevens national teams.”

The action gets under way on Saturday at 09:20 local time (GMT-7) when hosts USA take on South Africa in what promises to be one of the matches of the day as fans are encouraged to arrive early.

Play begins on finals day on Sunday at 08:45 with the semi-finals at 14:09 and the gold medal final scheduled for 17:28, before the HSBC World Rugby Men’s Sevens Series 2022 Awards take place on Sunday evening.

Australia won the women’s Series which concluded in Toulouse in May. Australia were the dominant team throughout the 2022 Series, showing great consistency to win four gold, one silver and one bronze medals from the six rounds of the competition.

The year 2022 is a huge one for rugby sevens, following the grand finale of the men’s Series in Los Angeles, all eyes will turn to Cape Town, South Africa for what promises to be a spectacular and record-breaking Rugby World Cup Sevens 2022 on 9-11 September.

Los Angeles will host the 2028 Olympic Games, which will see rugby sevens’ fourth appearance at the Games since the sport’s debut at the Rio 2016 Games.

Remaining tickets for the HSBC LA Sevens are available at https://lasevensrugby.com/tickets.