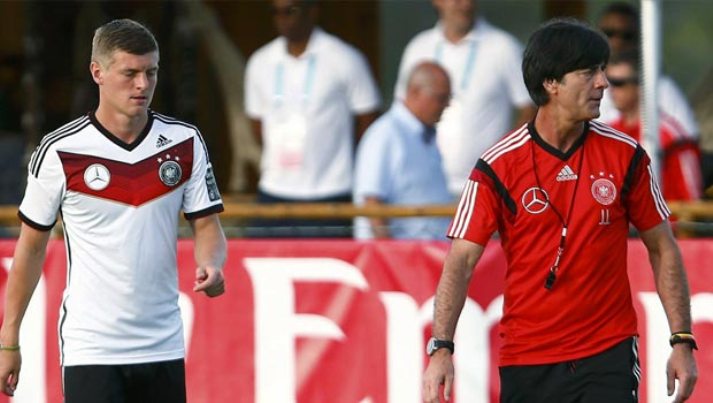 Germany’s Jerome Boateng and Toni Kroos insist previous failures against Italy will count for nothing when die Mannschaft square off against the Azzurri in Saturday’s Euro 2016 quarter-final.

Antonio Conte’s Italy underlined their growing stature at the European Championship finals by knocking out holders Spain with a 2-0 win in the last 16.

The Azzurri won Group E, outclassing Belgium 2-0 in the process, then swept Spain aside on Monday to face Germany in Bordeaux for a semi-final place.

The Germans are the only team yet to concede a goal at Euro 2016 and the world champions brushed aside Slovakia 3-0 in the last 16.

But the Italians will be a step up for Joachim Loew’s Germany, who have never beaten Italy in eight previous attempts at a major tournament.

Germany crashed to a 2-1 defeat to Italy in the Euro 2012 semi-finals.

But die Mannschaft romped to a 4-1 friendly win over the Azzurri in March and Loew said Tuesday that the Germans have no “Italian trauma”.

Kroos was equally dismissive when a reporter used the expression to ask about Germany’s eight previous failures on the big stage.

There is plenty of respect in the German camp for Italy, but no fear of the Azzurri, he said.

“Why should I have an ‘Italian trauma’? You’ll have to explain that to me first,” asked the Real Madrid midfielder who scored against Italy in March.

“I haven’t played that often against Italy, so previous matches were nothing to do with me.

“They are hard to play against, stand deep and are very relaxed on the ball, they’ve played like that for years.

“Italy will be the strongest team we have faced until now. I’m looking forward to it and I’m very optimistic.”

Centre-back Boateng was equally as dismissive of history being a factor in Bordeaux and is relishing the challenge.

“No, there are definitely worse things than playing against Italy,” said the defender.

Germany’s team manager Oliver Bierhoff described Italy as “the toughest obstacle we could have wished for” in their quest to reach the last four.

“There’s no fear, but we have the highest respect,” said Bierhoff.

Kroos says the way Italy dealt with Spain, European champions in both 2008 and 2012, shows how good the current Azzurri team is.

Giorgio Chiellini’s first-half goal put Italy ahead at the Stade de France before Southampton striker Pelle added the second in the 91st minute to send Spain crashing out.

“The manner in which the Italians beat Spain was very impressive,” added Kroos.

“Especially when you think that Spain were one of the pre-tournament favourites.

“As has already been said, it’s going to be a very difficult game for us.” – Agence France-Presse