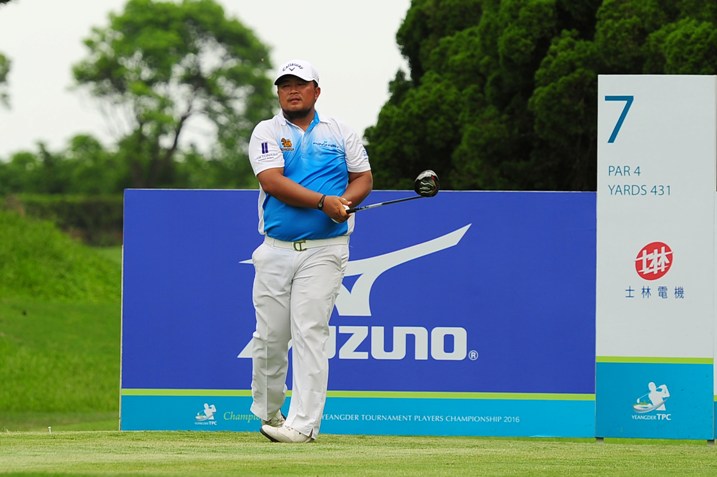 Thailand’s Namchok Tantipokhakul got the lead he deserved after firing a seven-under-par 65 to share the opening round honours with Spain’s Javi Colomo at the Yeangder Tournament Players Championship on Thursday.

Colomo also enjoyed an encouraging start to the week after he traded eight birdies against a lone bogey to find himself occupying prime position with Namchok.

Thailand’s Pariya Junhasavasdikul, who set the early pace in the morning, posted a 66 to share third place with Spain’s Carlos Pigem at the Linkou International Golf and Country Club.

Philippines’ Miguel Tabuena returned with a 67 to grab a share of fifth place with Casey O’Toole of the United States at the US$500,000 event, which is also the final Olympic qualifying event on the Asian Tour.

Namchok was clearly the man to catch when he flew off the blocks with two birdies in his opening three holes on the back-nine 10th.

He soared further ahead with a pair of eagles on the 18th and first holes before stretching his advantage further with birdies on holes three and four.

A lone bogey five on seven eventually brought his charge to a halt but he would par the last two holes for an inward 33.

“My driving accuracy was spot on today and I didn’t make many mistakes apart from that bogey on seven. This is a very challenging golf course especially the greens which you have to learn to read them well.

“I managed to do that today and it showed on my card. I’m just going out there to enjoy myself again like what I did today and hopefully I’ll be back smiling again,” said Namchok.

Colomo was also a man on fire as he charged out with an outward 33. The Spaniard then stormed ahead with four birdies in his next five holes after the turn.

He dropped a shot on six before making amends with another birdie on eight.

“All in all, it was a good day. The conditions were good and I didn’t make much mistakes today. The greens are tough to read but I managed to do pretty okay except maybe on the sixth hole where I made my only bogey for the day.

“Apart from that, everything is good and for tomorrow, I’m just going out there to enjoy my game like what I did today,” said Colomo.

Pariya, whose last victory on the Asian Tour dated back to 2013, mixed six birdies, two bogeys and an eagle to enjoy a brief lead after the morning rounds.

The Thai has only made the cut thrice in eight starts but a solid round of 66 has brought about renewed hope as he attempts to end a three-year title drought on the Asian Tour.

The two-time Asian Tour winner was almost flawless in his tee and approach shots and is hoping for his putter to work and complete his overall strategy for the week.

“It has been a while since I gave an interview after a round. It’s good to be in this position. I’m playing well. My driver and irons are spot on. I missed a few putts and a couple of birdie chances but I made it up with an eagle on four.

“I’ll try to keep it up again as my ball striking is there and if my putter can cooperate a little more, I’ll be in for a good chance,” said Pariya.

O’Toole is hoping his promising start at the Yeangder TPC will not be a flash in the pan.

The 25-year-old American enjoyed a stellar season on the secondary Asian Development Tour (ADT) where he was crowned the ADT champion.

However, he has not be able to replicate his winning form with only a tied-fifth finish in Myanmar as his best showing so far.

“To be honest, I’ve not been playing well these past couple of months. This is one of my lowest rounds so far and I’m definitely happy with how I’ve played.

“I thought I did a lot of things which were really good. Nothing really spectacular but just played a really solid round of golf. Hopefully it’s not a fluke and I can continue to do well,” said O’Toole.

Leading Scores after round 1 of the Yeangder TPC 2016 being played at the par 72, 7108 Yards Linkou GcC course (am – denotes amateur):