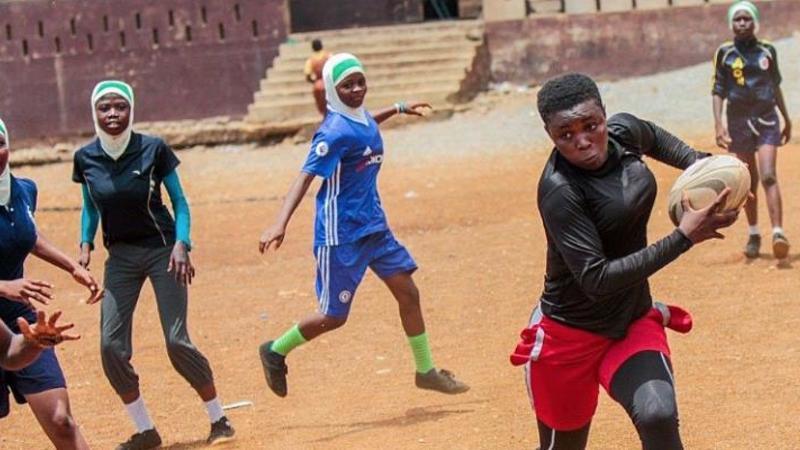 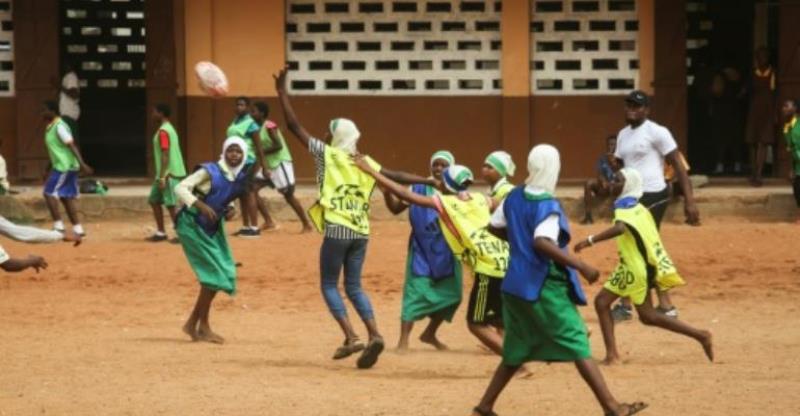 Some of the girls wear hijabs, others are barefoot and the sandy pitch is marked out in charcoal. But the 14 players could be Ghana’s rugby stars of the future.

One of them, Maimuna Dawda, used to watch matches on television before she got the chance to hold the oval ball for herself in 2016.

Now, the 14-year-old plays three games of short-format seven-a-side every week at the Kanda Cluster of Schools that she attends in the capital, Accra.

In places like Ghana, where society is still overwhelmingly male-dominated and gender roles remain traditionally assigned, rugby — where it’s played — is seen as a man’s game.

But Dawda wants to prove otherwise and represent her country at the highest level.

“I want to play in a national team and be the best rugbyplayer for Ghana,” she told AFP on the sidelines of a schools sevens tournament.

Watching the students from the touchline is Rafatu Inusah, who has been playing rugby since 2009 and was one of the first women in Ghana to do so.

She now works for the Ghana Rugby Football Union (GRFU) as a development officer, helping to implement global governing body World Rugby‘s “Get Into Rugby” programme.

The scheme is designed to increase the number of players, coaches and referees across the world and is helping the sport to reach more countries than ever before.

Like some of the girls she trains, Inusah, 28, also wears a hijab when she plays and laughs at the idea that Muslim women can’t play the sport.

In fact, she said she specifically targets Muslim girls.

“I decided to go into the Islamic school in order to change that perception they have when you are playing rugby (that) ‘rugby is not for ladies or girls to play’,” she said.

Ghana is a member of Rugby Africa, one of the six regional associations of World Rugby, which organises games the length and breadth of the continent.

In 2016, nearly 400,000 African boys and girls took part in development programmes while just over 770,000 men, women and children played the sport.

At the last Olympics in 2016, established rugby giants South Africa and relative newcomers Kenya represented the continent at sevens, which was included at the Games for the first time.

The Springboks won bronze behind Great Britain who were beaten in the final by Fiji. Kenya — Africa Cup Sevens champions in 2013 and 2015 — placed 11th out of 12.

The president of the GRFU, Herbert Mensah, believes Ghana — a country better known for the exploits of its international footballers, the Black Stars — could become a new challenger.

He said his job often seemed to be “trying to do the impossible” but he wants the sport to be as inclusive and as accessible as possible.

One idea to increase participation is touch rugby on the streets, using the open drains on either side as natural touchlines.

“Gutter to gutter allows them to throw the ball and run in a straight line,” explained Mensah.

“If you don’t run in a straight line you end up in a gutter. Try to get fancy and you lacerate your face,” he says with a laugh.

According to World Rugby, there were some 8.5 million registered and non-registered players in 121 countries across the world in 2016.

But over half of them were in just nine countries — the Six Nations of England, Scotland, Wales, Ireland, France and Italy; South Africa; Australia; and New Zealand.

Yet, the country already has a national team — and even its own version of the haka, the traditional Maori war cry performed by New Zealand’s All Blacks before internationals.

The Ghana Eagles in October last year played in the Africa Cup Sevens Tournament held in Uganda’s capital, Kampala, and placed a creditable ninth out of 10.

Just months after becoming a full member of World Rugby, it also won its group in the Rugby Africa regional challenge event — the lowest tier of the sport on the continent.

That has taken the country into the third tier Bronze Cup for the men’s 15s in May this year, while they will try to improve on last year’s Africa Cup performance in October.

Longer term, the plan is to target the Olympics and World Cup.

“In five or seven years, I think we will be one of the best sevens sides in the world,” Mensah predicted.

“Now we have got to get the new group of younger players coming through who are 10, 11, 12 now, who will have learnt how to play the game from a very young age.” – Agence France-Presse