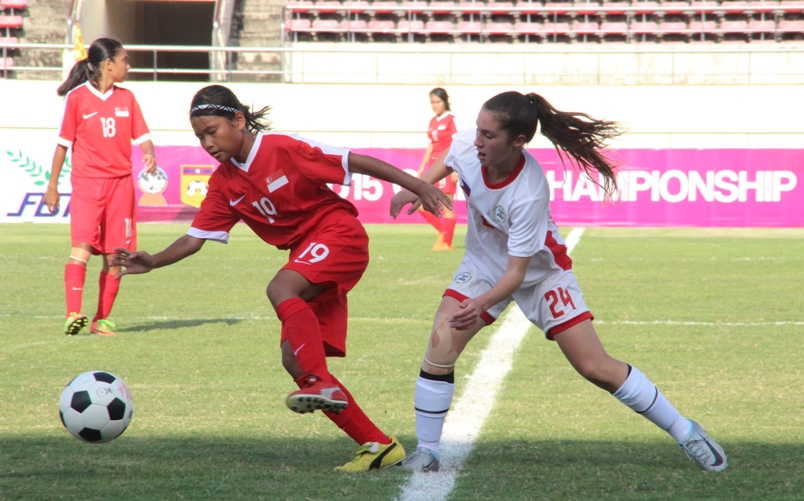 Philippines confirmed their arrival into the semi-finals of the AFF Under-15 Girls’ Championship as group winners when they whitewashed Singapore 3-0 to maintain their perfect record of three wins from three matches.

But what made the win for the Philippines girls more outstanding was the fact that they did not concede a single goal enroute to their passage to the next round.

“We are of course very happy to make the semi-finals as we have met our initial target of winning all our matches,” said Philippines head coach Marielled Benitez.

“There are some things which we need to work on obviously, where the finishing still needs some polishing.”

The pressure was always going to be on Singapore to deliver against one of the best organised teams in the competition this year.

But with the likes of Dorcas Chu and Putri Nur Syaliza Sazali a little off colour on the day, it allowed the Philippines more possession and space to push the ball around.

And it did not take them too long to get on the score sheet when Arianna Lepage banged in a 10th minute cross from Kassandra Kalamea.

In full control and with no danger of losing the battle at the centre of the park ably commanded by the lanky Myria Garcia, the Philippines came at the Singapore defence three minutes later but the attempt from Alexander Yap was saved by keeper Azura  Azlan.

The best that Singapore could muster was a defensive lapse on the part of the Philippines defence in the 35th minute but with only the goalkeeper to beat, striker Danelle Tan just could not find the finishing touch.

Philippines continued their dominance into the second half and with several chances missing the intended target, it was only in the 62nd minute that they were able to add to the score line with Myria heading in the cross from Yap.

Five minutes later, the Philippines completed and celebrated their comprehensive victory with a dipping shot from Cera Mendoza to beat Azura Azlan for the third time on the day. 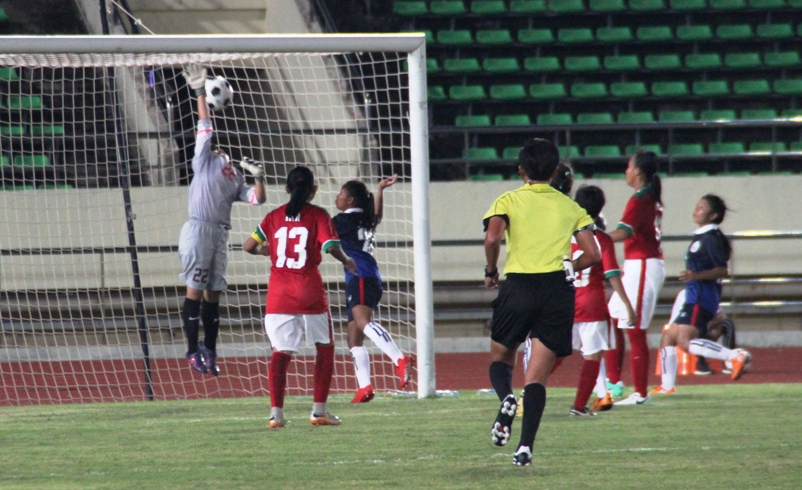 In the meantime, Cambodia were playing without any pressure against bottom side Indonesia following the defeat suffered by their nearest rivals Singapore.

They needed only to draw the game to confirm their passage into the next round and as such, were taking things a little easy as they let Indonesia more of the run of the game at the start.

The Indonesians, eager to prove their detractors wrong, were a lot more organised in the hope that a comprehensive win over Cambodia would get them a place into the next round.

But while they have the midfield presence, they were lacking the strikeforce to make all their chances count. Striker Carla Pattinasarany while has the height and also the skill, just lacked the pace.

And with their failure to move forward enough, it was Cambodia who had the first real chance in the game but the shot from Vey Sretouch hit the side netting instead.

In the 32nd minute, Cambodian finally broke the deadlock with a well-taken freekick from Ti Samnang that was beyond the reach of Rabiah Khodijah.

Indonesia’s best effort came with just a minute remaining of the first half with a lob from Nur Fadillah Ramadhani which forced an outstretched save from Poeum Kunthea.

The battle continued all the way into the second half with both teams unable to make their chances count as Ti rocked the Indonesian crossbar while Nom Minea’s grounder on 74 minute was ably saved by Rabiah.

But as the game seems to be head in Cambodia’s favour, Carla finally paid the faith of her coaches by evading her markers before chipping the ball over Poeum and trickle into goal for the hard earned equaliser and their very first point of the competition.

“Now that we are in the semi-finals, we have a lot of work to do. We really need to be better,” added Cambodian head coach Meas Sam Oeum.