Home News GIRLS’ U15: Down to the wire for Myanmar and Laos 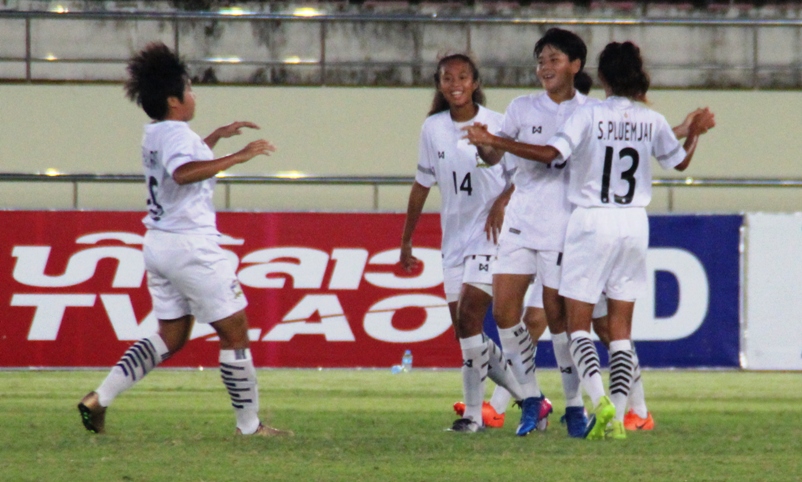 With Thailand already through to the semi-finals of the AFF Under-15 Girls’ Championship after winning Group A in style today, the battle for the runners-up will now go down to the wire between Myanmar and Laos.

As expected, the Thais won the group after picking up the full 12 points from four matches played where this evening, they sidestepped hosts Laos with a comprehensive 3-0 beating.

Laos were expected to give at least a token resistance against a confident Thai side but that never materialised as the latter were full of vigour and took control right from the onset.

They never really looked back as they forced Laos to put all available girls behind the ball as they defended in numbers to make clearance after clearance.

With reserve goalkeeper Phetlavanh Xaiyaphetdala starting between the posts, it gave some confidence to the Laos backline but in the end, they just could not fend off the persistence onslaught.

The first goal came in the 16th minute with Suchada Khamjaroen firing in a dipping shot from some 20metres out that sailed to the far post well beyond the reach of an outstretched Phetlavanh.

Three minutes later, Laos fell further behind when Suchada dribbled through the opponent’s defence before unleashing a stiff grounder to beat Phetlavanh.

Laos never really troubled the Thai backline as lanky midfielder Thanakon Phonkam was in full control alongside defender Thadarat Podthong in command at the heart of defence.

With Laos faltering as the game wore on, an own goal from defender Pe Pe completed the mission for Thailand as they emerged group winners.

For Laos, they will now need to win their last game in the group against Vietnam in two days, for them to make the next round while at the same time they will also be hoping that Malaysia do them a favour and beat Myanmar.

Myanmar are on six points while Laos are on three points after three matches played. 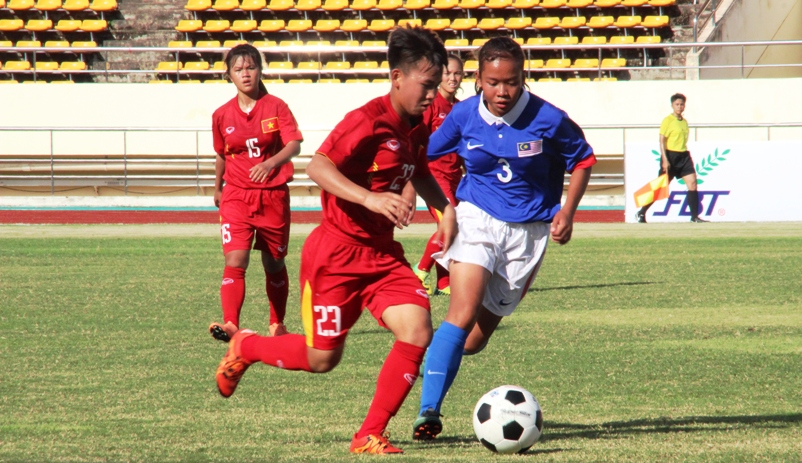 In the meantime, Vietnam picked up their first full points of the competition when they edged Malaysia 2-1 in a match which has no real bearings.

Both Vietnam and Malaysia are already out of contention for a place in the semi-finals.

And this afternoon, while Malaysia were still enthusiastic about the game, the Vietnam girls were still reeling from their loss to Myanmar in their last match which saw their exit from continuing further this year.

With the sun coming out after a heavy downpour, both sets of players were struggling to push forward but a mistake in the Malaysian backline early in the third minute, allowed Tran Thi Thu Xuan to score off a cross from Hoang Thi My Hang.

The game fell into doldrum soon after as the action were restricted to the centre of the park, up until the 32nd minute when Vietnam defender Trinh Thi Thuy Linh was penalised for felling midfielder Ayuna Lamsin inside the box.

Henrietta Justine did not disappoint from the spot when she blasted the ball to the left of Vietnam keeper Dao Thi Kieu Oanh.

Into the second half, the game came alive late in the 69th minute but before striker Thanh Hao managed to get a shot it, Malaysian keeper Siti Noor Maslinah Asiruddin threw herself in front of the ball for the block.

But a minute later, Siti Noor could prevent Vietnam from clinching the winner when Thanh Hao ran past her marker to slip the ball in for what was the winner.

The Malaysian girls tried hard to get the equaliser they so needed but they just could not get find their way through a stubborn Vietnam defence.