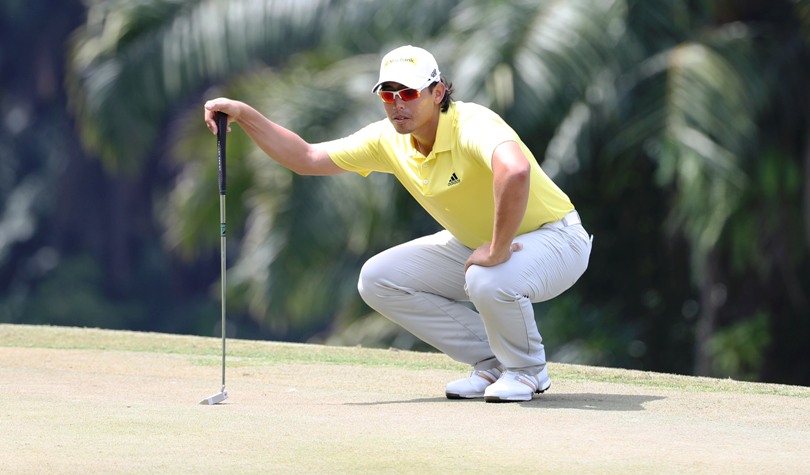 Gavin Green’s runner-up finish at the Hero Indian Open on Sunday is a sign of better things to come in his young career.

The Malaysian has gone through the highs and lows since turning professional in 2015 but the result in India is likely to be the catalyst in his rise on the Asian Tour.

Ranked 12th in the world amateur rankings before joining the play-for-pay ranks, Green missed out on an Asian Tour card at the 2016 Qualifying School and predominantly focused on the Asian Development Tour (ADT), the secondary circuit of the Asian Tour.

The experience of playing on the ADT was a huge turning point in Green’s career as he won twice and finished second on the Order of Merit to earn playing rights on the 2017 Asian Tour season.

The 23-year-old admits it has been a long and arduous journey. “It’s been a long road but I’ve come super far. From not having any status when I turned professional and played six months on invites, went to Qualifying school and missed Qualifying School and then got onto the ADT and finished second there.

“Now, I’m here and I’m really thankful. I’ve got a great team behind me, my coach in Dallas, my parents and my management team, they’ve put in the good work and it’s paying off,” said Green.

The result at the Hero Indian Open came with a cool pay cheque of US$194,440 which pushed him to fourth place on the Order of Merit and sealed his Asian Tour card for 2018. He also moved to 234th on the Official World Golf Ranking from his previous position of 365.

“I’ve got no more pressure for me and it’s a huge improvement from my point of view as I’ve been struggling to play in the weekend. I just haven’t been able to finish it. To finish second in such a big event is such a huge thing.

The Malaysian’s performance in India also captured the attention of Olympic Gold medalist Justin Rose, who like Green, is managed by Excel Sports Management. Rose tweeted, “Brilliant second place @gavingreen93 on the @EuropeanTour.”

Green is among seven players inside the top-10 on the Asian Tour Order of Merit still in their 20s while Phachara Khongwatmai of Thailand, ranked third, is only 17.

Man of the moment S.S.P. Chawrasia, who dominated the Hero Indian Open to win the title for the second successive year, moved to second place on the Order of Merit with earnings of US$301,323.

He trails the Merit leader David Lipsky of the United States by slightly over US$30,000 while Phachara has earned US$251,722. Green sits in fourth place on US$213,827 followed by Thai veteran Prayad Marksaeng in fifth place on US$191,812.

The Asian Tour will next travel to Japan for the Panasonic Open Japan staged at the Chiba Country Club from April 20 to 23. The event will offer a prize purse of Yen 150 million (approximately US$1.27 million) and sanctioned by the Asian Tour and Japan Golf Tour.

Pos  Player Order of Merit (US$)