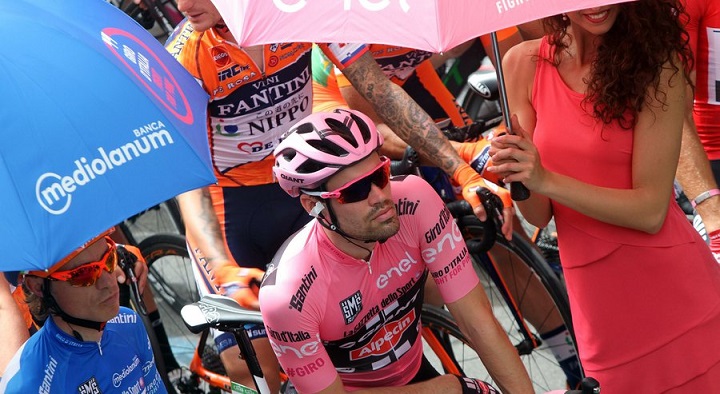 Germany’s Andre Greipel powered to victory on the fifth stage of the Giro d’Italia on Wednesday, a bunch sprint finish that left Dutchman Tom Dumoulin in the race leader’s pink jersey.

But after a ferocious sprint to the finish of the 233km stage from Praia a Mare in Calabria, Greipel, known as the ‘Gorilla’ for his impressive physique, followed his victory roar by crumbling on the roadside as he tried to recover from his efforts.

Afterwards, Greipel said the hard chase to reel in a group of late attacks had added extra weight to his team’s workload.

“It was a really hard chase to bring the four breakaway riders back,” said Greipel. “Luckily other teams helped but I owe a big thanks to my team. They are a big part of this success.

“Before the start, I said it would be a nice finish for me and it really was. I was behind the crash [involving Rein Taaramae] but I found my way through and launched my sprint when I saw a gap with 300 metres to go.

“I hesitated a bit, then I gave it everything. I’m really happy.”

Dumoulin, who races for Giant, took the pink jersey after his time-trial win on the opening stage and reclaimed it on Tuesday when he finished second behind Lampre’s Diego Ulissi on stage four.

The Dutchman will wear it going into Thursday’s sixth stage, one of several in the medium mountains that should see the sprinters dropping to the back of the pack.

Prior to this year’s 99th edition, Dumoulin played down suggestions he is among the contenders for overall victory in Turin on May 29, owing to the fact he is looking to peak in time for the Rio Olympics later this summer.

And less than a week into his race debut, he admitted: “I was told the Giro is a difficult race. Now I know why. Today it was up and down all day and the peloton went crazy in the finale.”

Dumoulin is expected to defend his race lead on Thursday’s sixth stage, but the comparatively short 157km race from Ponte to Roccaraso features the race’s first mountaintop finish and could see the first skirmishes between race favourite Vincenzo Nibali (Astana) and Alejandro Valverde (Movistar), as well as the climbers looking to loosen Damiano Cunego’s grip on the King of the Mountains blue jersey.

Leading results from the fifth stage of the 2016 Giro d’Italia, a 233km route from Praia a Mare to Benevento on Wednesday: