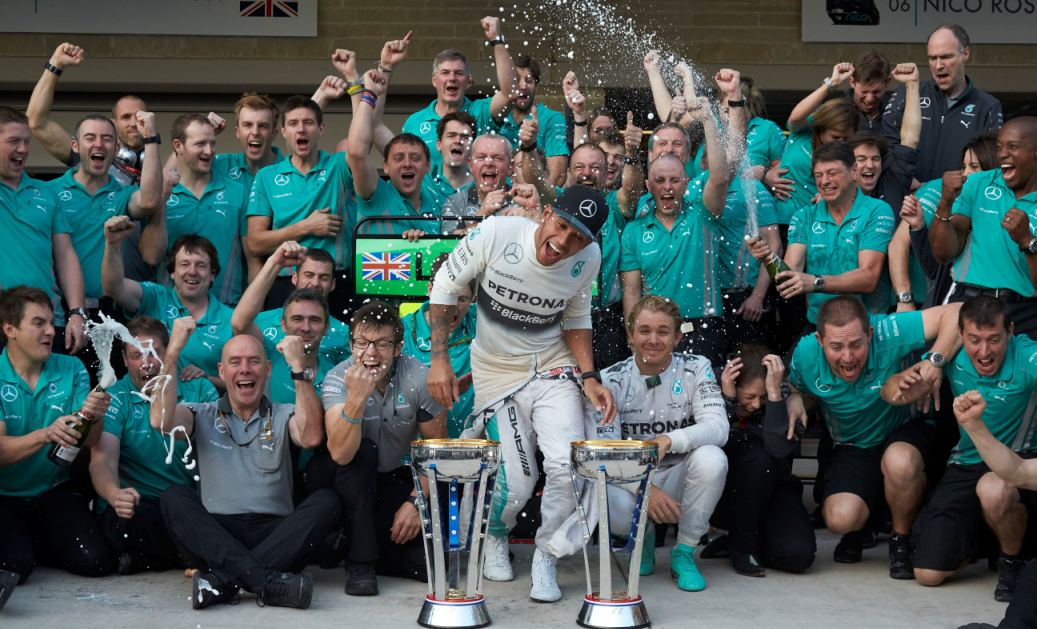 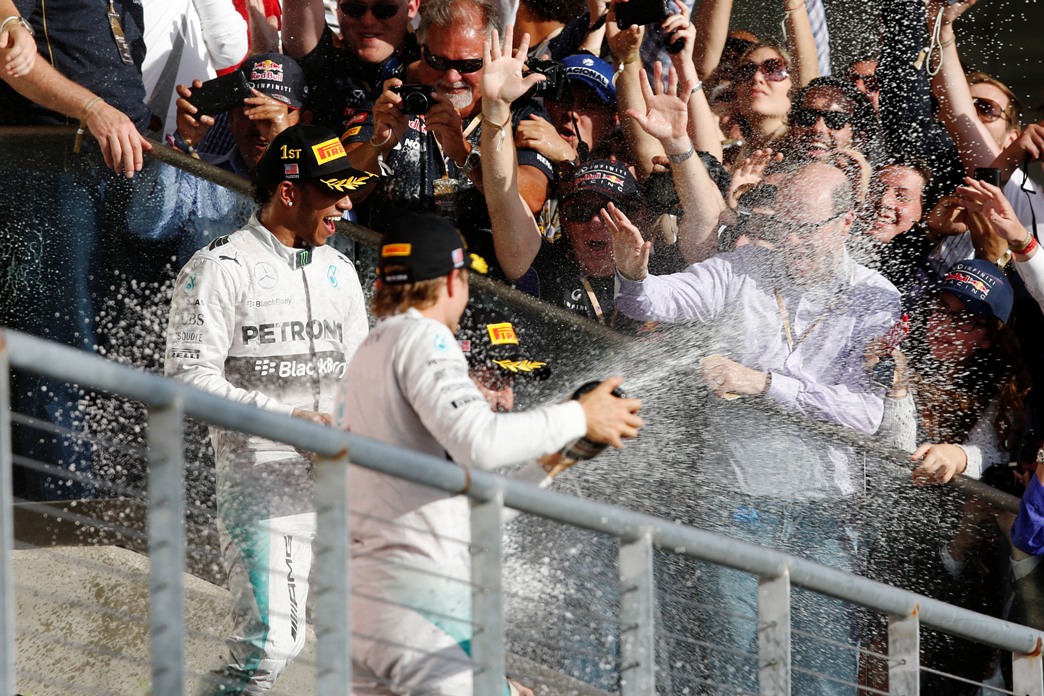 The 29-year-old Englishman, who took his first title in 2008 with McLaren, won not only the 55-laps race, but also his private duel with Mercedes team-mate Nico Rosberg, who suffered prolonged problems with his car after making a poor start from pole position.

Having started from the prime spot on the grid for the 11th time this year, Rosberg was comprehensively outpaced immediately as Hamilton surged clear to control the race with a well-judged and dominant performance.

Hamilton’s victory was his 11th of the season and the 33rd of his record-breaking career and secured a record 16th victory of the season for the Mercedes team.

As Hamilton roared his delight – “Whoooah world champion – Oh my God, cannot believe it – thanks everyone” – Prince Harry responded on team radio. “Thank you very much Lewis for not letting the British public down, you are a legend.”

Hamilton became the fourth British driver to win more than one championship, joining Jackie Stewart, Jim Clark and Graham Hill, the last man to succeed in 1968.

Hamilton came home 2.5 seconds clear of second placed Felipe Massa of Williams and his team-mate Valterri Bottas, who was third.

Daniel Ricciardo was fourth for Red Bull ahead of Briton Jenson Button in what may be his last race with McLaren, Nico Hulkenberg and his Force India team-mate Sergio Perez.

Four-time world champion Sebastian Vettel finished eighth in his final race with Red Bull, one position ahead of the man he replaces at Ferrari next season, Fernando Alonso and Kimi Raikkonen in the second Ferrari.

Rosberg struggled with a series of problems that hampered his performance, but refused to retire when offered a chance to pit with two laps remaining.

“I’d like to go to the end,” said an emotional Rosberg, who knew his fate when he was lapped at the end.

Rosberg, showing great sportsmanship and dignity in defeat, went to the pre-podium room to embrace and congratulate Hamilton, a gesture that spoke volumes for their rivalry.

After a tense hour of official preliminaries, the race began under a setting sun with a track temperature of 33 degrees Celsius and an air temperature of 26 degrees.

As the lights went out, Hamilton delivered a dream start, his car accelerating alongside Rosberg’s and then pulling away to secure the lead as they headed into Turn One.

Rosberg, on pole, simply could not cope with the Englishman’s remarkable pace and smooth adhesion as he created a clear gap as they raced towards the hairpin.

By the end of the opening lap, Hamilton had a lead of 1.2 seconds and looked comfortable, leaving Rosberg with the problem of finding a solution to a personal nightmare scenario for him.

Hamilton’s initial success was his first, in beating his team-mate off the grid from second place, in seven races since the Belgian race, where their relationship hit its lowest point following a collision that prompted acrimonious accusations.

Hamilton continued to set the pace with aplomb.

Adter pit stops Massa was left out in front by more than 15 seconds, a lead he retained until he pitted on lap 13, Hamilton regaining control with an advantage of 2.3 seconds over Rosberg.

Rosberg’s problems intensified when he ran off the track on lap 23, and he slipped further back when he suffered an Energy Recovery System (ERS) failure.

By lap 30, Hamilton led Massa by only nine seconds, suggesting the Briton was slowing down, managing a possible engine problem, before he pitted for a second time on lap 31.

This gave Massa the lead, again, as Hamilton re-joined second, about 14 seconds adrift, with Bottas third and Rosberg back in fourth before he pitted again on lap 34.

The German’s car problems required a manual departure from the pits after a 4.8 seconds stop and he rejoined seventh, knowing that if Hamilton was to retire, he must finish in the top five.

Rosberg’s agonies were relayed to the world by team radio on lap 37 when he asked about his position.

“It’s not good at the moment,” came the reply.

“What the hell does that mean? What can I do?” said Rosberg.

After 40 laps, Massa led by 14.2 seconds ahead of Hamilton, with Ricciardo third, Bottas fourth and the luckless Rosberg down in eighth.

But Massa had to pit again and did so on lap 44, rejoining second, 10.8 seconds behind Hamilton, who cruised to victory, and his second title. – Agence France-Presse