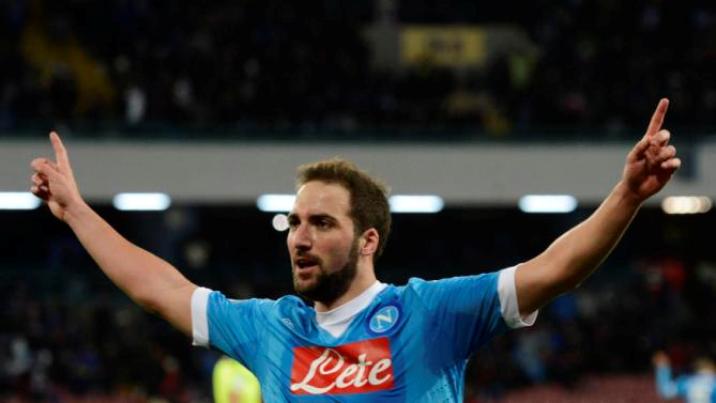 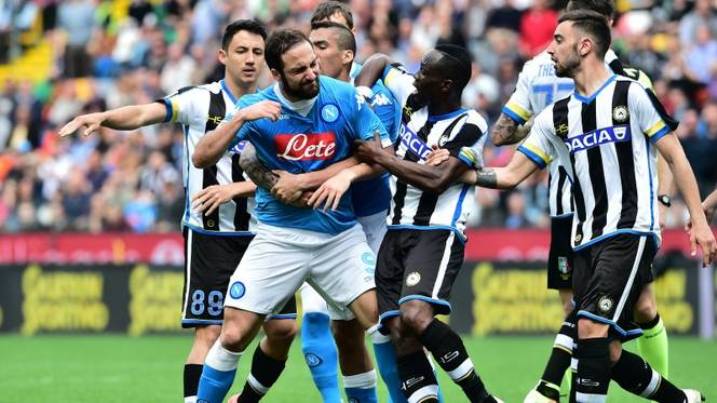 Gonzalo Higuain hit his 30th Serie A goal then saw red as Napoli’s hopes of a first title in 26 years were dealt a blow in a bad-tempered 3-1 defeat to Udinese.

Napoli, who last won the title when Diego Maradona played his penultimate season at the club in 1990, were left with a six-point deficit to Juventus after the champions’ 1-0 win over Empoli on Saturday.

Trailing 2-1 at half-time thanks to a Bruno Fernandes double which included a spot-kick and a spectacular overhead kick, Napoli failed to recover after falling behind to Cyril Thereau’s strike just before the hour.

Having seen coach Maurizio Sarri sent from the touchlines before the interval for protesting a second penalty award, Napoli suffered another blow when Higuain was given his marching orders in the final quarter hour.

After an angry exchange with the match referee, the Argentine striker had to be restrained by teammates as he tried to remonstrate with Udinese players.

If Napoli fail in their title bid on the final matchday on May 15, this loss will be seen as the turning point.

Napoli’s first reverse since a 1-0 defeat to Juventus two months ago leaves them second at six points behind four-time consecutive champions Juventus with seven games remaining.

Roma are away at Lazio in the capital derby later Sunday looking to close their seven-point gap to second place although defeat for Luciano Spalletti’s visitors would brighten the Champions League qualifying hopes of both Fiorentina and Inter Milan, who are five points further behind.

But Sarri was defiant: “We can’t take anything away from Udinese, they played great while we just never got to play at our usual level.

“The defeat will make us angry for a day or so, but it will also give us enough fuel for the next seven games.

“We’re having a great campaign. We have to pick ourselves up as soon as as possible.”

Adding to the pressure, Napoli were without injured ‘keeper Pepe Reina (calf) for a fixture they had not won at the Friuli since September 2007.

Udinese, despite their poor recent form, had Reina’s replacement, Gabriel, flapping in the Napoli net soon after kick-off — prior to which a minute’s applause was held and AC Milan legend Cesare Maldini, who died at the age of 84.

But coach Gigi De Canio affirmed: “We didn’t turn up here just to make up the numbers. It was a great performance against a top side, and one that should give us the belief that we can do it again.”

Senegal defender Kalidou Koulibaly was clumsy with his shoulder charge on Emmanuel Badu and after the referee pointed to the spot Fernandes stepped up to squirm a tame shot under the body of Gabriel.

Napoli were back on level terms soon after, Higuain hitting a crisp first-timer past Orestis Karnezis on 24 minutes after Jose Callejon’s drive was charged down.

But less than a minute later, Udinese earned another penalty when Silvan Widmer was tripped from behind by Faouzi Ghoulam.

This time, Gabriel blocked Fernandes’s poorly-hit shot but the save did not calm the nerves of Sarri, whose protestations on the touchlines prompted his expulsion.

Udinese remained a threat, Gabriel rushing out to punch at the feet of former Napoli striker Duvan Zapata after Badu’s overhead kick had sent the ball towards goal.

Zapata flashed a header wide following cross from Thereau soon after while at the other end Higuain fired over and Lorenzo Insigne skewed just wide of the near post.

Napoli were stunned on the stroke of half-time when a Gabriel’s poor control gave possession to Zapata, who twisted and turned before sending a cross over for Fernandes to fire an overhead kick into the empty net.

Gabriel was left stranded again although Napoli’s defence was primarily at fault 13 minutes after the restart when Thereau got between Raul Albiol and Elseid Hysaj a yard from goal to guide a cross from the right past the ‘keeper. – Agence France-Presse