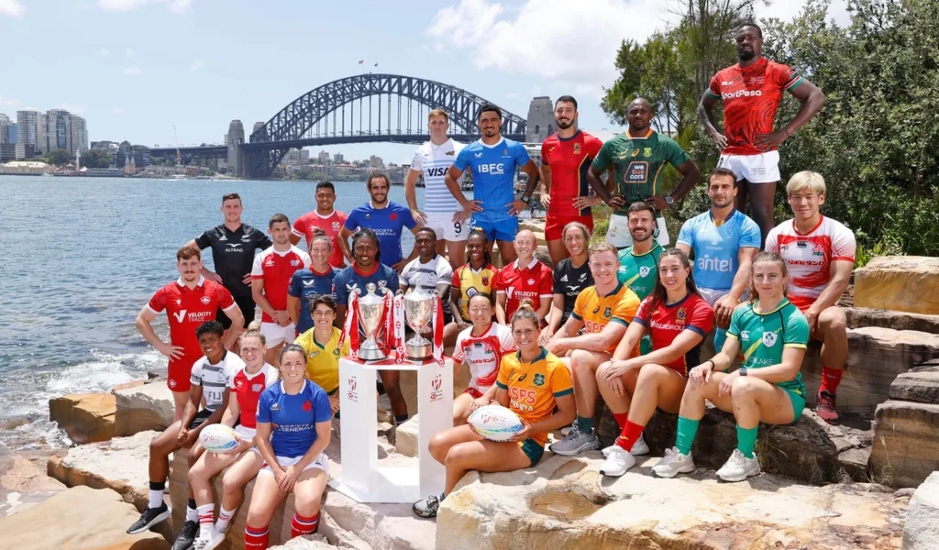 The world-famous Sydney Harbour Bridge provided the backdrop as captains of the 28 men’s and women’s teams gathered ahead of the HSBC Sydney Sevens which kicks off on Friday, 27 January.

The high speed, all action event continues on Saturday with the culmination of the pool phase and quarter-finals, before the semi-finals and finals on Sunday.

With the popular event returning to the city for the first time since 2020, Australia’s men’s and women’s teams will be looking to put on a show for their fans as they enter the field at the Allianz Stadium as reigning Series champions.

The 2023 Series is shaping up to be the most competitive in history with the prize of Olympic Games Paris 2024 qualification on offer for the top four women’s and men’s teams in the 2023 Series standings, while hosts France have pre-qualified for next year’s pinnacle event in the nation’s capital.

The men’s Series has seen four different gold medal winners (Argentina, Australia, Samoa and South Africa) in the four rounds to date while New Zealand, Australia and the USA have claimed all the medals in the first three rounds of the women’s competition.

In the men’s tournament in Sydney, Pool A sees Hamilton winners Argentina drawn with hosts Australia, Great Britain and Canada. Pool B is led by current Series leaders New Zealand, together with South Africa, Kenya and Uruguay. USA, Ireland, Samoa and Spain will compete in Pool C. Double Olympic champions Fiji will be looking to return to form and are in Pool D with France, invitational side Tonga and Japan.

The women’s pools see New Zealand paired with Japan, France and invitational side Papua New Guinea in Pool A. USA head a strong looking Pool B that includes Great Britain, Fiji and Canada. Hosts Australia are in Pool C together with Ireland, Spain and Brazil.

The action begins at 12:00 local time (GMT+11) on Friday, beginning three days of action-packed world-class rugby sevens, which concludes with the finals on Sunday evening.

Tickets for the HSBC Sydney Sevens are available from www.sydney7s.com.au/tickets.

Rugby sevens fans around the world can watch the action via live stream on World Rugby digital platforms including www.world.rugby, YouTube and Facebook in countries where there is no national broadcaster covering the event.