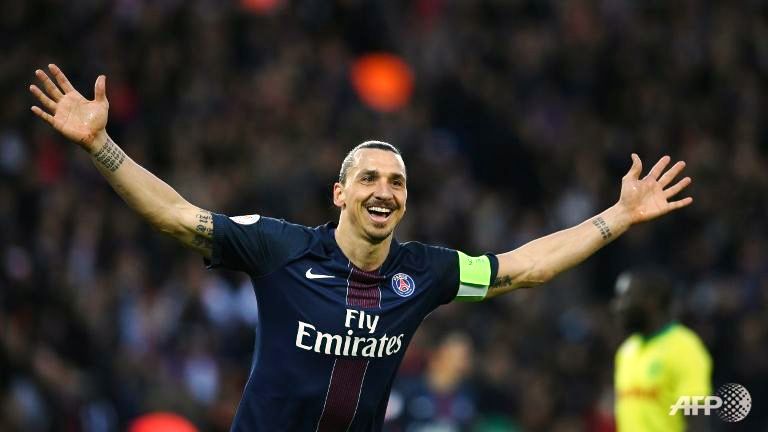 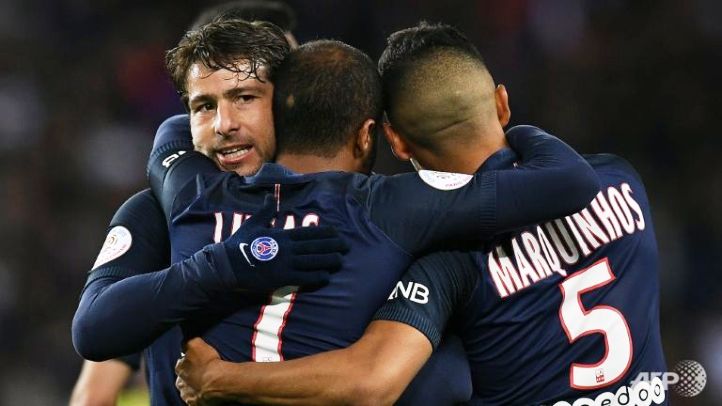 With the title long wrapped up and a French Cup final against bitter rivals Marseille to come a week later, the night was all about Ibrahimovic and his quest to break the 37-goal single season PSG record at the Parc des Princes.

Starting the game with 36 goals, the Swedish striker equalled the 1997-98 club record of Argentine Carlos Bianchi in the 18th minute with his 37th of the season.

Ibrahimovic then netted his record 38th a minute from time from Javier Pastore’s cross to end a match-long quest that had looked set to frustrate him.

“Thank you ‘Ibracadabra’, these four years will remain in my heart.”

It was the perfect end to his last match at the Parc in a PSG shirt before leaving for pastures new and he was immediately substituted, but not before his children ran onto the pitch wearing PSG replica shirts bearing the names King and Legend on their backs — a reference to Ibrahimovic’s Friday tweet in announcing his departure: “I came like a king, left like a legend.”

If anyone had been in any doubt who the night was about, that was surely dispelled in the 10th minute when the ground as one rose to applaud their talismanic import.

Wearing the number 10 jersey, Ibrahimovic acknowledged the crowd as Nantes obligingly waited patiently for almost a minute before taking a free-kick.

The visiting defence seemed to oblige in more ways than one against a team clearly intent solely on setting up their centre-forward to score.

Ibrahimovic notched his first goal as he played the ball out wide on the right to Angel Di Maria, before sprinting to the back stick where he was able to chest home the Argentine’s cross on his knees from six yards out without a yellow-shirted defender in sight.

If there was one player determined to ruin the party it was Nantes goalkeeper Maxime Dupe, who made a reaction one-handed save to deny a close-range Ibrahimovic flick before then thwarting the big Swede when one-on-one as even the linesman seemed unwilling to spoil the festivities.

PSG’s desire to tee up their stand-in captain for the night took on comic proportions 10 minutes from half-time. When faced with a clear shooting opportunity inside the box, Di Maria wiggled and twisted in trying to find Ibrahimovic rather than strike at goal.

PSG finally switched back into the rich vein that had seen them romp to the title with two months to spare as Ibrahimovic and Di Maria combined to set up Lucas Moura for a simple second two minutes before the break — PSG’s 100th league goal of the season.

PSG notched their third on 52 minutes as Dupe parried a fierce Ibrahimovic free-kick, only for Marquinhos to win a sprint between three home players to tap in the rebound with not a yellow shirt reacting.

Ibrahimovic had a shot deflected behind for a corner as he took on three defenders and Dupe twice dived to his side to beat away shots before the big Swede lifted another chance over the bar as he became increasingly desperate.

But Pastore picked him out with a minute left to the stadium’s delight as Ibrahimovic fulfilled his quest.

Monaco secured the third and final Champions League qualification spot as first half goals from Ivan Cavaleiro and a Fabinho penalty gave them a 2-0 win over Montpellier.

Nice won 3-2 at Guingamp but had to settle for fourth in Hatem Ben Arfa’s final game for the south coast club.

Toulouse scored two goals in the final 12 minutes through Martin Braithwaite and Yann Bodiger to turn a 2-1 deficit at Angers into a 3-2 victory that kept them a point above Reims, whose 4-1 win over second-placed Lyon wasn’t enough to prevent them descending into Ligue 2 alongside Lorient and Troyes. – Agence France-Presse