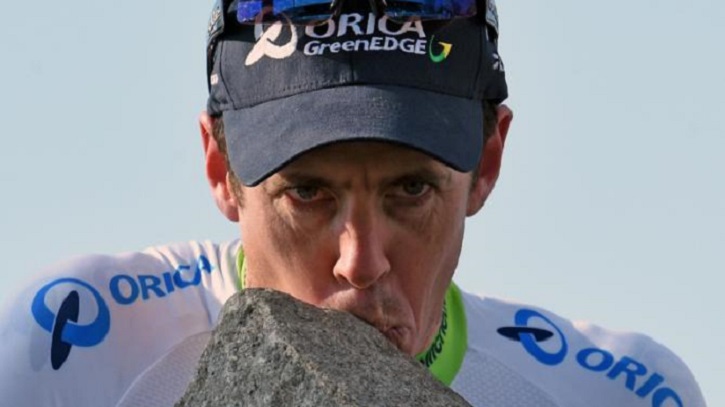 Hayman beat four-time winner Tom Boonen into second in a sprint finish in the famous old outdoor velodrome in Roubaix at the end of Sunday’s energy-sapping 257.5km ride from Compiegne, near Paris.

It was Hayman’s 17th participation in the ‘Hell of the North’ and his previous best result had been eighth in 2012.

“Roubaix is also one of the races that every few years throws up a special winner,” said the Orica GreenEdge rider.

“But if you look back, they’re pretty passionate about the race. Whether it’s (fellow Australian) Stuart O’Grady (in 2007) or Johan Vansummeren (in 2011), but there’s a number of them.

“They’ve always been there racing in the front and if all the stars are lined up, as they were for me today, then it’s possible.

“There’s a lot of riders able to live off that dream that it might happen to them one day too: I’m proof.”

Hayman’s victory was also a testament to his dogged determination.

In late February he broke his arm in a crash at Omloop Het Nieuswblad and he was initially ruled out of the entire Spring classics season.

“I’d done months and months of training that starts in October. I had spent a lot of time away, a lot of time at altitude, I’d committed a lot of time and effort to the classics and to have it taken away in one crash; I didn’t want all that form taken away,” he said.

Hayman trained hard while he was out injured, spending hours every day in his garage on the home trainer.

“Ten days before (Paris-Roubaix) I was out on the road and then I raced last weekend in Spain (in the GP Miguel Indurain).

“I had a fair feeling my legs were good but you don’t know against guys who were racing (the Tour of) Flanders, so I couldn’t have dreamt of this.”

And Hayman said it was the lack of pressure on his shoulders compared to his four rivals in the sprint finish that worked in his favour.

“I don’t win a lot of races so I’m very surprised today (Sunday). I didn’t expect it this morning,” he said.

“I have come here before with big ambitions trying to get on the podium and ride the final. I put big pressure on myself, but coming off the injury I had in Het, I was just coming here to enjoy the race.

“I love it a lot. I was just happy to be back in the team and was ready to help everybody I could.

“Today everything just fell into place. Maybe riding without that pressure helped, I could tell in the final other guys really wanted to win.”

He added: “Those guys had the pressure. Tom Boonen had to win, Sep Vanmarcke had to win.

“Sure I wanted to win but I didn’t have the pressure and could gamble.” – Agence France-Presse