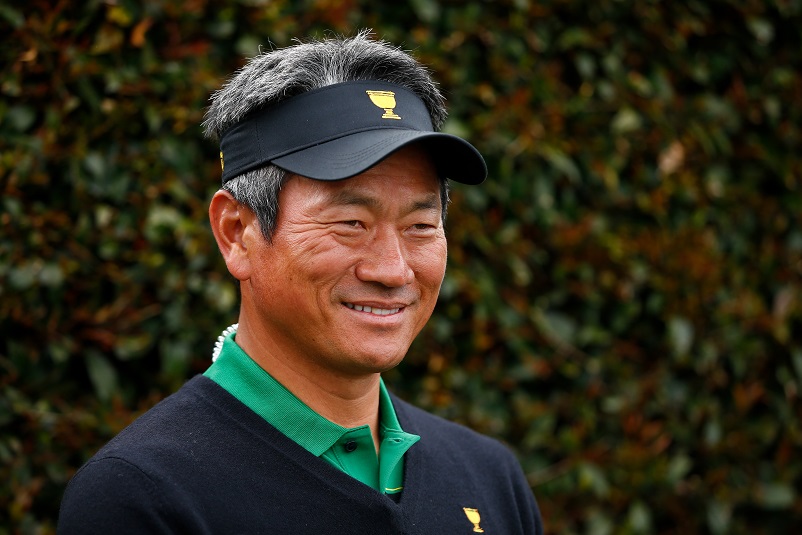 Choi returns as an assistant for the third time after serving as captain’s assistant to Nick Price when the Presidents Cup made its debut in Korea in 2015 and to Ernie Els at Royal Melbourne in 2019.

A three-time Presidents Cup competitor (2003, 2007, 2011), Choi owns a 6-8 overall record and posted a 3-2 mark in 2011 partnered with Ogilvy at Royal Melbourne. Most recently, the pair served as captain’s assistants alongside Immelman in 2019 for the team’s memorable attempt at regaining the Cup.

“It is an honor and a privilege to be selected again to be a part of the International Team as a captain’s assistant,” Choi said.

“After knowing Trevor for so many years, it is clear to me that his passion and dedication will make for a remarkable captaincy, and it makes me proud to join him in Charlotte. I look forward to working together as a team to bring unity among our nationalities into a collective representation of the International Shield.”

Choi’s professional victories worldwide include eight career PGA TOUR titles, highlighted by his playoff win at THE PLAYERS Championship in 2011. Considered one of Asia’s most successful golfers in history, Choi spent 40 weeks in the top 10 of the Official World Golf Ranking.

“K.J. has become an integral member of the International Team over the years, helping to define who we are as a whole,” Immelman said. “He is a fountain of knowledge, a calming presence behind the scenes, and commands an incredible amount of respect as one of the most decorated Asian golfers in history.”

An eight-time PGA TOUR winner, Weir is 13-9-2 all-time at the Presidents Cup and one of five International Team members with 10 or more match wins in competition.

“In addition to being captain’s assistants together in 2019 at Royal Melbourne, I have had the pleasure of being teammates with Mike on two occasions, as well as playing together on TOUR for many years,” Immelman said.

“The history we share gives me complete confidence in stating that few people work harder than Mike. I can’t wait to see the impact he makes in those pivotal moments when leadership and tenacity are needed during the week.”

In 2007, the Presidents Cup was staged in Canada for the first time, with Weir delivering a 3-1-1 record highlighted by a 1-up victory over Tiger Woods in Singles. Weir won eight times on the PGA TOUR, including the 2003 Masters – one of three victories collected that season.

The 51-year-old currently competes on PGA TOUR Champions, where he notched his first victory at the 2021 Insperity Invitational.

“When I think of highlights in my career that really stand out to me, the Presidents Cup always makes the top of the list,” Weir said.

“The comradery that continues to grow within this team is irreplaceable. We can all sense the momentum that is building, and it’s been exciting to see Trevor’s incredible dedication and focus on his role. I can’t wait to see what tournament week holds for us and to be a part of the 2022 team.”

Set to make his third stint as captain’s assistant, Ogilvy was first selected by Price in 2017 and again by Els at Royal Melbourne. Ogilvy played on three consecutive International Teams (2007, 2009, 2011), where he amassed a 7-6-1 record.

“Geoff’s love for his native Australia and for the Presidents Cup are some of the many things that make him a perfect selection as captain’s assistant,” Immelman said. “His golf IQ, calmness and experience of being a major champion makes him a huge asset to our young team.”

“After getting a glimpse into the future of our team in 2019, I am very excited to return as a captain’s assistant in 2022,” Ogilvy said. “The collection of international players has only had time to improve and that is evident when you look at guys like Cameron Smith, Hideki Matsuyama and Joaquin Niemann, who have had tremendous success on TOUR in the last year. I can’t wait to see what they bring to the table under Trevor’s captaincy.”

Joining Captain Immelman’s roster of veteran leadership as a first-time captain’s assistant is Colombia’s Camilo Villegas. Villegas has one Presidents Cup appearance (2009), contested at TPC Harding Park in San Francisco. In addition to being a four-time PGA TOUR winner, Villegas reached as high as No. 7 in the Official World Golf Ranking and represented Colombia in the World Cup of Golf in 2006 and 2011.

“Bringing in Camilo as my fourth assistant captain feels like the absolute perfect way to round out my selections,” Immelman said. “For the International Team, developing a well-rounded team is imperative. When I look at the representation among countries, languages and cultures, my ultimate goal is to blend them as cohesively as possible, and Camilo will help us do just that. Another positive is that he is still competing on Tour, so he is closely in tune with all the players and trends in the professional game.”

“When I got the call from Trevor inviting me on as a captain’s assistant for the 2022 Presidents Cup, I was very humbled and excited,” Villegas said. “Although it has been over 10 years since I played the event, I still have fond memories that are unforgettable, so joining on the other side as a captain’s assistant will be a highlight of my career.”

The 2022 Presidents Cup will be held at Quail Hollow Club, September 20-25. For more information about the Presidents Cup, or to purchase tickets, please visit PresidentsCup.com.